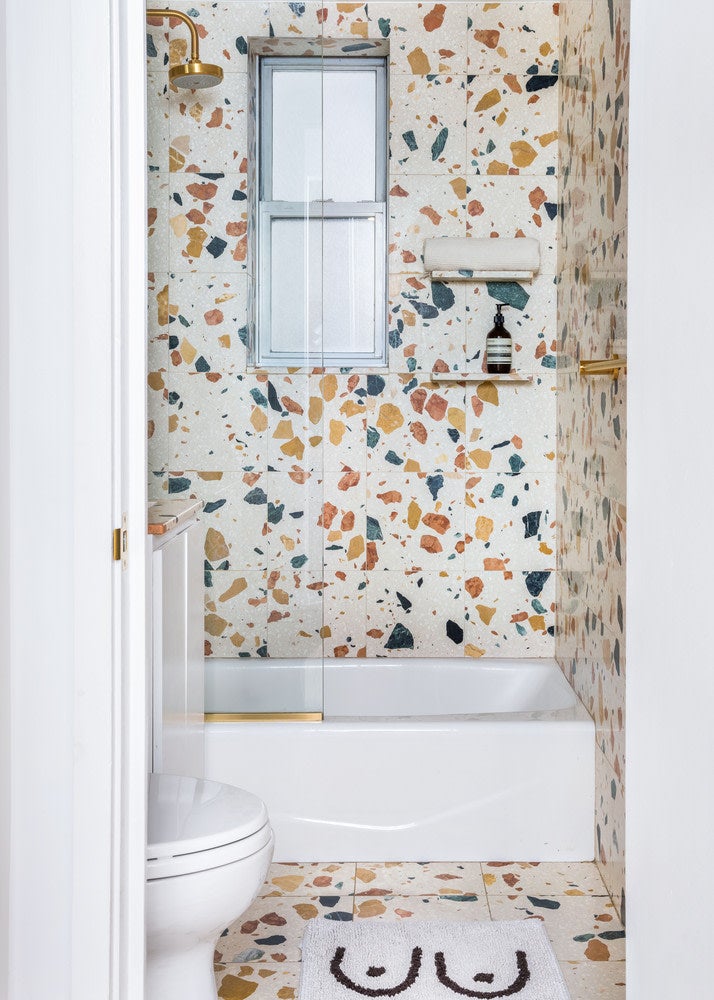 There is little we love more than a beautiful bathroom. So when we come across not one, but two of them—in the same home, no less—we pay attention. In addition to upgrading the master bedroom and dining area in her client’s downtown Manhattan apartment, designer Tali Roth was also tasked with renovating the home’s bathrooms. “What excited me was that she had an interesting aesthetic and she wanted to approach it with a lot of artistic integrity,” says Roth. “It was like we were speaking the same language.”

That language was a no-holds-barred approach to style. Spanning polar ends of the design spectrum, the two new bathrooms—one swathed in orange and green terrazzo, the other in stark white squares—offer a dynamic snapshot of her client’s dual perspective. “She lived out her two aesthetics, her two ideal bathrooms,” Roth continues. “They are just so different. But that’s what’s so similar about the two of us: We don’t really believe in interior design rules.”

Here, Roth walks us through how she navigated going from one end of the spectrum to the other.

Don’t Go Bananas With Your Mood Board

Although they were able to avoid a full gut job, Roth made a number of major cosmetic changes, like replacing the glass partition in the master bath with a solid wall. “In terms of design, my approach is keeping it simple. Sometimes people overcomplicate things,” says Roth.

The strength of each space lies in its singularity and simplicity. “I don’t like more than two materials in a bathroom,” shares the designer, noting that she finds mismatched tiles (say, a subway tile shower and mosaic vanity wall) unsettling and ineffective.

Pick Your Star Material and Run With It

The guest bathroom (a space shared by the homeowner’s two teenage daughters) is the bolder of the two, boasting a splashy terrazzo on practically every surface. While the stone didn’t come cheap, other than the hardware, it was essentially the only expense. “In New York City, the spaces are tiny. We don’t have the same opportunities as other people to create spaces from scratch,” says Roth.

Think of Grout as Eyeliner

In the master bathroom, Roth stuck to a strict linear scheme inspired by a pattern her client had seen in a hotel bathroom in Paris. “The challenge was obviously lining up the lines, because we wanted it to be a trippy kind of grid,” she explains.

Having chosen a grout that was too light in color the first time around, Roth admits they had to go over the lines again with a darker option for added definition and drama. The second layer paid off.

In addition to the fresh tile work, Roth also expanded the recessed medicine cabinet above the guest bath’s vanity for added storage. The two mirrored doors further contribute to the checkered nature of the space. “I felt like it would really reflect the grid of the space, yet it wouldn’t impose on the design and it would give her double the storage,” she explains. “We didn’t want anything too decorative. We just wanted it to be black and white.”

Most people would downright fear a windowless, all-white bathroom, assuming it would have a sterile and unwelcoming atmosphere. The key is conviction—Roth’s client owns the look. “It’s such a strong bathroom because of the repetition. People might not like it, but they can say she committed to it,” says Roth. “If you’re going to do something like that, you either do it or you don’t.”

Life is too short to have everything be the same. “While I like the idea of all bathrooms being similar in a home, this is a bathroom renovation in a space she’s had for eight or nine years,” says Roth. “I think you should live out your dreams. You should smile when you walk into your bathroom.”

This story was originally published on June 28, 2018. It has been updated with new information.

See more bathroom ideas: Two-Tone Bathrooms Are Having a Moment—Here Are Our Favorites How to Upgrade Your Bathroom Without Spending a Fortune How to Make It Rain(forest) in Your Bathroom