A splash of color and then some. 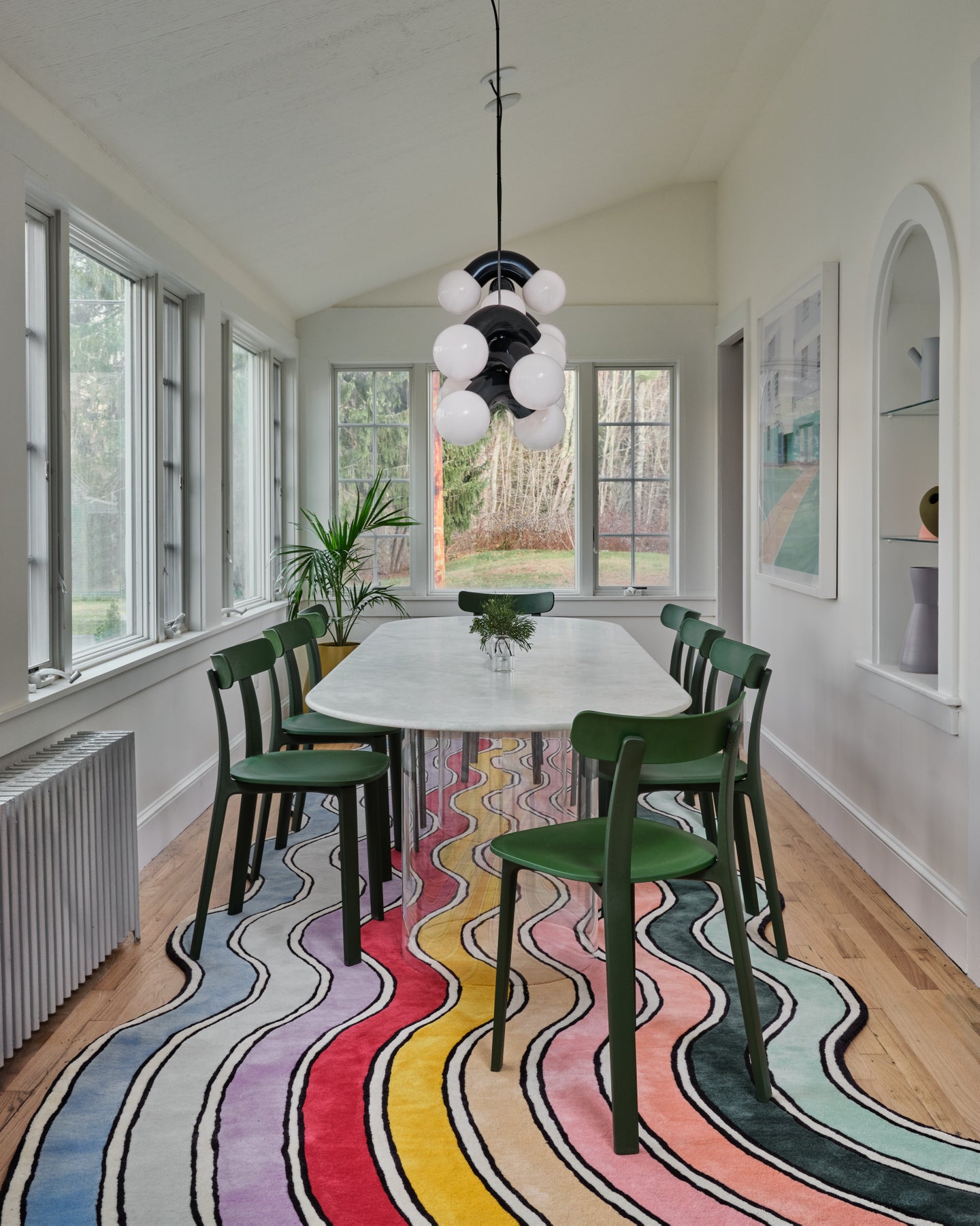 A rippling rainbow rug sounds like a design unicorn, but in a new vacation rental in Kennebunk, Maine, the carpet is all too real. The 60-foot number is the work of Pieces by An Aesthetic Pursuit, a furnishings line run by Jenny Kaplan; her husband, Chris Corrado; and their business partner, Taisha Coombs. Since launching the brand, it has become known for its bold aesthetic, which even Kaplan admits is too much for some people. So they created a space where vacationers can experience the items firsthand, then stay a little while. “We wanted to show that you can use our products in a very refined way,” says Kaplan. “It’s not necessarily kooky or crazy.”

Kennebunk was an easy choice for the company’s first-ever shoppable Airbnb (Corrado is from the quintessential New England town and Kaplan grew up 20 minutes away in neighboring Eliot). The hard part was the renovation, which Corrado’s contractor brother, Paul, took the lead on. What the trio thought would be a six-month remodel of an 1878 house turned into a yearlong project. “Every time we opened up a wall, there was a new surprise,” says Coombs.

Once the major construction (a brand-new kitchen, a fourth-bedroom addition) was out of the way, they set the tone with Pieces products, like the meandering rug they designed specifically for the horseshoe-shaped living room. There’s no pot of gold at the end—just really chic furniture. Kaplan and Coombs give us a tour.

While most of the items in the home are Pieces products, Kaplan partnered with other makers, such as AndLight, Uprise Art, Eny Lee Parker, and, chiefly, Vitra, to elevate the space. The Swiss retailer’s polished 20th-century seating, like the hunter green dining chairs and Grand Repos lounger, instantly brought a sophisticated vibe to the childlike rug.

Paint Isn’t Meant to Be Taken Too Seriously

Kaplan looked for subtle ways to create cohesion in the main living space. Not wanting to overwhelm the senses, she kept the wall color neutral and, instead, opted to paint the ceiling and the fireplace with Backdrop’s Not So Delicate color. The faint lavender-gray helps to visually separate this “zone” from the kitchen. In one of the bedrooms with sloped walls, she did the exact opposite, painting three-quarters of the room light green and leaving the ceiling white to create the illusion that the room is taller than it really is.

“Every time we opened up a wall, there was a new surprise.” —Taisha Coombs

Glass Blocks Are the Windows You Never Knew You Needed

The biggest question the group faced during the reno phase: Where do we put the fourth bedroom? The most obvious place was an “awkwardly large” living area on the first floor. Knowing the small space would lack a window, they incorporated ’80s-era glass bricks into the structure of the walls. “It filters in light from the window on the other side but also adds privacy,” says Coombs.

Stair Runners Don’t Have to Be Basic

Kaplan describes the original condition of the stairwell as a “total mess.” “We didn’t know what to do with it,” she says, recalling the dirty railing, dingy runner, and chipped paint. One solution was to paint the steps a solid color, but Kaplan and Corrado had a better idea: an ombré rug, which they took one step further by adding a matching one at the bottom.

Break Up a Small Space With a Bed

Kaplan threw out the rule book in the largest suite by placing the bed in the middle of the space so the powder-coated screen headboard could act as a divider of sorts between the sleeping zone and the closet. “It instantly created a separate changing area,” she explains.

“We wanted to show that you can use our products in a very refined way.”—Jenny Kaplan

Piece’s new Dose Coffee Table (coming soon) is topped with the same green granite used for the dining room table, except this piece is also swathed in tufts of fabric. “You can break it up and use [the parts] as side tables in a larger space or just buy one,” says Kaplan.

Plan All You Want—Mistakes Still Happen

When Coombs and Kaplan reflect on what they’ve learned, the shiny new refrigerator stands out. They bought the fridge shortly after purchasing the home (at this point, they were thinking they’d have the place done in six months, plus the appliance was on super-sale at the time). As the renovations—namely, the cabinet installation—took place, time went by and it sat in its box in the garage. When it came time to put the fridge in place, they discovered it was way too big for the nook they had carved out.

“Our options were to buy a new fridge or sacrifice the pink Rosa Portogallo countertop,” says Kaplan. Concerned that a much smaller one wouldn’t be able to accommodate eight guests’ needs, they chose to trim the stone. Because the surface was already so narrow, there was a strong chance it would crack under pressure. “We took a gamble,” says Kaplan. The risky decision worked in their favor. Maybe that rainbow was good luck after all.

See more stories like this:  When Costs Kept Rising, This Couple Built Their House Themselves Antique Yellow Doors Convinced an L.A. Shop Owner to Escape to the Desert In Alyssa Coscarelli’s New Apartment, the Closet Looks Like a Store