Snoopy and Saarinen can hang out together. 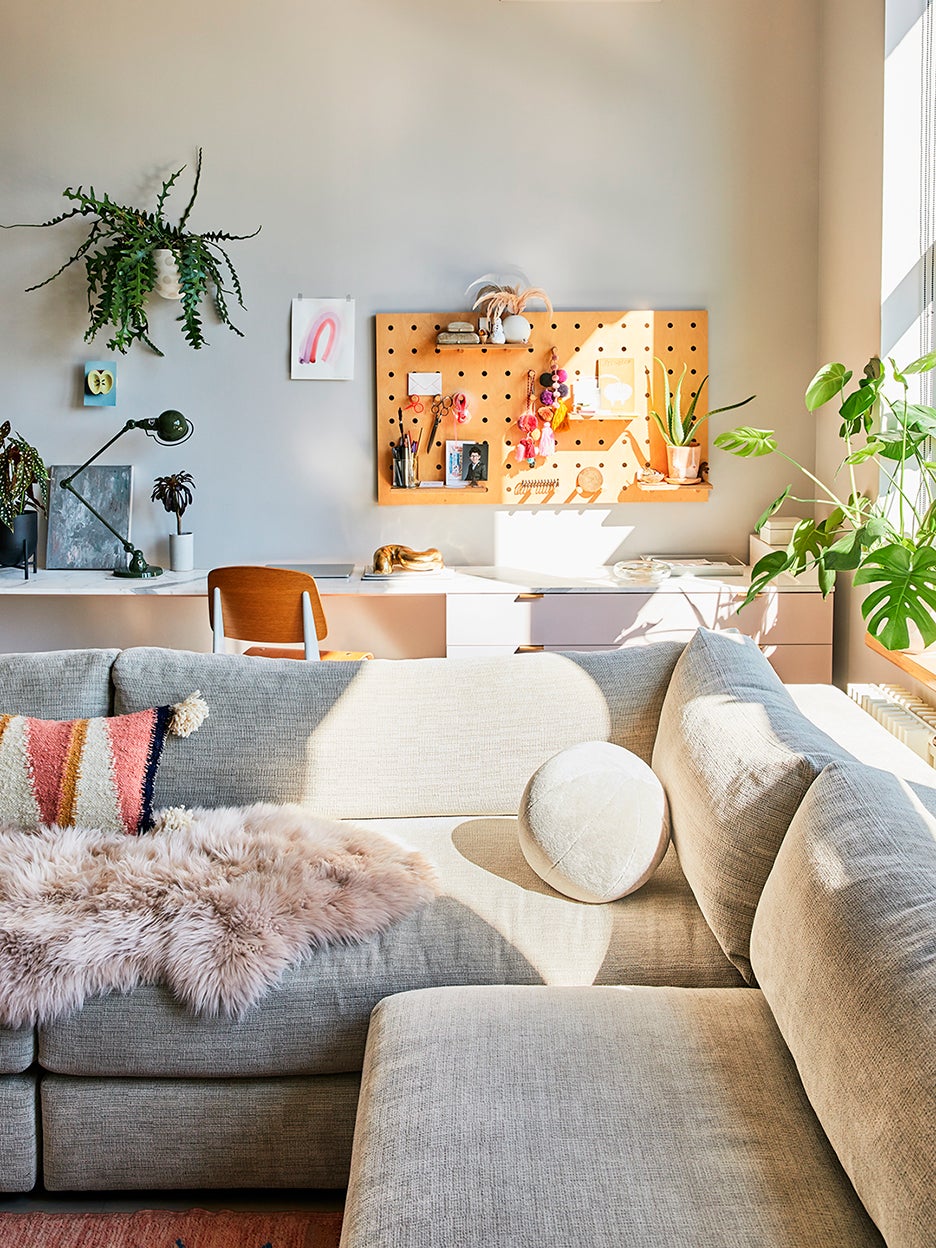 For clues as to what makes prop stylist Randi Brookman Harris tick, one needn’t look any further than the large wood pegboard hanging above her in-home workspace. In one corner, a portrait of her son, Marlowe, is positioned alongside art supplies aplenty; a few pegs over, a coaster sits poised to protect the sprawling marble wall-mounted desk she designed herself. Elsewhere there’s a potted plant, a beloved book, and assorted curiosities arranged in thoughtful clusters—one in particular, a tiny snowman, presides over the assemblage from the board’s highest shelf. “That’s something I built out of clay in nursery school,” says Harris. “It reminds me that I’ve been doing this forever.”

The stylist’s knack for creating—and for curating—is clear not only in her work (clients include Google, Warby Parker, and Sesame Street), but in the design of her Brooklyn home, which she shares with her husband, Jacob, and 9-year-old Marlowe. There’s evidence of her collector’s nature everywhere: In the kitchen, cookware in various shades of white and cream line four tiers of open shelving; opposite the sofa, an expansive gallery wall shows off years of found favorites.

And while the space contains its fair share of serious statement pieces—a treasured Eames La Chaise chair in the bedroom, for instance, and an Andrew Neyer light fixture over a Saarinen dining table—there’s still plenty of room for play. Here, toys are displayed as prominently as art. In Marlowe’s pattern-filled bedroom, cars, books, and Harry Potter figurines populate a tower of vertical shelving. In the living room, thousands of Legos are categorized by color under a row of IKEA storage lockers (meanwhile, an entire cityscape, one of Marlowe’s recent masterworks, sits on top).

Even so, the space maintains a sense of comfort and calm. The aforementioned sofa, purchased from Homenature, is so cushy it immediately summons sleep (“It’s ruined my ability to imbibe culture,” Harris jokes), while the main bedroom, which features black walls and blush pink bedding, serves as an enveloping oasis. Even the stylist’s workspace—with its waterfall desk, a custom project that took a year to complete—emanates a certain seductive serenity.

**“As soon as I got a storage space, it was like we could breathe again.”**

Harris explains that the nature of her profession has led her to pare back on over-elaborate styling at home. “When I went freelance 10 years ago, I was living among so many things,” she says. “As soon as I got a storage space and I put a ton of things from the house over there, it was like we could breathe again. I didn’t really want to live like that anymore.”

Still, her talents aren’t lost on her son, who has begun exhibiting styling proclivities of his own, arranging toys and art projects in vignettes on his shelves. “He tries to do it on his own sometimes, which makes my heart want to explode,” she says. “He’s seeing me and I’m seeing him. It’s a wonderful feedback loop.”