How One Blogger Renovated Her Bedroom in Just 6 Weeks

She used 3D renderings to completely transform the space. 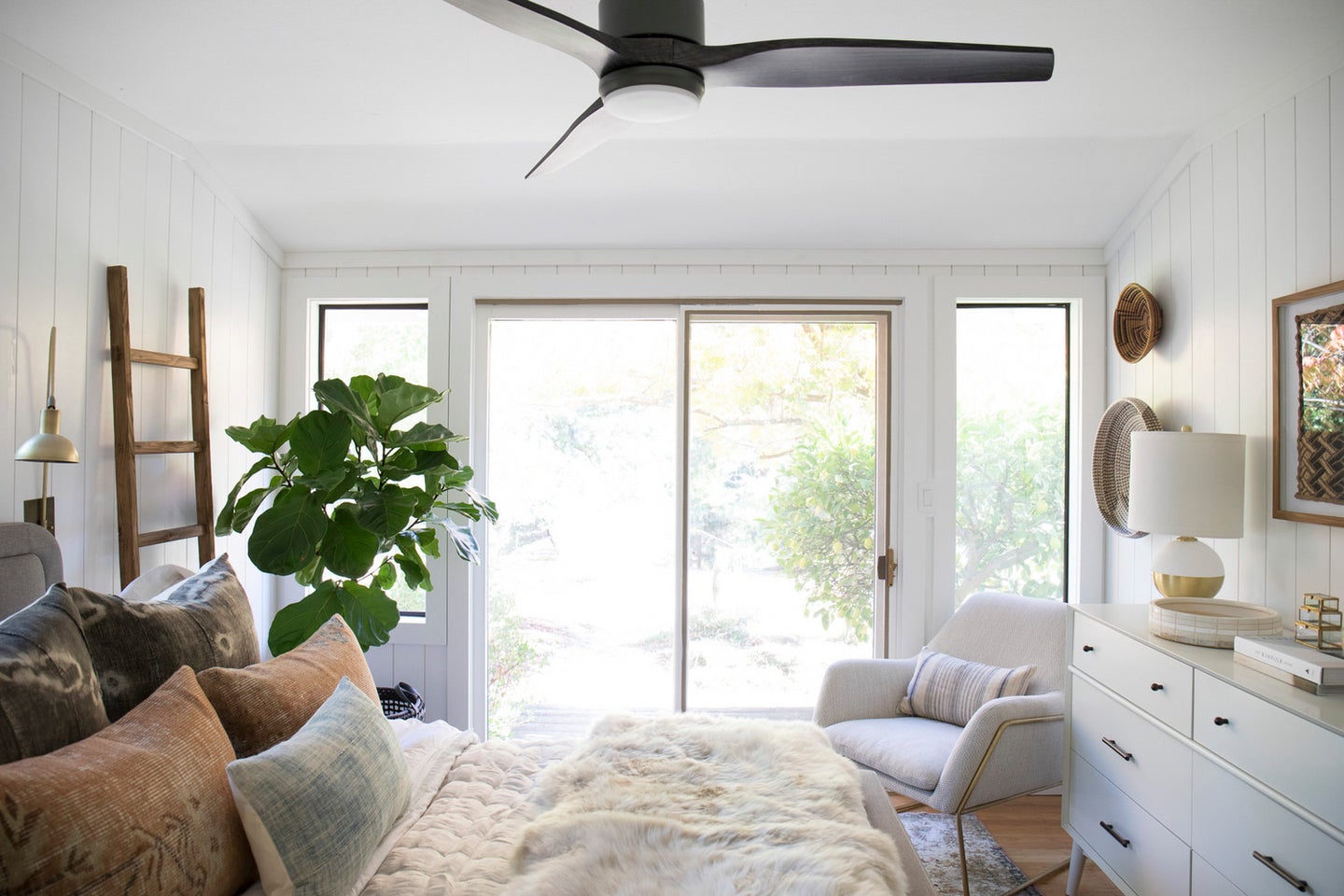 If there ever were a case to be made for making dramatic renovations on a time crunch, this previously neon-hued bedroom would be it. We’re going to conjecture that the highlighter orange is an acquired taste; and while we’re not entirely sure what aesthetic the original homeowner was going for with that bold color, the new space couldn’t be more different.

“This room needed a major overhaul—it was definitely the first room on our hit list,” says Brittany Chinaglia, the blogger, designer, and owner behind The

. “Before we even moved in, we were planning painters. Even the bathroom was too much.”

While the bathroom benefitted from a quick facelift, the bulk of the work was done in the master bedroom, which measures in at 14 feet by 14 feet. Chinaglia teamed up with Modsy, an online design service that provides 3D renderings of a room, to complete the room in just six weeks.

There was already a clear starting point in place: The massive sliding door and adjacent windows, which let in tons of natural light and provided a direct view of the backyard. That was one of the reasons Chinaglia and her family bought the home in the first place, so she set about designing a room that would best reflect the indoor-outdoor vibe created by the view.

“We purposely wanted to prioritize the space we were sleeping in because we didn’t do that in our old house, and you should want to spend a lot of time in your bedroom—especially with a view like that!” says Chinaglia. “We really wanted to design around this bright, naturally lit space and have it feel light and airy. Once we removed the orange, it became so much bigger and better than we ever thought.”

The orange was replaced by the more on-trend shiplap—something Chinaglia was particularly excited about—which instantly cleaned up the room and set a neutral backdrop for the furniture. In terms of decor, Chinaglia had two main pieces she wanted to focus on: an upholstered bed (with a footboard), and a rug.  Her site is called

“I definitely started out with the rug,” she says of her style inspiration for the space. “I’d been eyeing it for a while and was really concerned with how it would fit in the space. That’s where Modsy came to the rescue. It was an investment, and I didn’t want to jump in and spend that money without understanding if it would fit or match the bed… using the tool to visualize how it would fit was useful.”

Her background in design helped with conceptualizing the space and implementing certain choices, but Chinaglia maintains that Modsy was instrumental with the logistics. The rendering tool proved especially useful, determining the layout and scale or the room and helping narrow down items with which to fill empty spaces.

“I learned about Modsy’s program after seeing another home blogger use them to redo the nursery. I was blown away by how realistic the rendering tool looked; I remember thinking man, you can really make confident decisions on purchasing products based on this!” she says. “I know there are a couple different ways you can use Modsy, but I worked with one of the designers, gave them a list with everything I was about to purchase, and they turned it into this beautiful rendering which gave me the confidence to be able to execute everything.”

Rug in place, Chinaglia stuck with a relatively neutral color palette for the rest of the room, relying on natural textures and subdued hues to warm up the space. Layered quilts and pillows on the bed add interest and keep it from being too one-note; woven bowls and a couple pieces of art dress up the otherwise plain walls.

“That’s just my approach to designing a room—keeping the underlying foundation, the bedding, maybe the shams, neutral. Because think about it: You probably tire of the throw pillows every six months or so, and you can change things like that out seasonally. My philosophy is to have a pop of color in things easily interchangeable, like throw pillows or blankets or even flowers,” says Chinaglia.

She took a similar approach when navigating the balance between old and new. Given the nature of her work, which includes sourcing vintage and one-of-a-kind pieces from around the world, there are of course those more “found” items scattered around the bedroom: bespoke peachy orange pillows made out of

a few sculptural decor items on the nightstand, and, of course, the rug.

But the base of the room is actually fairly contemporary in stark contrast with the more antique-looking pieces, and that’s how Chinaglia describes the finished aesthetic. Clean and modern, yet eclectic and collected.

“My approach is that the things that are more contemporary should be the ones that last the longest, the most permanent items,” explains Chinaglia. “It’s the same philosophy of having a neutral base. Maybe there’s a modern base, but you can layer in things that have personality and are vintage; something that caught your eye at the flea market or something that was handed down to you.”

See more before & after stories: