A recent New York transplant wanted a home that felt “warm and considered,” not stuffy or showy. 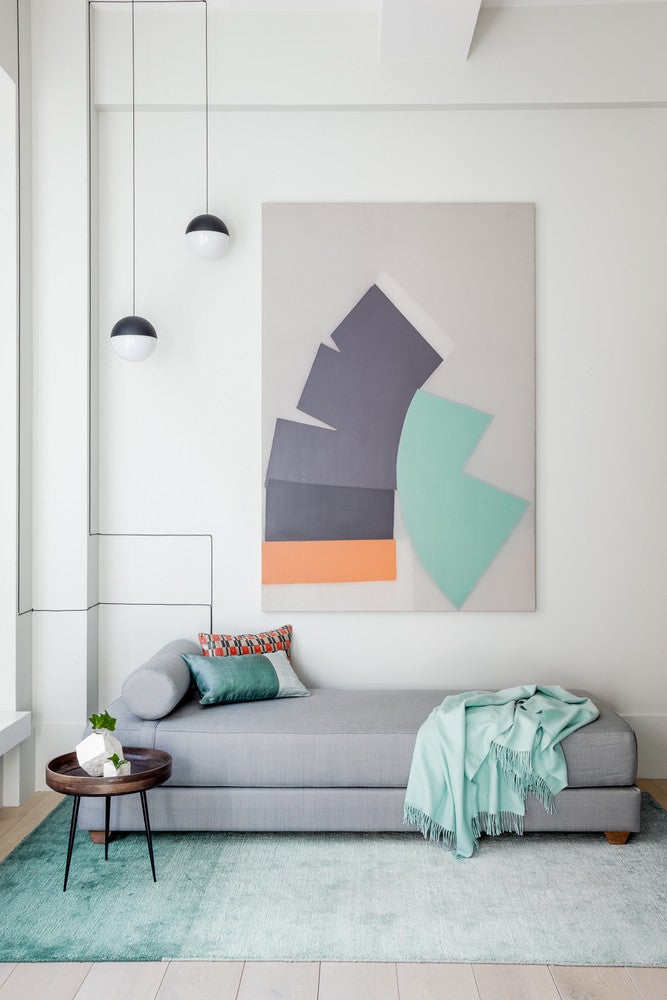 New-build condominiums are a fixture of the Manhattan skyline. From the rarified world of 252 East 57th Street, which opened in March, to 53W53, the Jean-Nouvel designed residential tower being built next to the Museum of Modern Art, there are luxe skyscrapers aplenty, with the price tags to match.

But, the owner of this spacious two-bedroom loft in Midtown South wasn’t interested in living in a place where the interior felt showy. When she commissioned French-born, Brooklyn-based Fanny Abbes of The New Design Project to decorate her newly purchased loft last year, she asked for a home that felt “warm and considered,” not overly designed.

The recent New York transplant did want something “more modern than you’d normally go for with such an address,” says Abbes of the Piet Boon-designed Huys Condominium on Park Avenue South. But it needed to feel fresh and elegant.

advertisement
In the light-filled living area—courtesy of soaring 11.5-foot ceilings and oversized casement windows—Abbes chose a low-slung Casa sectional by Los Angeles brand Camerich and kept the rest of the color palette neutral. Round concrete side tables by Bevara were brought in for visual interest, as were chairs based on Hans Wegner’s CH25 design from 1950. Replicas of another mid-century classic—Poul Kjærholm’s PK61 glass coffee table from 1956—were chosen to enhance the ethereal vibe, allowing light to pass through.

Creating a banquette that runs the entire length of the half wall was the starting point for the dining area, says Abbes. On the wall opposite, Restoration Hardware’s Lucent Round Mirror picks up on the brass of the frosted glass chandelier hanging over the table while a trio of Saarinen Executive armchairs, sourced from Design Within Reach, are seated beneath.

In the guest bedroom, the starting point was an abstract painting the owner already had in muted pastels and grays. CB2’s Silver Grey Sleeper Daybed provided a sleek, space-saving solution, which Abbes carefully layered with a few choice textiles from West Elm and Room and Board.

Stepping into the darker bedroom, with its dusky gray paint and turquoise accents, feels like entering another world, says Abbes, which was exactly the point.

“We painted everything—the baseboards, the doors, everything,” she says, with the aim of underscoring the peacefulness without drawing attention to millwork. “It’s the same color everywhere,” she says. “Your eye doesn’t stop at the architecture.”

Across the room, opposite the custom nightstands and cantilevered Crane Light by Andrew Meyer, Abbes created a dreamy window seat with sculptural Kreten side tables by Brooklyn design studio Souda and a nine-globe brass chandelier based on Lindsey Adelman’s famous Branching design.

“I thought you could create a nice little moment, where you want to sit there, have a cup of tea, almost like a nook within a nook,” she says. An apt description for the loft itself.

Inside a Playful, Fashion-Forward Paris Home This Cali Home Is the Definition of Bohemian Modern A Nashville Home Where Bold Prints Mix With Soft Pastels