“It told us what worked and what didn’t.” 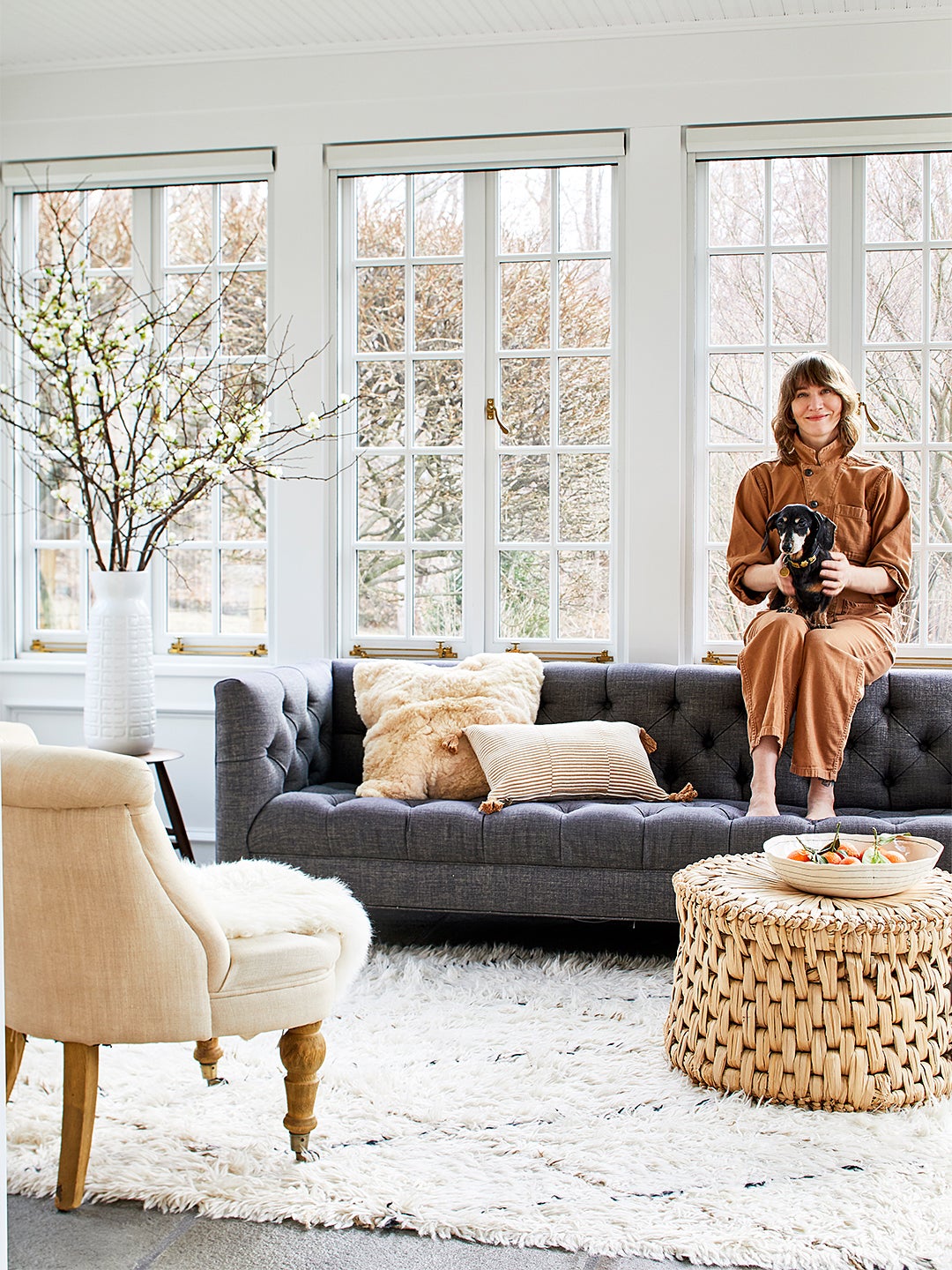 Melissa Lauprete credits all the big life changes she’s made in the past three years to her 1942 Colonial-style house in Tarrytown, New York. At the time she came across the listing, Lauprete and her husband, Matt, were living in a condo in Brooklyn and she was feeling the pressure of the city. “We were craving nature,” she says. After winning the bid on the property, Lauprete left her 17-year-long career in advertising and opened up At Land, a modern shop and drink bar in Dobbs Ferry where you can get on-tap kombucha or browse brass serveware, bottles of perfume oil, and more. The space is a stone’s throw from the couple’s retreat.

While their initial plan was to find a place that needed to be fixed up, this home barely required any updates. The previous owner, now a friend of the couple, had lovingly restored the house, so they made only small tweaks, like ripping up the carpeting on the stairs, swapping light fixtures, and touching up the paint. “She left us these gorgeous mementos—blueprints, photos of it being built, things that bring the house’s energy into our lives,” says Lauprete. Not all new chapters are scary; here, the At Land founder looks back on the fresh start.

Let the House Tell You What to Buy

Lauprete jokingly compares the home to a living creature that needed to be fed properly. “It told us what worked and what didn’t,” she says. Their style started to shift accordingly: The couple began scavenging for antique furniture (like an old lacquered train cabinet) from the ’40s, an era they’d never particularly been interested in before. And the clean, modern rugs and runners Lauprete had brought with her looked out of place, so she drove up to Albany to purchase vintage Persian ones, which were more ornate than she was used to but shined against the dark wood floors.

Wait for the Right Sofa

It took seven months for the couple to figure out their living room seating, but patience is a virtue, as they say. They custom-ordered the couch from Pinch in London through The Future Perfect—the dimensions had to be reduced so the piece would fit between the windows. Lauprete made sure to purchase extra navy linen fabric to use on two bespoke Sawkill chairs, as well. “It brought a sense of modernism and cohesiveness to the room,” she says.

Allow Greenery to Do Its Thing

Their biggest debate continues to be whether or not to prune the fiddle-leaf fig. “I always win the argument,” says Lauprete. The tree, which has been left untouched, hits the ceiling and is starting to curve back down to the floor. But the plant couldn’t be happier with its weekly watering and organic fertilizer when the warmer months roll around. “We’ve always hoped for a fiddle-leaf with even branches, and we always end up with the ones that go all crazy,” she says. Lauprete recently added a stake to the pot to support the trunk, crossing her fingers it will balance itself out.

Since the sunroom doesn’t have any heating or cooling systems, the pair can usually only get away with using the space in the summer, fall, and spring. To maximize their time there, Lauprete brought in a bright white shag rug from ABC Home (to warm things up when temperatures drop) and a vintage table with folding legs and a glass top that can be used for dining and entertaining.  The last owner painted the pinewood boards on the wall with white paint, giving the space Nordic-cabin vibes.

Lauprete has quite the collection of sustainable sheepskin—not because she loves them, but because her dogs do. The pups gravitate toward the fluffy throws when they want to lie down. In order to keep their paws off the nice linen sofa, she’ll toss the blankets on other, more durable chairs, so they flock to those places instead. “We’re strategic about it,” she says, laughing.

Don’t Give Up on Your (Decor) Dreams

If Lauprete could have had lighting company Workstead design her whole home, she would have. Instead, the couple splurged on two of the brand’s Orbit sconces ($985 each) for their bedroom—that was as far as their budget could stretch. But then, Matt’s mother, who lives in Manhattan, spotted a Workstead pendant lamp at a Housing Works store in the city. The thrifted find was only $200. “Our home is a combination of beautiful things she’s found or gifted to us,” says Lauprete. The light now enjoys a prime spot over the kitchen bistro table, where Lauprete often sits and works while watching the dogs play in the garden outside.

See more stories like this: How a Couple Created Storage Space From Scratch in Their Brooklyn Apartment You’d Never Guess This Luxe Berlin Home Is Full of eBay Treasures Madelynn Furlong’s Little Slice of Paris in Los Angeles