A Malibu Home Gets a Tuscan-Inspired Makeover

A dreary, dated home becomes an airy haven that blurs the boundaries of indoors and out. 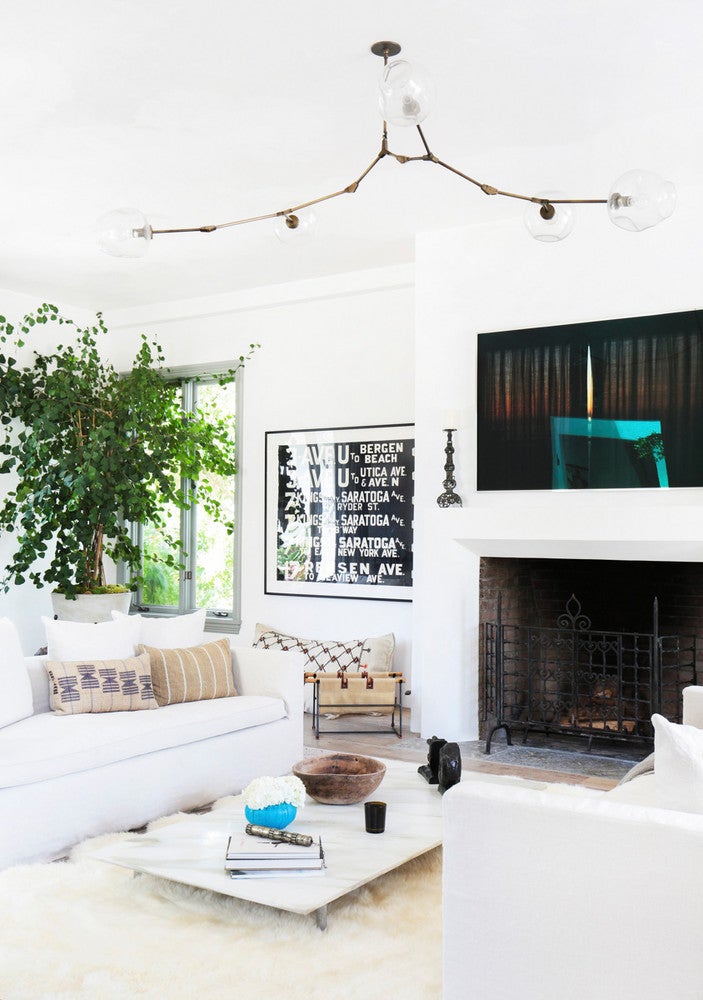 Interior designer Vanessa Alexander first saw this Malibu home when she, her husband, and their three sons were in search of a rental property. They’d recently sold their home and needed a temporary place to live as they contemplated what to buy next. But the house, at the time, “seemed like a crazy train wreck,” recalls Alexander. “It was very dark, with all this dark wood and the rooms were all chopped up. I just couldn’t imagine living in it even just for a while.” The family soon found another rental, but the place in Malibu stuck with Alexander.

As unappealing as Alexander found the house, the attributes of the lush landscape were plentiful. “The house is by the beach with views of the ocean, but not on the beach. There are amazing views of the mountains and lots of mature trees,” says Alexander. “You can’t all find many places like it around here.” While the house itself needed work, it had ample square footage—which was a huge bonus, since permits for expansion in the area are tough to obtain.

“Suddenly it just dawned on me that we could really transform the house,” says Alexander. Her vision was to create a California beachy version of a Tuscan farmhouse. “Everyone thinks a Tuscan-style house should be all about gold tones and scrolled ironwork,” she says. “In reality though, in Tuscany there are lots of very simple, boxy structures.”

As soon as the house was hers, Alexander got down to business. The house was taken down to the studs and gutted entirely.  “There was nothing cohesive about the materiality of the house—there were parquet, bamboo, and mahogany floors, as well as green marble and black and white tiling,” recalls Alexander, who selected a tonal palette with subtle hints of color for contrast. “The new design is much more organic to the land outside.”

White walls are raw plaster, which was hand-done and exhibits variation in texture. Trim is painted in a custom shade of light to medium grey. Aged French limestone sheaths the floor in the foyer and transitions to the 10-inch reclaimed scaffolding planks throughout the home. “The planks are very pale wood, which feels both hearty and rustic with a blend of casual elegance,” says Alexander.

In its previous incarnation, the house had few windows that capitalized on the astounding views visible from the back of the house. “Most of the windows faced the street,” says Alexander, who made sure the new design incorporated multiple expansive windows at the back of the house. “Our whole focus with the house was to create an indoor outdoor flow,” says Alexander. “In all my projects, I make sure the house has a connection to the environment.”

The outdoor pool was rebuilt and a rustic pergola was created to provide shade over the ample outdoor living area. A free-standing sauna was constructed by the pool along with an al fresco pizza oven; and 20 olive trees were added to the lush landscape.

The enhanced interior layout involved combining several small rooms to create an open floor plan. The new soaring two-story entry hall exudes a bit of drama upon entering the house that segues to a great room with understated elegance and plenty of comfort.

To create a rich, layered appeal, Alexander blended contemporary, custom, and vintage pieces from a variety of periods. Atop the antique Khotan rug, white custom designed sofas are plush and inviting. Mid-century flourishes include two leather Marco Zanuso chairs; above hangs an oversize photograph of the Paris Opera by Bill Henson. The mod branch Lindsey Adelman light fixture is a focal point.

The Alexanders purchased the free-standing, 20th century, marble-topped island in the kitchen before plans had even been drafted for the renovation. Pendant lights by Obsolete date back to the 1930s and are crafted of oxidized iron and glass. While the former kitchen featured dark wood upper cabinetry, the Alexanders opted to keep the walls clear in favor of a couple of open shelves and lower cabinets with plenty of storage.

In the adjacent dining room, a custom round table is accompanied by vintage Knoll fabric upholstered in ultra-resilient outdoor fabric. The striking Workstead Industrial Chandelier can be reconfigured multiple ways.

On the second floor, the master suite had previously been accessed through a closet, which first lead to the bathroom, then the bedroom. “It was really odd,” says Alexander, who had the hallway reconfigured so the bedroom was accessible directly off the hall. The spacious room now contains a custom bed designed by Alexander paired with 1960s bedside tables.

The bathroom has a decadent vibe, with a fireplace and Agape freestanding soaking tub.

A guesthouse on the property was transformed into Alexander’s office, where mid-century furnishings are combined with early antiques and mod accents. An early American table is paired with Mies van der Rohe chairs while industrial bookshelves were scored at a local auction. In another section of the office, a rare vintage wall lamp by French industrial designer Serge Mouille illuminates an Eero Saarinen table.

Juxtaposed together, the pared down grace of the mid-century elements and the rustic qualities of the pale wood plank floors and exposed ceiling rafters, the office, like the entirety of the home, creates a striking, inimitable symmetry.

See more chic before and afters:

This Eclectic, Colorful Home Was Once Completely BeigeBefore & After: A Mod Farmhouse Gets An Industrial MakeoverA ’70s Era Pool House Gets a Beachy Modern Makeover