An exposed brick wall and a spiral staircase checked all the boxes. 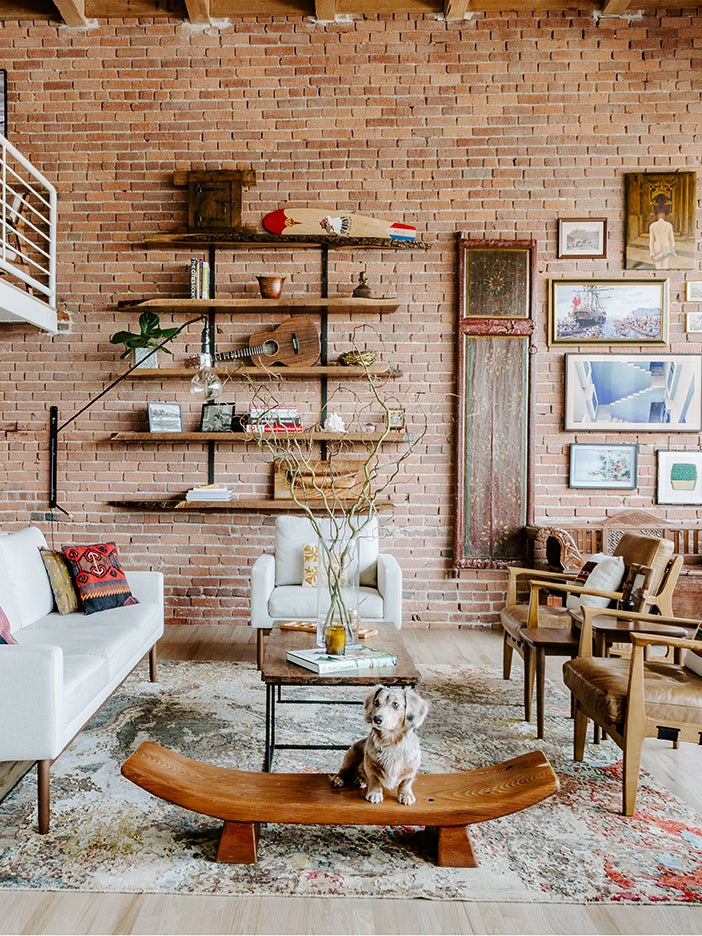 In 2019 Charlotte and Heimata Rutgers found their dream Brooklyn apartment. Except they weren’t in the borough—they were in Denver. “The first thing we said was we’re not touching the bones,” recalls Charlotte. Out of the 30-something places the former New Yorkers looked at upon moving to Colorado (the couple relocated to the city so Heimata could join his family business, Rutgers Construction), this circa-2000 industrial loft situated in an old mining warehouse had the least wonky layout. Heimata compares the main 25-by-35-foot living space to a big box. “It’s got 18-and-a-half-foot ceilings, so you walk into this incredible volume,” he says.

While Heimata led the day-to-day work during the renovation, their longtime friend, NYC-based designer Chris McGovern of McGovern Project, oversaw the big picture (mostly via FaceTime and by using 3-D imaging tools like Matterport). “We joked a lot that the project was to ‘de-orange’ the place,” says McGovern. There was wood everywhere, and most of it, like the red oak floors, had been coated in sealers that made it look extra-shiny. Luckily it was nothing that some stripping and new stain (mixed with a hint of white paint) couldn’t neutralize to make it feel a little less Western and a bit more Williamsburg.

Charlotte’s newfound love of cooking informed the kitchen’s extra-large island. The surface provides plenty of prep space; acts as a gathering point when they’re entertaining; and holds a ton of items within its flat-panel walnut cabinets, including an overflow of wedding gifts. There’s also ample walking room (McGovern made the gap between the island and the range wider than the standard 42 inches). “If there are multiple cooks in the kitchen, you’re not squeezing everyone in,” he says.

The only thing Charlotte settled on was sticking with the original electric stove. (They couldn’t switch over to gas due to a coding issue.) “It was a good opportunity to not spend money on something we didn’t absolutely need anyway,” she says.

“It was a good opportunity to not spend money on something we didn’t absolutely need anyway,” says Charlotte.

During the construction phase, Charlotte and Heimata moved in with his 90-year-old grandmother, who is originally from Tahiti. An unexpected benefit: She had her hand in helping the pair decorate. “She gave us all these family heirlooms, which was a bonding experience,” says Heimata. “And it gave her something to look forward to.” His dad also weighed in by carving bowls, now on display in the kitchen, and a Mooréa-inspired bench that happens to be a perfectly sized perch for their dog, Romeo.

Heimata’s advice for anyone considering an apartment renovation: Don’t attempt to tackle the demo yourself. “You have to really think about the logistics of getting the trash out of the building,” he says. For two months he would load up debris into garbage bags, put said bags on a dolly, and lug them downstairs to the front of the building. “And I would do that alone,” he adds.

Though she’s a Philadelphia native, Charlotte tapped into her Argentine heritage for the details, bringing in quilts and fabrics that she received from her parents. A large landscape drawing by her artist aunt, who lives in the small northern province of Salta, hangs in the living room near a Samsung Frame TV. “It shows the Andes Mountains, but it reminds me so much of Colorado and living near the Rockies,” she says. The exposed brick wall went untouched everywhere except the guest bedroom, where it got a crisp coat of white paint.

Initially there was talk about reorienting the spiral staircase that leads to the lofted bedroom, but after scoping out similar units, McGovern made the call to keep it where it was in the name of resale value. “This isn’t their forever home, this is their ‘new Denver place,’” explains the designer. “If they needed to turn around and sell it tomorrow, they shouldn’t be overinvested.”

“When you live in a loft, you have to embrace it,” says Heimata.

In the bathrooms the new rustic reclaimed-oak vanities riff off the existing Douglas fir beams. While you can’t tell from the outside, the wall that separates the main bedroom from the bathroom is a workhorse: It holds the electrical and plumbing for both spaces, as well as the recessed medicine cabinets. “It’s really serving double duty,” says McGovern.

While Heimata and Charlotte were accepting of all the quirks that come with loft living (noises from guests in the kitchen, visitors getting a peek at your bedroom), they weren’t willing to compromise on sleep. A quick fix: automated roller shades. “When you live in a loft, you have to embrace it,” says Heimata. “We were never going to pretend it wasn’t that.”

Our favorite local home store: Bouquet Flower Shop and Gift Shop. Sadly it closed during the pandemic, but we loved all the great arrangements it would prepare and also the little knickknacks.

Our best splurge: The two large slabs of white Brazilian quartzite that make up the oversize kitchen island.

Our number-one save: Repairing and re-staining the red oak floors and stair treads with a birch finish.

Hardest-working plumber in the business: Supra Services. It specializes in old loft-style commercial buildings and knocked the job out quickly.

The craftsperson we’d recommend to a friend: The cabinets were sold by Wedgewood Denver, which did a great job detailing and producing a high-quality kitchen system at a good price.