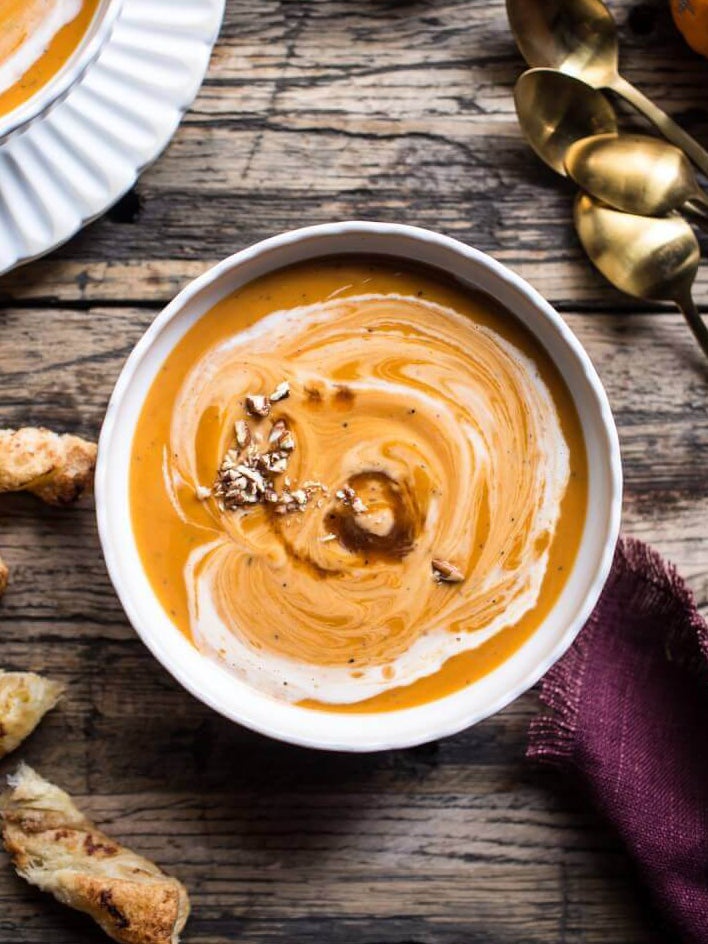 Courtesy of Half Baked Harvest

Maple syrup has so much more going for it than just its sugariness. Sure, you likely most often use the liquid gold to top your pancakes, but according to the experts, it might just be better suited to accentuating your favorite savory foods instead. “Good-quality maple syrup tends to have such complexity that the sweetness is not even the first note I associate with it,” says Jeremiah Stone, cochef and co-owner of Contra. He and other chefs prefer using it in roasted vegetables, creamy soups, and brown liquor cocktails—dishes where its earthy flavor truly has a chance to shine.

But before you start cooking with the maple syrup that you purchased, you’ll need to taste it, because they all have a slightly different flavor, says Laura Sorkin, founder of Runamok Maple. “Some days the syrup is very buttery and has notes of honey,” she explains, “Other days it might be more acidic and have flavors like apple and caramel in it.” The temperature and moisture levels that it’s stored in, as well as the snow cover on the ground when it’s harvested, all have an effect on how it will taste—so take a tip from Mary Poppins and have a spoonful of the sweet stuff to be sure you know what you’re getting. Then use these six expert tips to put it to work and enjoy a little bit of fall flavor every day.

Add It to Pickling Liquid

One of Stone’s favorite ways to use maple syrup is to swap it in for the sugar that’s typically used in pickling liquid. It won’t make your pickles any sweeter than they would be in the first place (because most pickling liquids only have a tablespoon of sugar), but it will lend whatever you’re pickling a nutty flavor that it wouldn’t have otherwise. Be adventurous and stray from the usual cucumber pickle and experiment with things that are in season right now, like apples and pears, which will have an excellent, crunchy texture when preserved in vinegar.

Pair It With Umami Flavors

Sorkin loves to swap maple syrup in for the sugar that’s usually in a lot of Chinese, Japanese, and Thai sauces, because she finds that its rich flavor pairs especially well with soy sauce and miso paste. “Just mix maple syrup with soy sauce and some rice vinegar and you have an instant sauce for stir-frys and roasted vegetables,” she says.

Roast Veggies in It

Maple syrup glazes are also great for roasted vegetables, Sorkin recommends. She likes to combine about a tablespoon of syrup with a tablespoon of miso and a tablespoon of a neutral cooking oil (or sesame oil for a more intense flavor) to make a quick sauce, which she uses to coat root vegetables like turnips. Then she spreads them on a parchment paper–lined sheet pan and places them in the oven to bake at 375 degrees Fahrenheit until they’re tender, about 30 minutes.

She also suggests pairing it with acorn squash, which doesn’t require much prep because of its edible skin. Chop the top off, rub it with olive oil or melted butter, sprinkle it with salt, wrap it in foil, and place in the oven at 400 degrees Fahrenheit. Cook until tender all over, about 30 to 40 minutes. When the squash is almost done, pour a spoonful of maple syrup in the core with a little extra butter and salt, and bake for another 10 minutes.

Drizzle It on Top of Tofu

At Contra, Stone serves fresh tofu that’s slightly warmed and covered with a drizzle of maple syrup, toasted buckwheat, and caviar—it’s nutty, light, and just a little bit sweet. It’s also not hard to re-create with store-bought tofu (minus the caviar). Steer clear of the extra-firm tofu offerings and opt for the softest one you can find. Put it in the oven at a low temperature just long enough for it to warm up, then add a drizzle of your finest maple syrup. The results will not disappoint.

Mix It Into a Drink

When you use maple syrup in a cocktail, Simone Goldberg, head bartender at the Standard in New York City, says it’s best to stick with like-minded spirits to highlight the flavor—namely brown liquors like rum and whiskey. “The rich oak, vanilla, and baking spice flavors pair beautifully with the sweetness of the maple,” she explains. Try swapping it in for the sugar that’s normally in classic cocktails like a whiskey sour or old-fashioned and go from there.

Combine It With Dairy

“Maple syrup is best when combined with any kind of dairy,” Sorkin says. “We have a family friend that likes to stir our cinnamon and vanilla-infused maple syrup into milk for a quick and sweet drink.” But that’s not the only way worth combining it with dairy. Try a savory alternative like this creamy soup, which uses maple to add both sweetness and richness.

Just don’t be surprised if you’ve run out of syrup by the time you host your next brunch—it might be a good idea to stock up.

See more food ideas:  11 Chefs Reveal Their Favorite Fall Food and Beverage Pairings Replace Your Rosé With Rosato Wine This Fall 10 Twists on Guacamole That Will Blow Your Mind