Only rivaled by her collection of 50 vintage vases. 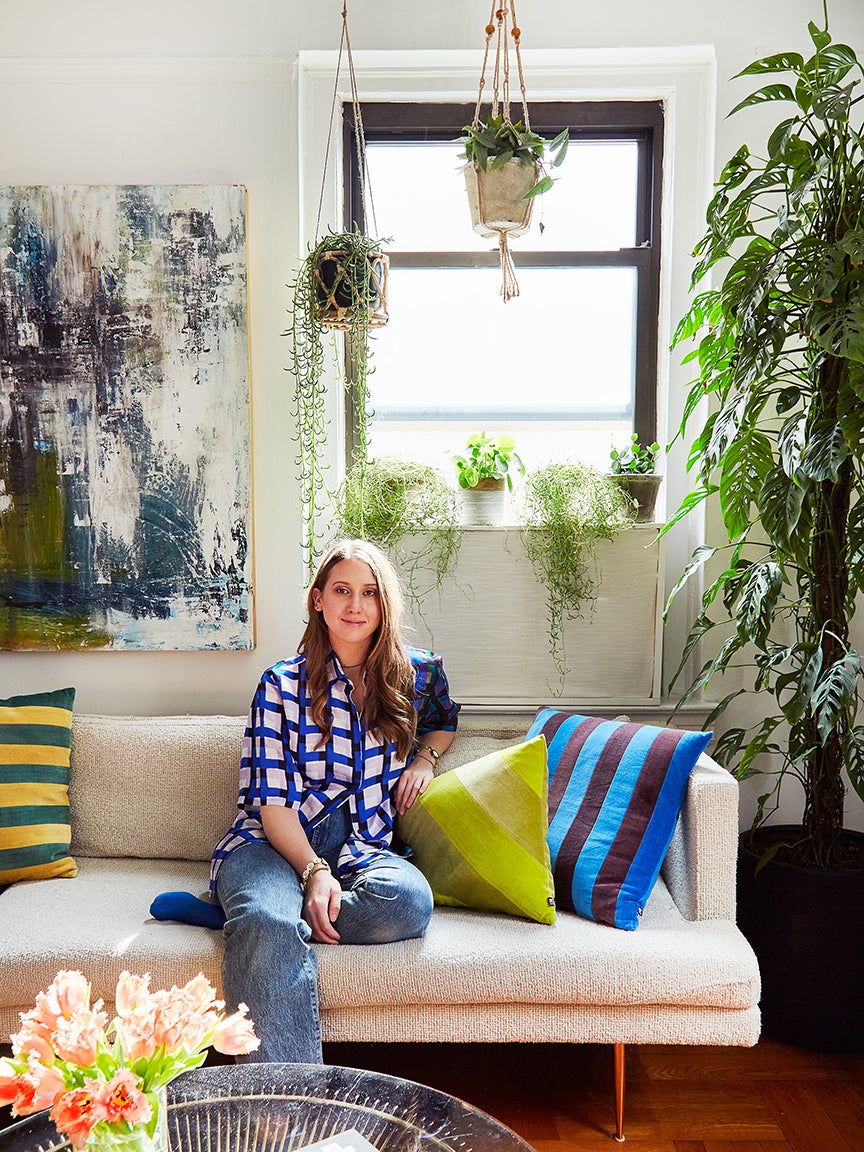 For someone who owns a floral shop that supplies buds to the likes of Gucci, model Gigi Hadid, and Instagram’s Eva Chen, Popup Florist founder Kelsie Hayes sure does have a lot of houseplants—not flowers—lining her apartment in Manhattan’s East Village. There’s a tree in almost every corner, a grouping of trailing succulents on a windowsill, some hanging pothos, and a ceiling-grazing Swiss cheese plant.

But that’s not to say you won’t find blooms adorning select shelves and the kitchen table. “I approach flowers differently at home than I do at work,” says Hayes of her apartment-arranging style. “At Popup we have lots of mixed varieties and bouquets, but at home I love using one type of flower. It’s more about elevating a cool vase.” (Hot tip: It’s also an easy and impressive styling tip for deli flower devotees.)

Hayes’s vast vintage vase collection—she estimates she owns around 50—is just the start of the found objects she and her partner, Justin Fine, chief revenue officer at Wolf & Badger, have in their 1,000-square-foot one-bedroom. When the pair moved in in March 2020, they didn’t rush and fill the apartment with big-box–store finds. “We were able to live in it and feel it out and see what we needed,” says Hayes. “We wanted to collect pieces instead of feeling like we had to run to CB2 and buy something to fit the space.”

Instead they spent an entire year sourcing preloved pieces, like their entryway storage bench and the Milo Baughman étagère in the living room, from local shops and online. Hayes’s advice for scoring furniture from another era? “We always come prepared with measurements,” she says, “but it really comes down to trusting your eye.” It also helps to have friends: Maggie Holladay of Claude Home helped the couple score their Baughman shelves, which hold their record player, art books, and, yes, more vases.

“At home I love using one type of flower. It’s more about elevating a cool vase.”

Some things, though, the duo took with them from their last place, like the green Verner Panton chair where Fine curls up with the paper or his laptop, and the Organic Modernism sofa, which just happened to fit perfectly in their new space while providing a visual break from some of their more vibrant pieces. “I’ll always pick weird colors, but luckily they usually end up working,” admits Hayes.

Where Hayes couldn’t find the just-right furniture, she hacked her way to it. In the airy bedroom, a Noguchi table lamp mingles with an IKEA Tarva bed frame that Hayes painted in a split pea hue. To craft the custom headboard, she removed the slats and replaced them with caning. Covered in navy sheets—“White bedding is so scary to me,” she says—the result is a lush sleeping spot surrounded by ivory walls. For just $100, she created a totally custom bed.

Lighting was another tricky factor, but the couple didn’t let the fact that they live in a rental hold them back. They just bought the fixtures they wanted, hired someone to install them, and—here’s the important part—kept the originals so they could replace them if they ever move out.

When it came to other changes, she outsourced for help. In the living room, an unsightly AC unit resides behind the sofa, so she drew a sketch of what she wanted and enlisted her local hardware store to build a frame to cover it. Once it was finished, she painted it white and stretched linen (aka curtains from Target) along the inside, securing the fabric with a staple gun.

Now, more than a year after moving in and perfecting the mix, the couple says it feels like home. And the plants, well, they’re very happy, too.

All-time favorite rug source: Bazaar du Sud in Marrakech. I visited the company in Morocco, and all our rugs are from there.

The best light fixtures are from: The Old Attic, an Etsy seller based in Slovenia.

Go-to hardware store (the one that built the AC cover!): Saifee Home & Garden.