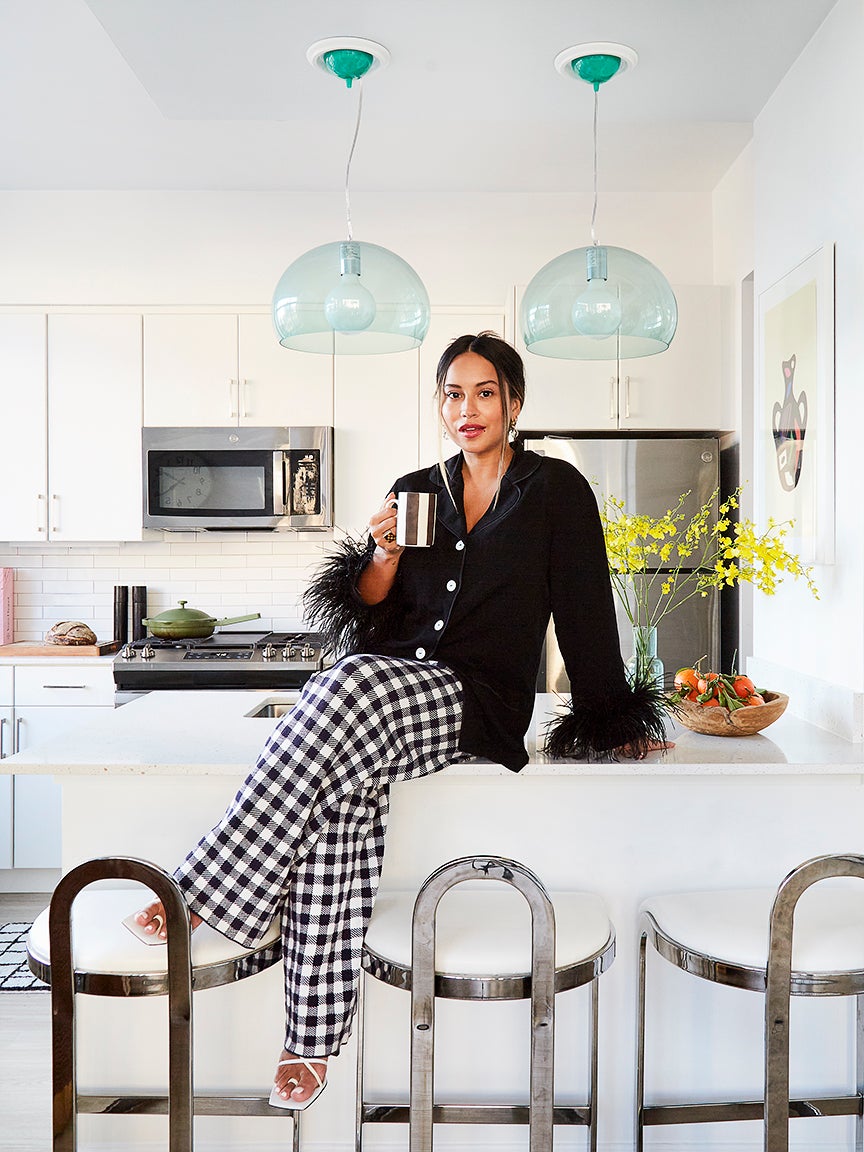 Cyndi Ramirez-Fulton is used to being out and about. “I’m not a homebody,” she says—or at least she wasn’t until the pandemic hit and she and her husband, Adam Fulton, welcomed their first child, Hendrix, last July. At the time the Manhattan-based couple was renting a cramped two-bedroom apartment, all while navigating their businesses through temporary closures (she’s the founder of Chillhouse, a nail salon/spa/café that’s a destination for modern self-care; he’s a founding partner at Den Hospitality, which owns and operates craft cocktail bars, including the Garret). The pause turned out to be a blessing in disguise. They used the time to do some light remodeling at their outposts and reimagine their long-term goals before reopening their doors. Of course, they were also soaking in the precious (and distraction-free) moments with the newest member of their family. “I was really able to hibernate and nest for so long without feeling FOMO,” says Ramirez-Fulton.

In search of a roomier two-bedroom, they recently found themselves returning to the same West Village building they had lived in for six years prior to a brief stint in Brooklyn and their latest apartment. You could call it a homecoming of sorts. “We’ve always gotten mail here,” says Ramirez-Fulton, which gave the couple a reason to casually stop by and ask if there were any units available. It just so happened there were. “It was a weird, long journey to find a place that we feel really good in as a new family,” she notes. The move wasn’t without its sacrifices (for one thing, they had to break their old lease), but it was ultimately the right decision. “We’re living almost our entire adult New York lives in this building, which is kind of sweet,” she adds.

A surprising realization on move-in day: The couple actually needed more stuff. “Which is kind of crazy because we have a lot of things,” says Ramirez-Fulton. Investing in a fresh sofa was a must, mainly because the green velvet couch that was in their last place had bad vibes. “Once a roach crawled on my face when I was on it,” she says. “I’m still traumatized by that experience.” Rather than wait out the eight- to 12-week lead times for a piece from a big-box retailer, the Fultons paid a visit to their favorite home store in Brooklyn, Beam, and picked up a floor model swathed in cozy bouclé fabric.

“People thought I was crazy for getting white, but I have a good couch cleaner,” she points out (her secret is Folex—it’s even gotten red wine out of her faux velvet pouf). The neutral hue allowed her to play up color elsewhere, like with the wavy rainbow Pieces Home rug and the large painting in the living room by their friend Sherwin Associates, whose work also takes pride of place in the bedroom.

The ultramodern Vitra wall organizer that hangs in the entry was on Fulton’s wish list for a long time. “I never would have wanted it before COVID, but it’s the perfect thing to put by the door,” admits Ramirez-Fulton. The little pockets are the ideal size for sunglasses; perfume rollers; mini hand sanitizers; and, of course, masks.

“I was really able to hibernate and nest for so long without feeling FOMO.”

Nearby she turned an empty corner into a music zone for Fulton, formerly the frontman in his high school band. “He actually opened for My Chemical Romance once,” says Ramirez Fulton. A portrait of Jimi Hendrix—a nod to their now 8-month-old son—was a fitting addition to the guitar-dotted nook.

This latest move sparked two new decorating ventures for Ramirez-Fulton: plants and babyproofing. The former was an exciting addition because there was never enough light in any of their previous apartments to properly care for greenery. Now there’s a full-on ficus Audrey tree in the couple’s bedroom. “It gives the space a little bit more of a romantic vibe. It’s very ’70s Italian villa,” she says.

As for the latter, that’s a current work in progress, as Hendrix is only just starting to crawl. Said plant pots will soon have burlap covering the tops so he can’t dig his fingers into the dirt, while the edges of their glass coffee table and other pointy corners have already been taken care of. The ribbed bar cabinet is naturally Hendrix-proof—in fact “he loves going over there in his walker and feeling the texture,” shares Ramirez-Fulton.

Lighting was an easy way to make the big, blank box feel less like a rental and more like a long-term home. The couple mounted bistro-style plug-in globe pendant lights in the living room and bedroom, as well as a pair of glass domes over the kitchen peninsula where there were once recessed cans. “It’s such a game changer,” Ramirez-Fulton says of the simple swap.

Lamps, though, are her true passion. The lightweight fixture in Hendrix’s safari-meets-mid-century–inspired nursery ranks high on her greatest hits list. “It gives off a really warm, soft glow when he’s going to sleep,” she says. Ramirez-Fulton isn’t one to normally display wedding photos, but she made an exception for her son’s space, hanging a framed illustration of the couple behind the rocker. “I think it’s important to have our faces in his room so he can see Mommy and Daddy,” she says (there’s also a photo of them over his crib).

advertisement
“I think it’s important to have our faces in his room so he can see Mommy and Daddy.”

In addition to plant care, Ramirez-Fulton is also learning the ropes of purging. “I have so much stuff,” she reiterates. She’s adopted a unique system for consolidating and concealing her ever-growing amalgamation of beauty products: two round Kartell storage units. “Basically I’m trying to not crowd up this room,” she says with a laugh, and the same goes for the couple’s closet. “Adam is very tidy and I’m a little messier, so we’re making it work.”

That said, she did just get an exciting shipment that’s been added to the mix: Chillhouse’s first-ever formulated products, Have a Chill Day and Have a Chill Night face and body oil collection—a launch that’s been in the works for years. “It’s like a spa experience in a bottle,” explains Ramirez-Fulton. The daytime skin care is designed to illuminate, hydrate, and bring out your inner radiance, while the nighttime version will give you a silky, luxurious feeling before you hop into bed.

With this latest drop, a fresh home base, and a 1-year birthday celebration on the horizon, Ramirez-Fulton is feeling optimistic about the rest of 2021. “I think we’re going to see a resurrection in New York,” she says. Her newfound inner homebody won’t keep her from the city just yet.

Where I buy plants and gardening supplies: I’m a big fan of Plants & Spaces. It does a beautiful job curating unique plants. A couple of florist honorable mentions include Wife NYC, Popup Florist, Oat Cinnamon, and East Olivia.

Objects in my home that get the most use: The double twisted steel candleholders from Monochrome Haus and our Berkey water filter.

Biggest splurge: I just spent $150 on a chic sweeper set, which feels insane, but at the same time it’s out in the kitchen all the time, so I can clean up my husband’s cooking mess. It was worth it!

Biggest save: Our Chillhouse Palo Santo & Chill candles (because I give myself a very generous employee discount). It’s the best-smelling candle in the world—you have my word.

Pattern in my home that is so me: Our carpet from Pieces. Wavy, baby!