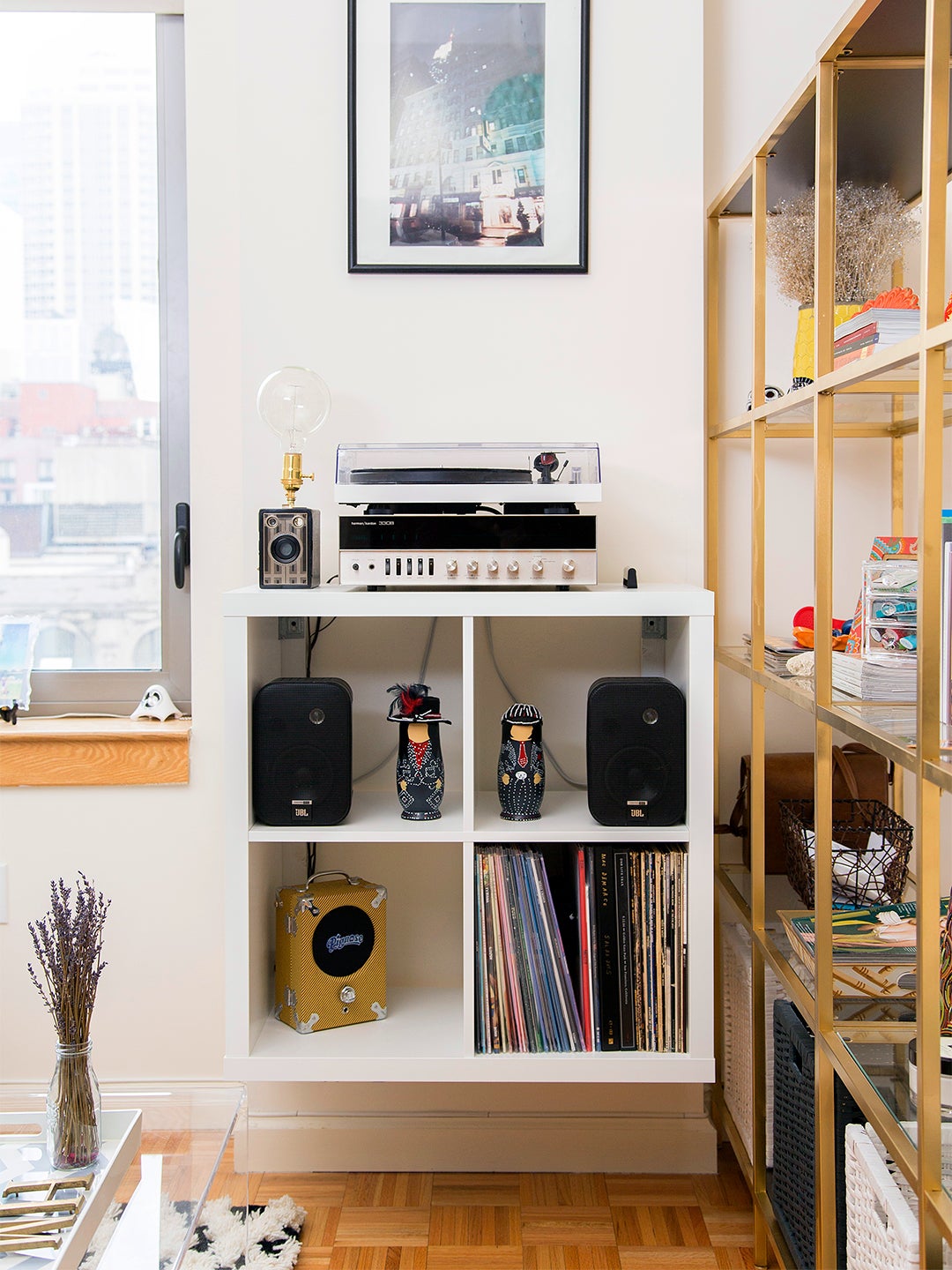 Dating, blood donating, and bookshelf styling: Everyone has a type. Whether you’re an ardent cover color-coder or a master of the vignette, styling out a bookshelf is one of the quickest ways to make a space feel totally your own. So what about taking it a step further and customizing the shelf itself? IKEA’s Kallax shelving unit is about as blank slate as it gets. Clean lined, easy to construct, and available in only a handful of neutral shades (once you’re on the lookout, you’ll spot the white flat-pack unit everywhere), it offers the perfect canvas for first-time DIYers—mount it to make an elevated record display in a matter of minutes or add a lick of paint to create a splashy backdrop for cactus and curios. Go on and get creative! This is one project where it helps to think outside the box.

“I was living in a studio apartment in midtown Manhattan with my boyfriend (now husband) and wanted to create a fun, quirky space that showcased each of our styles cohesively,” says interior designer Molly Torres Portnof. Since they’re both huge audiophiles—her husband runs a record label—Portnof wall-mounted the Kallax to display his prized record setup. Here, it checks the boxes of both form and function. The designer recommends bringing the eye up as much as possible, especially in smaller spaces, and this floating unit does just that. Pro tip: Be sure to use wall anchors when mounting the unit, especially if your wall is drywall or plaster.

Give It a Facelift

What’s the magic of a good IKEA hack? The sweet spot lies in the overlap of sustainability and affordability. Case in point: this DIY from fashion and home blog Black With Navy. “I’ve had this shelf since my university days, and it’s served many functions in many spaces over the years,” says Lauren Bleackley. “I was growing increasingly weary of [its original] espresso color, as it began sticking out like a sore thumb among my other decor.” Bleackley opted for a refresh with $19 worth of white paint, plus the addition of drawer and door inserts and tapered wood legs. She transformed the open shelving unit into closed storage with fluted texture door fronts, so her new-and-improved Kallax now serves as a sideboard, perfect for a dining room or entry space.

There are endless ways to zhuzh up a bland bookshelf, and the more-than-usual time you’re spending indoors presents the rainy-day opportunity you’ve been waiting for. Where to start? Take a cue from French architect and designer Camille Hermand, who painted select sections of a client’s custom built-in a bright and peppy yellow—arguably an even stronger statement than if she had painted the whole unit. “The colorful sections were selected according to the objects and books the client wanted to put forward,” she explains. Pick one splashy hue like Hermand did, or think about a two- or three-color palette that ties back to your space. (Look to a piece of art, rug, or your throw pillows for inspiration.) The best part: She tackled this project start to finish in one weekend. Here’s how.

Get a Leg Up

Unable to find a record shelf she loved on the market, Romina Halewat opted to make one herself. A quick Pinterest surf and Google search later, she decided to outfit her Kallax unit as a “self-made record shelf, the very first DIY project in [the] apartment.” Working with a single-shelf, four-cubby unit, Halewat added sleek cabinet doors and ultra-thin tapered legs to elevate the Kallax’s basic building blocks with a mid-century modern vibe. In quintessential Scandi style, the functional media console houses all her vinyls in one easy-on-the-eyes piece.

Think Outside the Box

In the ultimate reimagination of the Kallax, pro IKEA hacker Linda Kullenberg transformed the square unit into a sky’s-the-limit play station for her three kids, inspired by their obsession with household appliances. With designed-to-fit vinyls and some basic rod-and-hooks hardware, Kullenberg fashioned a play kitchen on the front and a laundry room setup on the back. “The lights run on battery so there are no cords or anything in the way,” she explains. One lesson she learned the hard way: Measure and think small scale for small kids. “My first try was a total failure, since I used the top of the shelf as the kitchen counter and my daughter couldn’t reach it!” she recalls. The mid-level shelf gives room to grow—it’s more easily accessible for children, and then you can add wheels or table legs when your kiddos start needing a little extra height.