Permission to wallpaper the ceiling. 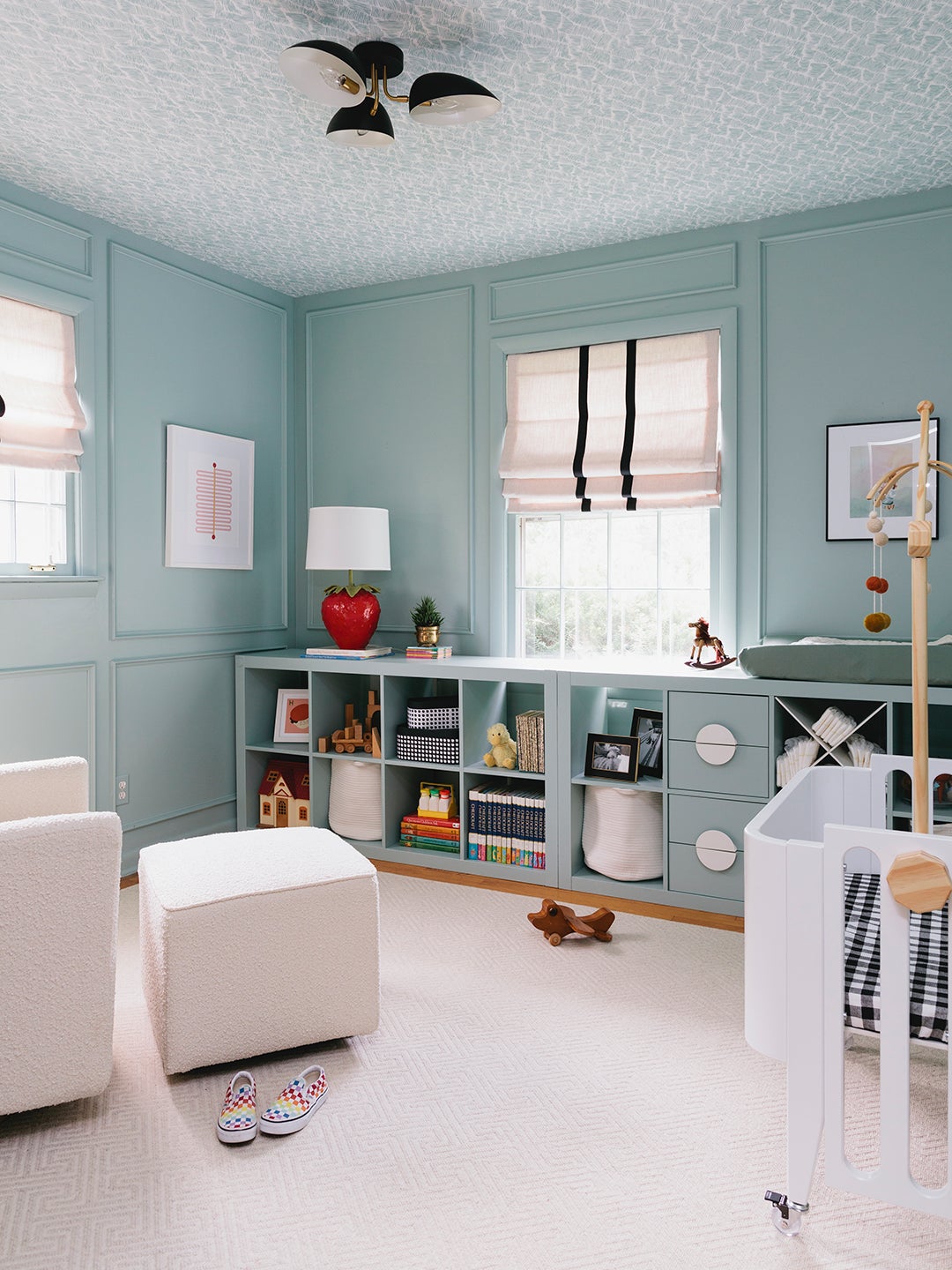 Katherine Thewlis has a hot take on nurseries: She doesn’t believe in them. And as the founder of interior design studio Hausmatter and a mom of one with another baby on the way, she knows what she’s talking about. “When I first had my daughter, I totally had a nursery. Didn’t end up using it. A full-blown nursery with a crib and everything, and we only used it to store clothes,” she reveals (she always kept the newborn close by in her bedroom). This time around, Thewlis is rebelling against the idea that you need to have an entire baby-dedicated space. Instead she designed what she has dubbed an “un-nursery” for the One Room Challenge.

While Thewlis knows this room will continually evolve, it currently functions as a playroom, storage area, and extra spot for the baby to take afternoon naps. The un-nursery is painted from floor to ceiling to furniture in a robin’s-egg blue hue, which Thewlis chose for its adaptability. “I would consider it a neutral because you can throw any color at it. Sometimes I see nurseries that are very curated in terms of palette, and you feel like you can’t bring anything in that doesn’t coordinate. Views by Clare is a backdrop color that can support a lot of other shades.”

Two IKEA bookshelves, painted the same blue, fade into the walls, giving the storage a luxe, built-in look. Adding a changing pad on top and a dedicated cubby for diapers right below nixed the need for a changing table, which Thewlis thinks is a bit of an antiquated concept anyway. She shares, “I like the idea of using dressers or bookshelves because then you’re not committing to baby furniture.”

In a few of the nooks, Thewlis installed drawer inserts (also from IKEA) by first filling in the existing knob holes, drilling new ones to line up the half-circle handles, and painting the fronts in—what else?—Views. Wooden rosettes glued to the corners give the furniture a sweet touch that makes it look even more custom. Baskets hide the remainder of the toy clutter while ensuring Thewlis’s daughter can easily pull them out for play.

Thewlis also admits breaking a couple more interior design rules when it came to the ceiling treatment, but for good reason. “Babies spend so much time on their backs, whether they’re playing or on the changing table, so it’s a fun room to do something extra overhead,” she advises. She landed on a color-coordinating wallpaper with a graphic akin to soft, rolling hills. While Thewlis wouldn’t change a thing, she doesn’t recommend this path if you’re trying to make your walls seem taller than they are. “Essentially I was adding texture to the ceiling—I did this to the walls using the picture frame molding, too—and your eye is going to notice where the wall ends and the ceiling begins,” she explains. To trick the eye into perceiving a loftier space, she suggests painting the ceiling the same color as your walls.

The other rule Thewlis happily broke involves the floor. “Typically you want to have 12 inches between the edge of your rug and your wall,” she explains. “But I took it even further because it just makes the floor feel more expansive.” Plus the ivory style’s geometric pattern offers subtle dimension without competing with the pattern directly above.

While the un-nursery is only the second children’s space she has designed, it probably won’t be her last. “Kids’ rooms are so much fun!” says Thewlis. “They’re a place where you can design with reckless abandon.”