Lessons from a first-time parent. 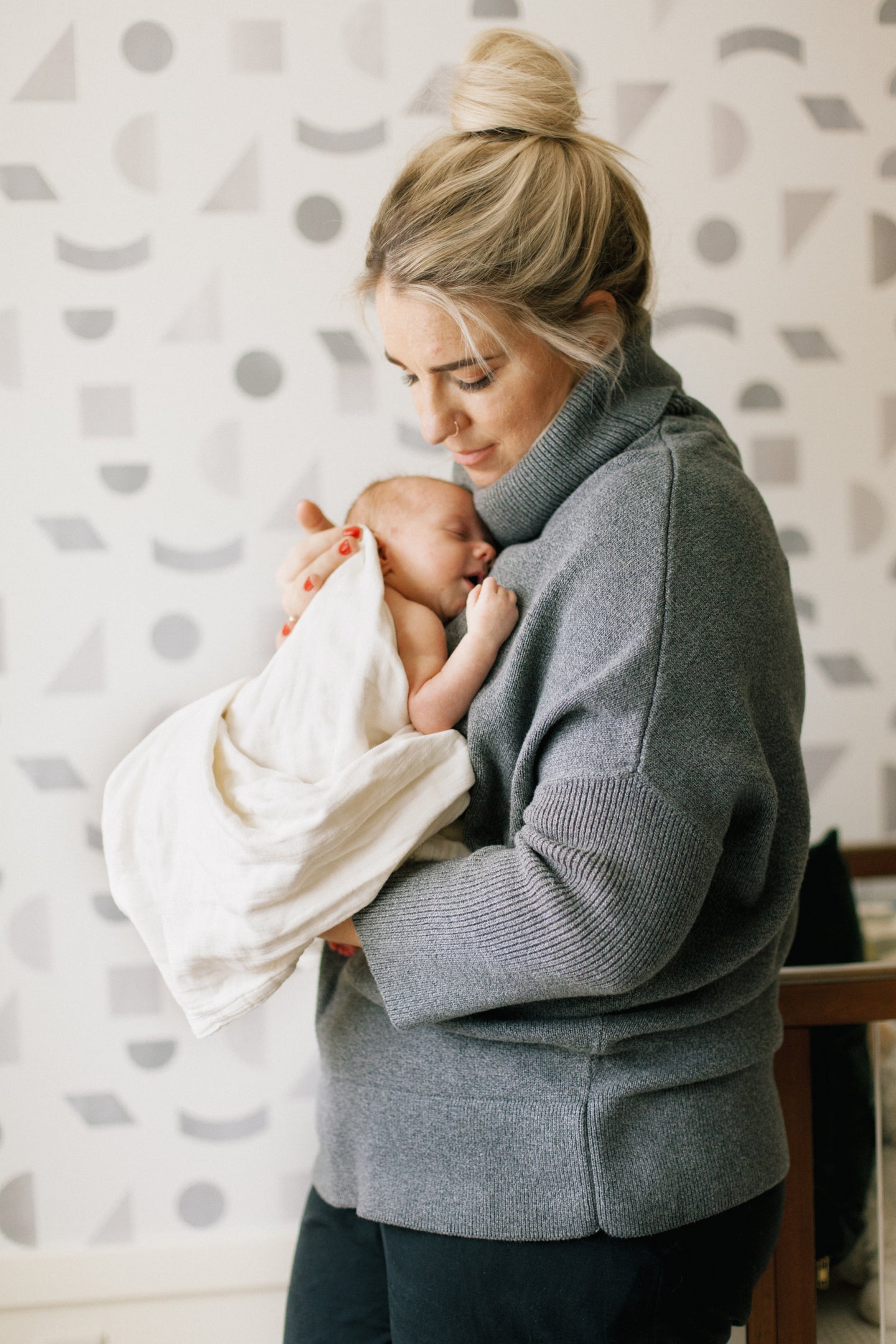 Jenna Kutcher has accrued a long list of titles over the years—photographer, entrepreneur, podcaster—but none seem to compare to the role she jumped into two months ago: mother. If you’re one of Kutcher’s 700k-plus Instagram followers, you’re already in awe of her candidly open take on the search for self-love and, more recently, the challenges of starting a family. Suffice it to say, when the time came to design a nursery for her little one, Kutcher knew that the space would be so much more than just another pretty room.

“As someone who struggled to start her family, finally holding my girl in her room has become one of those ‘pinch-me’ moments,” shares Kutcher.

When Kutcher and her husband, Drew, first moved into their new home in Minnesota, the couple was hoping for a fresh start. After two miscarriages and three years of patiently awaiting parenthood, Kutcher found out they were expecting the day after they moved in. Their daughter, Conley, arrived in December.

“I wasn’t sure how I would feel in my skin… but I’ve never been more proud of this body that I hid for years.”
photography by Jenna Kutcher Photography by IMM LIVING

“I had dreamt about nurseries for years only to be crushed with loss, so it took us a long time to really believe that it was finally happening for us,” she recalls. “I’ve learned a lot about seasons of waiting and how sometimes they’re just as important as what you were waiting for. We are so fortunate that we get to do it together, and I’ll be honest, Drew rocks the dad life.”

Designing a nursery would be the first of many milestones to come. Ahead, Kutcher gets real about waiting, parenting, and loving her body—no ifs, ands, buts, or “bounce backs” about it.

On dreaming up a nursery for their winter baby…

Kutcher exemplifies the kind of fearlessness we all aspire to possess, so it’s no surprise that the nursery she and designer Naomi Alon Coe of Little Crown Interiors created would be fit for a child with the same sense of assurance—be it a little girl or boy.

“We were always set on keeping the gender of our baby a surprise, so I envisioned a neutral spot that was soft but cozy,” explains Kutcher.

Coe, who primarily focuses on nurseries and children’s rooms, took the lead—drawing on the couple’s established minimalistic aesthetic for inspiration. “[The] nursery pulls some parallels to the design of our condo, mixing rich woods with fun blues and pops of green,” says Kutcher. “We are also huge minimalists on the island (mostly because our space is small), so I wanted to leave some empty space and keep the minimal design rocking.”

The pair brought in cozy textures and plenty of plants (both real and faux) to combat the chilly Minnesota temperatures. An extra dose of warmth seemed to suit a winter baby.

“I’ve learned a lot about seasons of waiting and how sometimes they’re just as important as what you were waiting for.”
photography by angela rose gonzalez Photography by food52

On honoring her body…

“My journey of self-love has been deeply intertwined with our fertility,” says Kutcher.

Living life in her own skin, by her own rules, it’s easy to think that Kutcher would welcome and accept her body’s changes—morning sickness, heartburn, stretch marks, swollen ankles, anxiety, and all—with open arms. But if she’s going to keep it real, she’ll tell you that pregnancy is hard.

“Along with my changed body, my mind has also changed,” she continues. “I struggled a lot in early pregnancy being anxious about another loss and having terrible morning sickness that lasted for many weeks, but as the pregnancy progressed, I relied on gratitude to accept the changes that were reflecting the miracle that was happening for us.”

On space as a source of escape…

What does Kutcher love most about the room now that she and Conley get to live in the space together? “Sitting in the glider and singing to my girl,” she shares.

While Conley is still sleeping in the master bedroom, Kutcher will often escape to the nursery to feed her or just relax. “It’s become one of the best places for us to spend time. The room gets amazing light during the day and feels so peaceful at night,” she continues.

A wallpapered accent wall—an inexpensive DIY project the couple tackled together on a Sunday afternoon—helps set the scene for zen moments.

Flying with a 2-month-old seems like a recipe for disaster, but because Kutcher and her husband split their time between Minnesota and Hawaii (talk about having the best of both worlds), travel is inevitable. Rightfully nervous for their first flight as a threesome—it didn’t help that they were departing during a winter storm or that their flights were delayed for three days—the trip to Maui was an unexpected breeze.

“With teamwork and the ability to roll with the punches, we made it happen, and it went great,” she admits. Their first travel lesson learned? Pack earlier than you normally would.

“We tried to pack as light as we could and rented a bassinet on the island, so overall, it was much easier than we anticipated,” she adds.

On breaking the “bounce back” stigma…

Like many women, Kutcher thought that having a baby would “ruin” her body. It didn’t help that her inbox was inundated with messages about diet plans and pills.

“I wasn’t sure how I would feel in my skin, didn’t know if I’d want to hide the loose skin, extra pounds, stretch marks or my boobs that are two different sizes, but I’ve never been more proud of this body that I hid for years,” she says.

Her body as a mother was new and different—and all the more powerful for it. “I’m wearing it all with pride because I want to recognize I’m a walking miracle who is strong and resilient and scarred and flawed but proud and beautiful,” Kutcher explains. “I’m not worried about getting my ‘body back’ because frankly, I never lost it.”

A Cool, Contemporary Nursery that’s Not Afraid of a Little Neon

9 Nursery Essentials That Will Grow With Them