This Designer’s Eclectic Home Proves Black, White, and Brass Will Never Go Out of Style 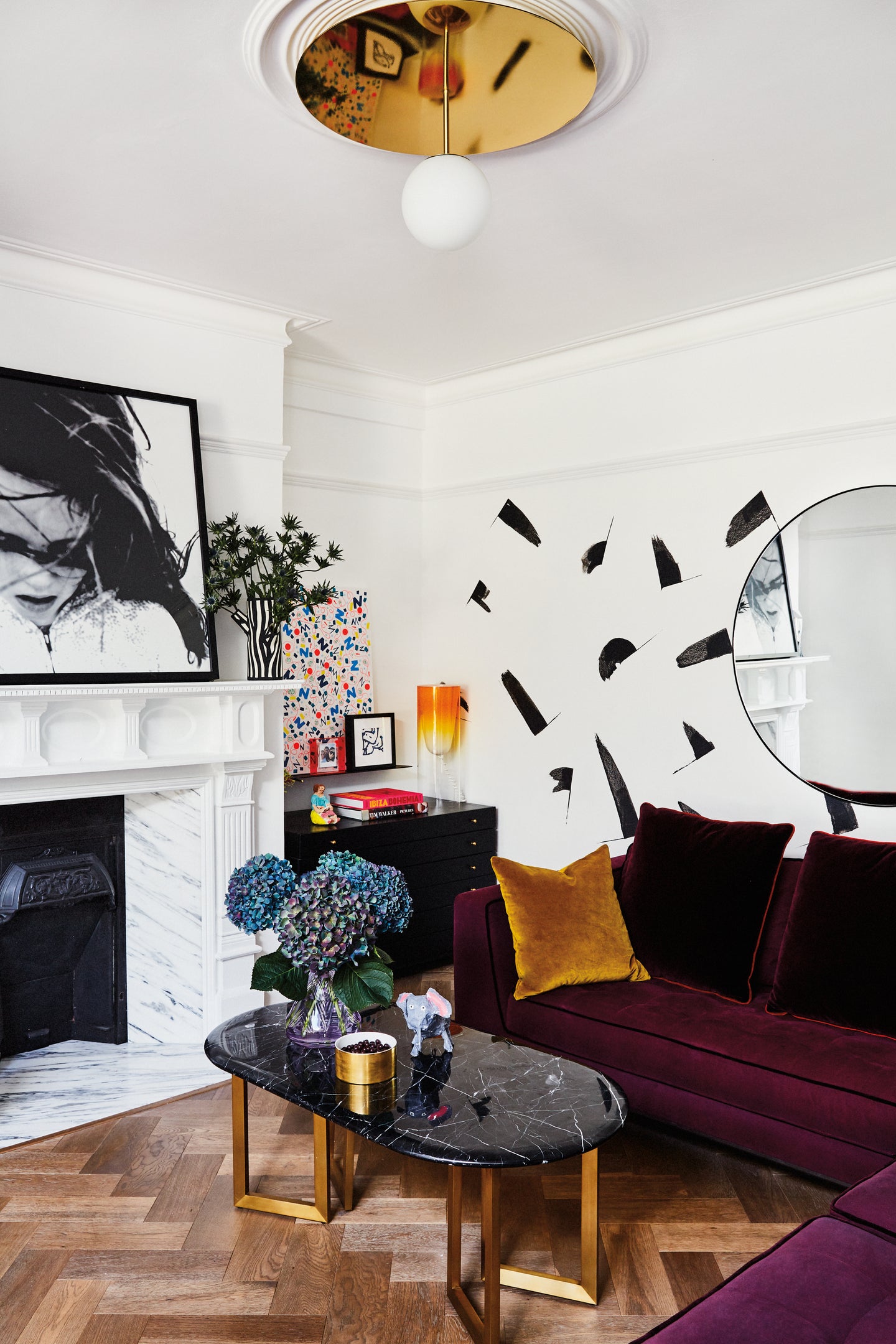 This story originally appeared in the Spring 2019 issue of Domino, titled “A Fine Balance.” Subscribe to be the first to receive each issue!

Jo Sampson began the summer of 2017 in good spirits. Her debut collection for Drexel Heritage Furniture launched two months earlier; a line of bespoke photography and prints created in collaboration with Wendover Art Group had just been released; and she was awaiting a shipment of pieces for a scheduled photo shoot at her Victorian home in London. But as June drew to a close, the unthinkable happened: At just 44 years old, the British designer and mother of two daughters was diagnosed with what would eventually be classified as a highly aggressive form of breast cancer.

“It was quite surreal,” Sampson says, looking back on it. “Because the products had left the port, I had to go through with receiving a 40-foot shipping container, clearing customs, and then organizing the delivery to my house. Things happen, and you can sit back and wallow in it or move on,” she adds.

In fact, she approaches every aspect of her life with such determined positivity. Though six months of chemotherapy and radiation slowed her down, they didn’t sideline her. “As a creative person, you still want to create—you need that mental stimulation,” she says. “My clients were great because they let me do what I could when I could. Some days I couldn’t move and just stayed in bed, but my mind was always going.”

Another source of reassurance was her home itself. “The treatment was brutal and debilitating,” recalls Sampson. “The irony was that my house was in the best shape it had ever been in, and it became my cocoon.” In the heart of London’s Dulwich Village—a leafy enclave with historic residences, rolling green spaces, and a world-class portrait gallery whose walls drip with Rembrandts—the stately Victorian maintains many of its original details, from fireplaces with glazed-tile surrounds to plaster cornices and ceiling roses. The vibe, however, is clean-lined and contemporary, in keeping with Sampson’s personal aesthetic. “It had real character,” she says of purchasing the property six years ago. “We moved in when it was quite a wreck, but I wanted to retain and respect its history while making it more comfortable.”

For Sampson, that meant customizing the house into an atelier-like retreat that is conducive to both work and play. She established a much larger family room by extending the back of the structure—which included the kitchen and the living room—nearly 20 feet, and she built a freestanding studio for meetings and brainstorming sessions in the backyard. “I drop the girls off at school every morning and pick them up every afternoon, and don’t have to waste time getting to and from an office in downtown London,” Sampson explains. “A big realization I had after being ill was that you have to make work work for you.”

Of course, having her work life and home life collide on a daily basis presents its own challenges. “I’m exposed to so much inspiration all the time—it can be very dangerous,” she jokes of the difficulty she has keeping her design impulses at bay. But she overcomes it by sticking to a simple black-and-white palette, then blending in more nuanced shades of each, as well as muted accent colors, for an eclectic balance that can easily be changed with small tweaks and updates. In the living room, a plum velvet sofa plays off brass details, a richly veined marble fireplace, and Sampson’s graphic black hand-painted brushstrokes against a crisp white wall. “As a designer, I’m very classically minded,” says Sampson. “I don’t like a lot of saturation; I prefer much more tone-on-tone color.”

That’s also true of the eat-in kitchen, where blush-hued chairs and herringbone wood floors add warmth to white cabinetry, a custom brass stove hood, and drawer pulls that resemble lightning bolts. “I wanted the units to look like furniture and create an unexpected focal point,” she says, noting that the patina of the metal will only add interest over time.

That kind of delicate ornamentation is a theme throughout Sampson’s home and work. Much of the artwork on display is comprised of her own sketches, and many of the pieces are prototypes from Sampson’s line for Drexel Heritage Furniture, which showcase her less predictable approach to design. The bar cart in the living room, for example, is less than typical. While most are crafted to highlight bottles of liquor, Sampson’s is intended to hide those bulky, often unattractive vessels in concealed side compartments and instead showcase her cache of cut-crystal goblets and decanters, many of which are from her collection for Waterford.

“Your home has to be your sanctuary,” she says of both the creative solace and personal comfort she finds in a house that shows her hand at every turn. In her daughter Grace’s room, a jungle-themed wallpaper by Cole & Son provides endless hours of entertainment. “We lie in bed counting how many monkeys we can find camouflaged among the greenery,” Sampson notes, relishing the quiet moments with her children but also those spent cultivating curiosity and wonder. “I want them to be inspired every day.”

This 700-Square-Foot Apartment Is Home to Over 70 Plants