quick, delicious, and healthy meals are lifesavers (and being hangry isn’t fun for anyone). 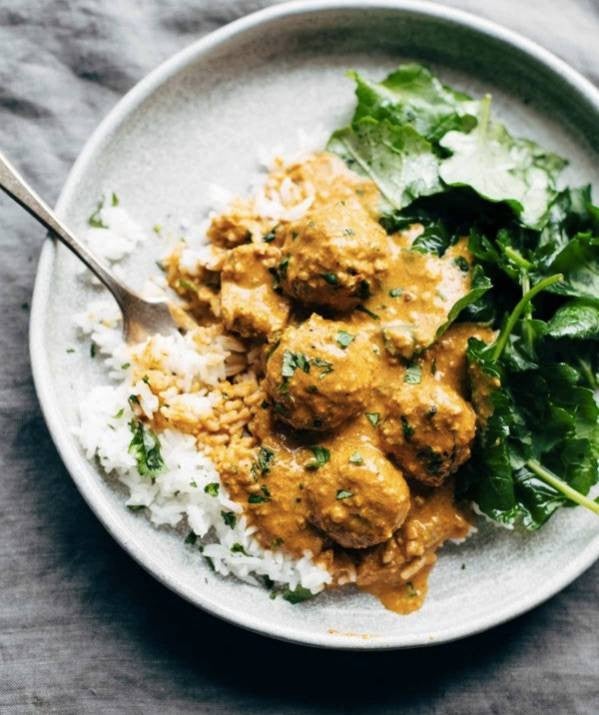 We start off with the best intentions every week: cook a bunch of food on Sunday so there are leftovers, meal plan down to the minute, buy fresh produce European-style on a daily basis. But inevitably, life happens, and we find ourselves scrounging around the kitchen and opening up the fridge repeatedly in hopes that a complete meal has magically conjured itself while we were at work. We can’t do anything about a fridge that stubbornly refuses to learn how to cook, but we do have 18 options for delicious dinners that come together in less than thirty minutes yet taste like a million bucks. Just because it’s a weeknight doesn’t mean you have to resign yourself to Cup-o-Noodles or spending a ton on take-out; craft these tasty dinners while listening to your favorite podcast or catching up with your favorite people. Dinner will be on the table before you know it.

one pot spicy thai noodles Hot, quick, and spicy; just the type of dish we want to throw together before settling back to watch our favorite show. Add in your favorite protein for a more filling meal and consider steaming some additional veggies to stretch the meal into leftovers.

gnocchi with mushrooms and feta This gnocchi looks like it would be on the menu at a fancy Italian restaurant, yet it’s accessible enough for anyone to try at home, especially if you use store bought gnocchi. Gnocchi’s delicate flavor and texture can get overwhelmed by thick tomato sauce, so this mushroom wine sauce is a welcome alternative.

polenta pizza Gluten-free pizzas are typically time intensive, expensive, or disappointing (or all three), but we love this “pizza”, which uses polenta as a base. Cooking the polenta first on the stove and then transferring it to the oven in a cast iron skillet gives it a nice crunch and begs to be topped with your favorite sauce, cheeses, and veggies or proteins. Homemade pizza at its most versatile!

cacio e pepe The list of what you need to make cacio e pepe is short: spaghetti, freshly ground pepper, and freshly grated Pecorino Romano, so buy the highest quality ingredients possible. The result is an unbelievably decadent and satisfying dinner that will make you feel like a kitchen rockstar because a) it tastes awesome and b) it seriously only took three ingredients!

greek quesadilla There’s no shame in craving the simple deliciousness of a cheese quesadilla. This version takes a comforting detour into Greece with the addition of kalamata olives, sundried tomatoes, spinach, crumbled feta, and fresh dill. Dip it into homemade and creamy tzatziki sauce for a satisfying dinner that comes together in less than twenty minutes.

spicy chickpea moroccan couscous A sumptuous vegan salad with spiced (and spicy) chickpeas, homemade tahini sauce, and quick cooking couscous. Even if you are nowhere near a souk, you’ll kinda feel like it as you chomp on this healthy dinner.

cauliflower “meatballs” Now these are some meatballs that every veggie lover can get behind. Comprised mostly of cauliflower, brown rice or quinoa, and eggs, they’ll go great topped with a variety of sauces and served alongside roasted veggies or even on top of salad greens) This recipe makes a ton, so you could freeze the extras or simply cut down the number you make (as well as slashing the prep time).

one skillet mexican rice casserole Lots of flavor goes into this rice casserole, none at the expense of time. Corn, beans, rice, and salsa are added to a sofrito base. After sprinkling cheese on top, the casserole gets a quick broil before it’s ready to serve piping hot and bubbling to the hungry masses.

one pan roasted lemon pepper salmon with asparagus One pan: that’s all you need for cooking this dreamy salmon and cheese sprinkled asparagus dish. We love that there’s barely any clean up almost as much as we love the fresh, flavorful, and healthy option. While the asparagus and salmon are cooking, cook up a little quinoa or heat up some leftover rice if you want a heartier dinner.

kimchi and vegetable soup This soup tastes like it would take much longer to prepare, so it can be our little secret that it’s a perfect meal to make at the end of a long day. Kimchi is the flavoring star of this soup; it’s also great for helping with digestion! This is not a fussy soup-, so add a little of this and a little of that in the form of some fresh, crisp veggies, and you’ll be good to go.

baked tilapia veracruz Here’s another one skillet wonder, because there’s nothing sadder than facing a whole sink full of pots and pans after dinner. Inspired by both Mexican and Mediterranean flavors, the spoonable sauce and the flaky fish cook quickly and have a refreshing, piquant taste that will revive you after your daily slog.

zucchini fettucine with white bean vegan alfredo sauce Fettuccine alfredo is often on the once-a-year list due to its extreme creamy decadence. This version, however, can be made on a more frequent basis. It’s quick  to pull together and vegan to boot, using cannellini beans and almond milk for that luscious texture (sans the heavy amounts of butter, cream, and cheese). Swapping spiralized zucchini zoodles instead of noodles lightens up the dish as well, but it’s still hearty and comforting fare.

black bean, tomatillo, and corn soup You don’t need to simmer a soup all day to have a flavor-packed, warming option. Black beans, tomatillos, corn, and tomato are powerful enough to impart big taste after only minutes of cooking. Cool your moth down by topping the soup with sour cream and avocado slices. We are almost excited about chillier evenings with a soup like this to sip on.

honey garlic shrimp This dish proves how a few ingredients (honey, soy sauce, and garlic) can totally transform plain shrimp into a dynamic dinner. While the shrimp is marinating, steam some veggies, boil up some rice noodles or reheat some rice. Dinner will be done before you know it…and will disappear just as quickly!

eggs baked in portobello mushrooms Eggs have been baked in avocados, in potatoes, and in toast, so we’re pretty psyched to try using a portobello mushroom as the last edible vessel for eggy goodness. Paleo-friendly, the dish beautifully combines protein with a famously “meaty” veggie. We’d love it topping a big green salad with a simple vinaigrette.

garlic green pea soup This vibrantly colored soup is surprisingly easy and is made mostly from ingredients you commonly find in your cabinet plus a bag of frozen peas. Cashew nuts give this soup a rich mouthfeel and plenty of flavor. Light yet well-spiced, this soup would be awesome served alongside toasted baguette pieces.

peanut sauce fried rice Fried rice topped with a creamy, coconut-y peanut sauce isn’t the norm, but it’s extremely delicious (and isn’t that all that matters when your stomach is growling?). As is, the recipe is vegan and made with tofu, but sub in your protein of choice and clean out your fridge by using all the veggies you have.