It was very much not a weekend project. 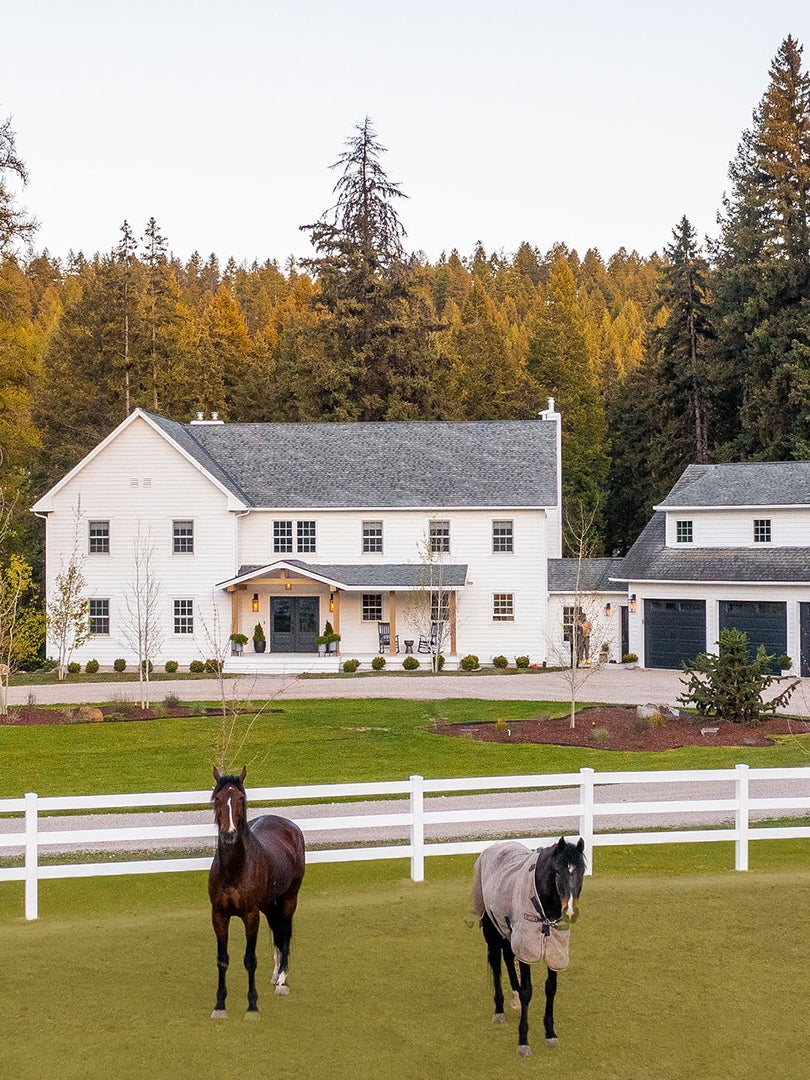 Celebrity wardrobe stylist Samantha Burkhart might dress colorful people for a living—Billie Eilish, Katy Perry, and Mark Ronson are just a few of her clients—but don’t go thinking her house is swathed in neon and leather. “It’s never my intention to completely reinvent somebody much in the same way that it’s never my intention to reinvent a house,” says Samantha. When she and her husband, Jason, along with their two daughters, Eleanor (8) and Lake (4), moved to a five-bedroom, 32-acre ranch in Whitefish, Montana, the longtime Angelenos decided to let its rustic bones lead the direction of the renovation.

Despite the eight-stall horse barn located on the property, this wasn’t your typical farmhouse. The home itself had been built in 2004 but cheaply and confusingly done in a New England Colonial style—one of the reasons Samantha guesses it sat on the market for two years. The windows were missing trim, there wasn’t any hardware on the kitchen or bathroom vanity cabinets, and the floors were an orangey oak color. Luckily the couple, who have been developing and renovating homes in L.A. for the past seven or so years, were up for a challenging remodel (Jason not only works in the music business—he’s a licensed contractor in California). “We’ve bought a lot of ugly houses,” says Samantha with a laugh. Their goal was to make the space feel more like a working farmhouse—something she knows a lot about as an equestrian and having grown up visiting her grandmother in nearby Bigfork as a child—while also making it family-friendly.

The DIYs That Weren’t Worth the Trouble

Sprucing up the exterior was primarily a matter of paint (that is, after building out an airy front porch to help add dimension to the architecture and make it feel less churchlike). Samantha decided to take on the job of turning the home white herself. Easy, right? “It involved two weeks in November of me spraying it with ice-cold water while standing on a giant lift,” she recalls. “I later found out you can hire a person to do it in 24 hours with a sander.”

Refinishing the floors was another project that seemed doable in theory but turned out to be a pain. The couple stripped about 70 percent of the rooms themselves before they caved and hired a pro because the machine was too much to handle. Tap it the wrong way and it might take a huge chunk out of the boards. “There’s a finesse to it,” Jason notes. Or as Samantha puts it: “It’s not a cute little hobby for a Saturday afternoon.”

Initially, when you entered the home, you were greeted by a closed-off staircase with “very square steps” and a cherrywood banister. “It was one of the most horrendous feelings in the whole place,” Samantha says of the jarring reception. Opening up the ceiling in the foyer to expose part of the second level was a game changer, as was adding a sleek iron railing and covering the floor in a checkerboard design that looks like marble but is actually durable ceramic. “We have four very aggressive seasons in Montana, so it was important for it to be easy to clean and not too precious,” explains Samantha.

The Kitchen That’s Trendy and Classic at the Same Time

While the new kitchen island is situated almost exactly in the same spot as the old one, everything around it changed. Now there’s a big glass door connecting the cooking zone to the deck. That way, Samantha has a clear view of her horses in the pasture. The couple opted for a 2022 color of the year (October Mist by Benjamin Moore) for the cabinets and clad the floors of the adjacent mudroom hallway in Saltillo tiles—a subconscious nod to their California roots. “Something I think a lot about with my work is timelessness, making things feel like they have a longer span to live in,” says Samantha. “I think that’s important with all aspects of design.”

“We’re really terrible flippers, in the sense that we love built-ins,” jokes Samantha. Even though the couple isn’t planning on turning around and selling the ranch anytime soon, they naturally keep resale value in mind and prioritize intuitive and intelligent organization solutions.

The pair tasked one of Jason’s best friends (a trusted cabinetmaker based in L.A.) with carving out clever niches like the second-floor closet system that hides the washer and dryer.

For the guest bathroom, Samantha got scrappy and spruced up an antique dresser from a local shop and plumbed it out so they could top it with a vessel sink. In their own space, they went with a curbless shower and marble floors. The prominent purple veining in the stone makes it look as if it’s all one continuous slab, so you barely notice they are actually individual tiles.

There was no need to strip the wood floorboards in Lake’s bedroom—there wasn’t any wood to begin with. “That room was actually a workout space with a rubber mat,” notes Samantha. Carpeting was the budget-friendly call in this case. The pair also reoriented the windows so they appear symmetrical from the outside looking in.

While the space is primed for play (and homework—peep the built-in desk), the girls can often be found at Samantha’s side in the barn. Jason, on the other hand, prefers riding his tractor over hanging with the horses. “He loves his lawn mower,” says Samantha. “It’s the one thing we fight about: I love wild meadows and he loves [short] grass, but at the end of the day, it makes him happy.”