A lake house gets the Jenni Kayne treatment. 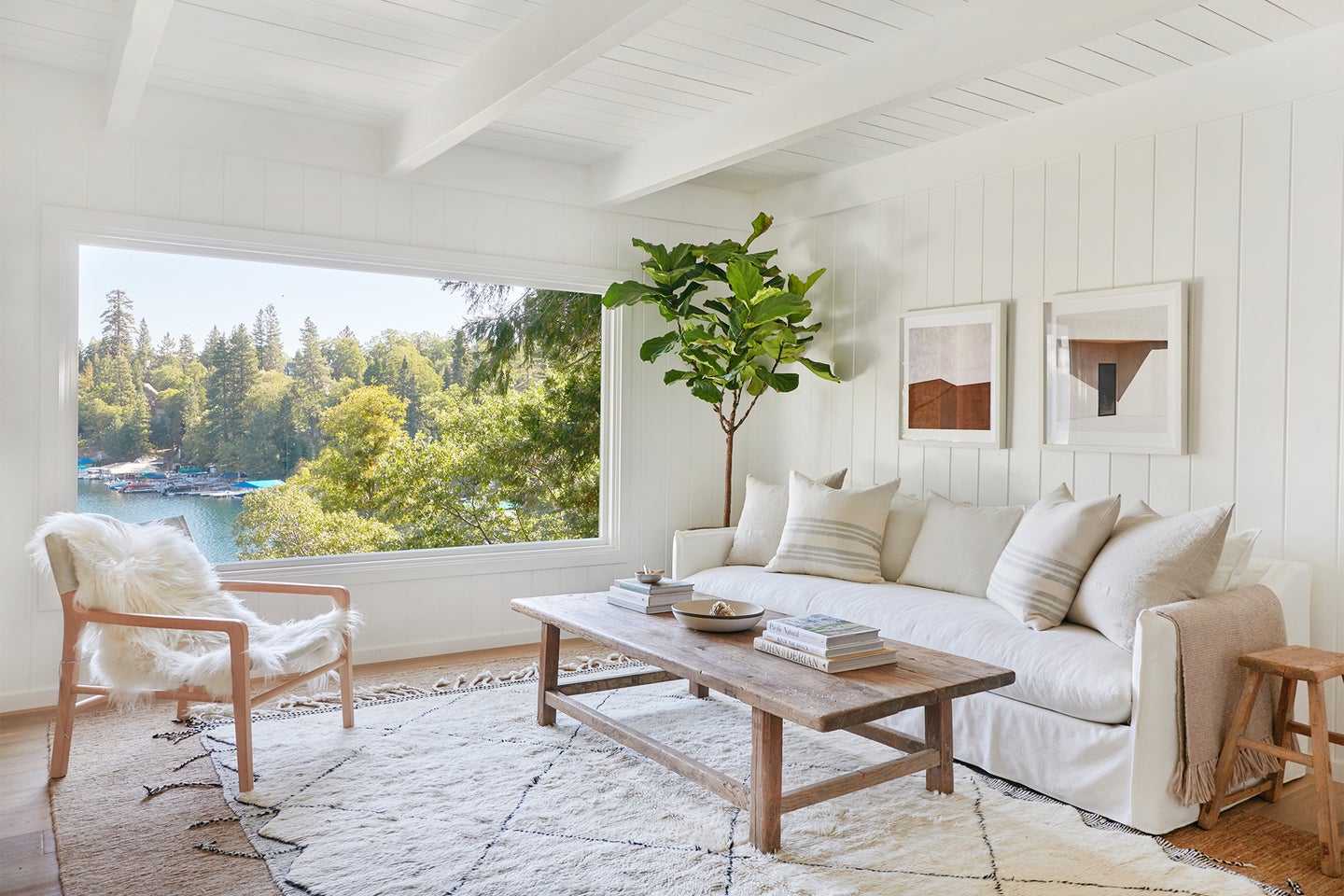 Before Julia and Ray Hunter got their hands on their vacation house in Lake Arrowhead, California, its best feature was the view. “It just looked like a painting on the wall,” remembers Ray. The house itself, dark and cramped, needed a lot of work: “It didn’t look like the owners had changed anything in more than 20 years.” But as Jenni Kayne’s CEO, Julia had a vision—and her husband, a contractor, was the perfect partner to help her bring it to life.

In a matter of months, they replaced the dark paneling with fresh white shiplap, painted over the brick fireplaces, removed (and added!) walls, and opened up the ceilings to reveal extra height. We chatted with Ray about the changes that made the biggest impact during the renovation.

They Created a Master Suite Out of Multiple Spaces

One thing that the home lacked from the get-go was a master bedroom, but Ray immediately saw potential in the basement lounge area next to the mudroom: “The fireplace and the separate layout lent itself perfectly to it,” he says. The living area became the larger bedroom, while a small adjacent bedroom was turned into a sprawling master bath. (The couple converted the existing bath into a walk-in closet.)

They Found a Few Feet of Ceiling Height in the Roof

Upstairs, another bedroom got its own makeover. The existing ceiling was only seven feet high, so Ray dug into the roof—and discovered five feet of space. “We realized we could certainly pitch it,” he explains. The team took out all the drywall and ducting and rerouted the plumbing before refinishing the now much loftier surface. To keep the space looking clean, they also swapped the ornate door leading to the en suite bathroom for a shiplap opening that practically disappears.

They Said Goodbye to a Niche in the Living Room

The once-dreary living room got a similar treatment: white shiplap walls and clean lines. But one area needed a lot of attention, a small dark nook next to the fireplace, which was once a wet bar. “We thought about converting it into a wine cellar,” says Ray, “but it felt awkward to have it under the stairs.” Instead, they got rid of the space altogether. What they lost in square footage they gained in wall space. The area now houses a stack of firewood for the hearth.

They Carved Out Space in a Closet for a Shower

The bathroom on the main floor badly needed a facelift, but the team wanted to keep the small space’s footprint intact to avoid moving plumbing (a generally pricey affair). There was just one small problem: The shower “was like a little dungeon,” remembers Ray. Luckily, they found a few inches of space in the adjoining bedroom’s closet and opened up the shower into it to nearly double its size. Glass panels make the stall feel even larger (and let the natural light in).

They Got Picky About the Doors

“It was strange; there were two doors side by side heading outside,” Ray says of the main entrance to the house, which once led to a run-down laundry room. To transform it into an airy, multipurpose mudroom, he simply removed one of the openings and closed off the passageway to the new master bedroom to gain additional wall space for built-in cabinets to house everything from the washer-dryer to outerwear. One entrance the couple did keep? A large pocket door opening up onto a lower deck that overlooks the lake. For both features, it was love at first sight.

See more stories like this: The Mudroom Is Now Jenni Kayne’s Favorite in This Cozy Lakeside Cabin A $1,000 Shiplap Ceiling Transformed This Dated ’70s Home A Daring Bathroom Makeover Where Bold Paint Choices Pay Off