You’ll Barely Recognize the Wood Paneling in This Den Makeover

The mudroom got an update, too. 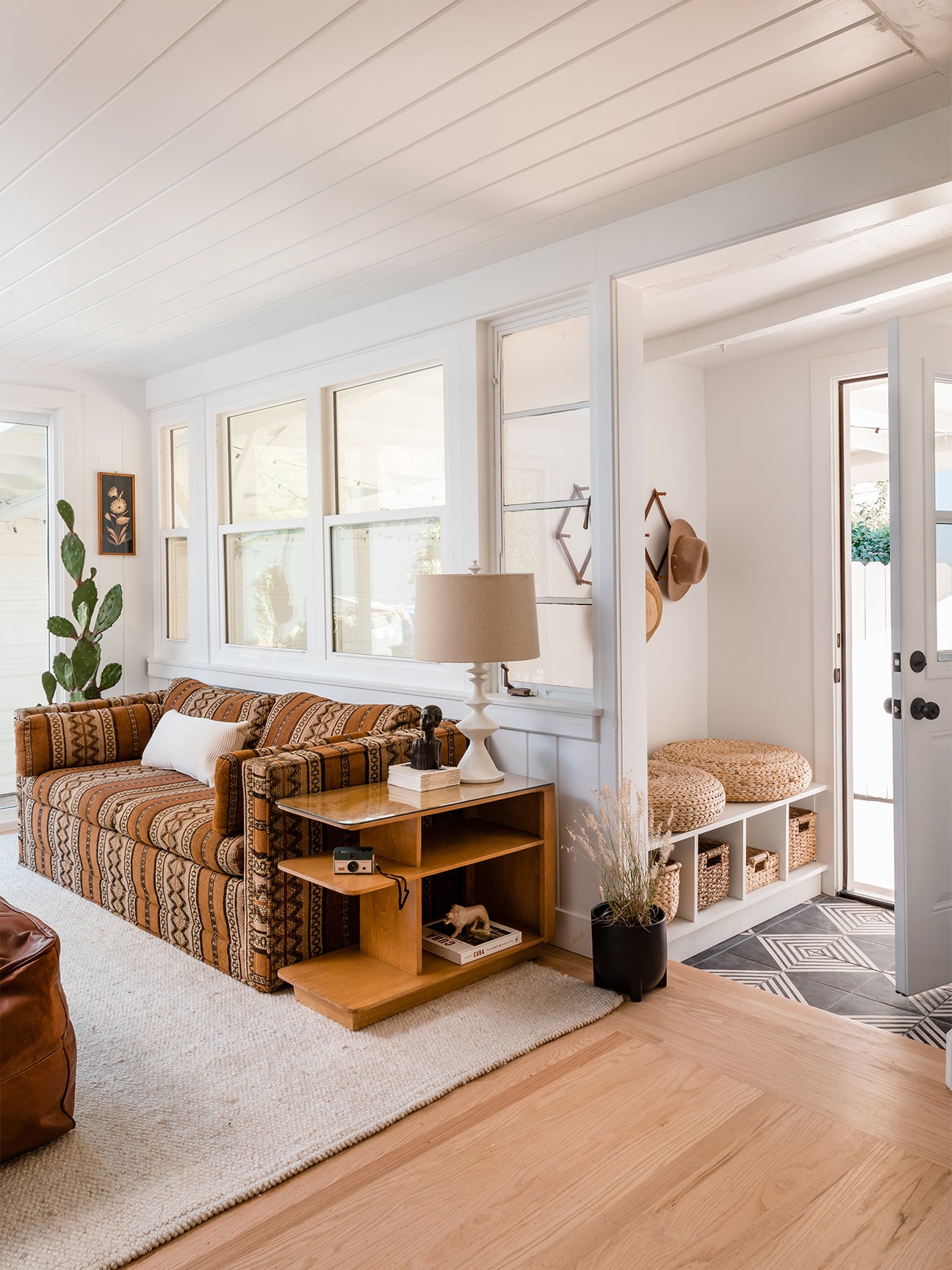 The word den immediately beckons images of gloomy, cave-like corners—and that’s exactly what designers Christina Valencia and Kele Dobrinski of Colossus Mfg. were dealing with when they stepped into their friend’s 1941 home in Sacramento, California’s Land Park neighborhood. The dreary sitting room, clad in dark wood and rust-colored laminate flooring, wasn’t exactly their idea of a cozy escape. On top of that, there was a wet bar bisecting the space. “If this were a restaurant, it would have been really cool, but as a living area, you have no visibility,” explains Valencia.

Being able to see out into the backyard was a top priority for the owners, who have three young children to keep their eye on. For Valencia and Dobrinski, it was a chance to flood the home with sunshine. But the designers didn’t stop at a fresh coat of wall paint and sliding glass doors: They also carved out a brand-new mudroom. Here, Valencia takes us through the transformation and reminds us there’s always light at the end of the tunnel.

Shift Your Perspective (Even If It’s Only a Smidge)

The overhaul was just one small part of a much larger remodel to the home, which entailed a brand-new kitchen (adjacent to the den) and oak hardwood floors throughout. While better flow was the main goal, the designers also wanted there to be a clear delineation between the two rooms. So they reconfigured the layout by pushing the den backward a few feet, closer to the yard. Before closing everything up again, they added overhead lighting for around $100 to further illuminate the space.

Bright White Does the Trick Every Time

The wood paneling in the den was hard to look at, but it was in good condition. The designers decided to keep the feature but paint it all, from the ceiling to the baseboards, in Sherwin-Williams’s Pure White in an eggshell finish. A professional painter tackled the task with no problem (the project only called for two cans—around $100). “Anyone could easily paint a paneled room like this in one weekend,” says Valencia. DIY-ers, take note: You’d likely have to apply an extra coat to make sure the grooves are fully covered.

Valencia and Dobrinski swathed the mudroom in the same shade so it would look like a continuation of the den. “It’s so small that if we had painted it a different color, it would have shrunk the space further,” says Valencia. The rattan cushions act as a barrier, protecting the walls and bench from scuffing.

Create the Illusion of Square Footage With Windows

The biggest expense was replacing the windows and adding the slider that leads to the backyard (around $2,500 total). The fixtures were a necessary swap: Winter in Sacramento can get surprisingly cold and the space wasn’t properly insulated as is.

“If we come across beautiful, old, iron-framed windows in a project, we’ll save them,” says Valencia. “These were not those.” The designers chose a double-pane design from Sierra Pacific and went as wide as they could with the opening for the sliding doors. “It’s an investment, but your home ends up feeling double the size,” she notes. The feature required some extra planning outside since there wasn’t a deck leading off to the backyard, but the illusion of more space was worth the cost of extra hardscaping.

Splurge on Tiles for Tight Quarters

In an effort to add visual interest to the mudroom, Dobrinski and Valencia landed on a geometric cement floor tile from Bedrosians. The graphic slabs came in around $120 for 16 square feet, but the owners was okay with splurging on a nicer material; they didn’t need that many squares.

Valencia’s motto when it comes to building out storage for families: Everyone has more stuff than they think they do. Hooks for hanging up jackets on the go and different-size baskets for shoes, hats, and more rank high on her list of must-haves—but so does a place to sit down. If you find a reasonable woodworker, Valencia suggests having a bench custom made (this tiny one was only $200).

“It’s the way to go because it maximizes every square foot in there,” she says. Other super-functional finds? The far-out vintage sofa, which folds out into a bed, and the salvaged side table with shelves. Altogether, they make this a place worth hibernating in.