See how a designer turned her empty roof into a living, breathing oasis. 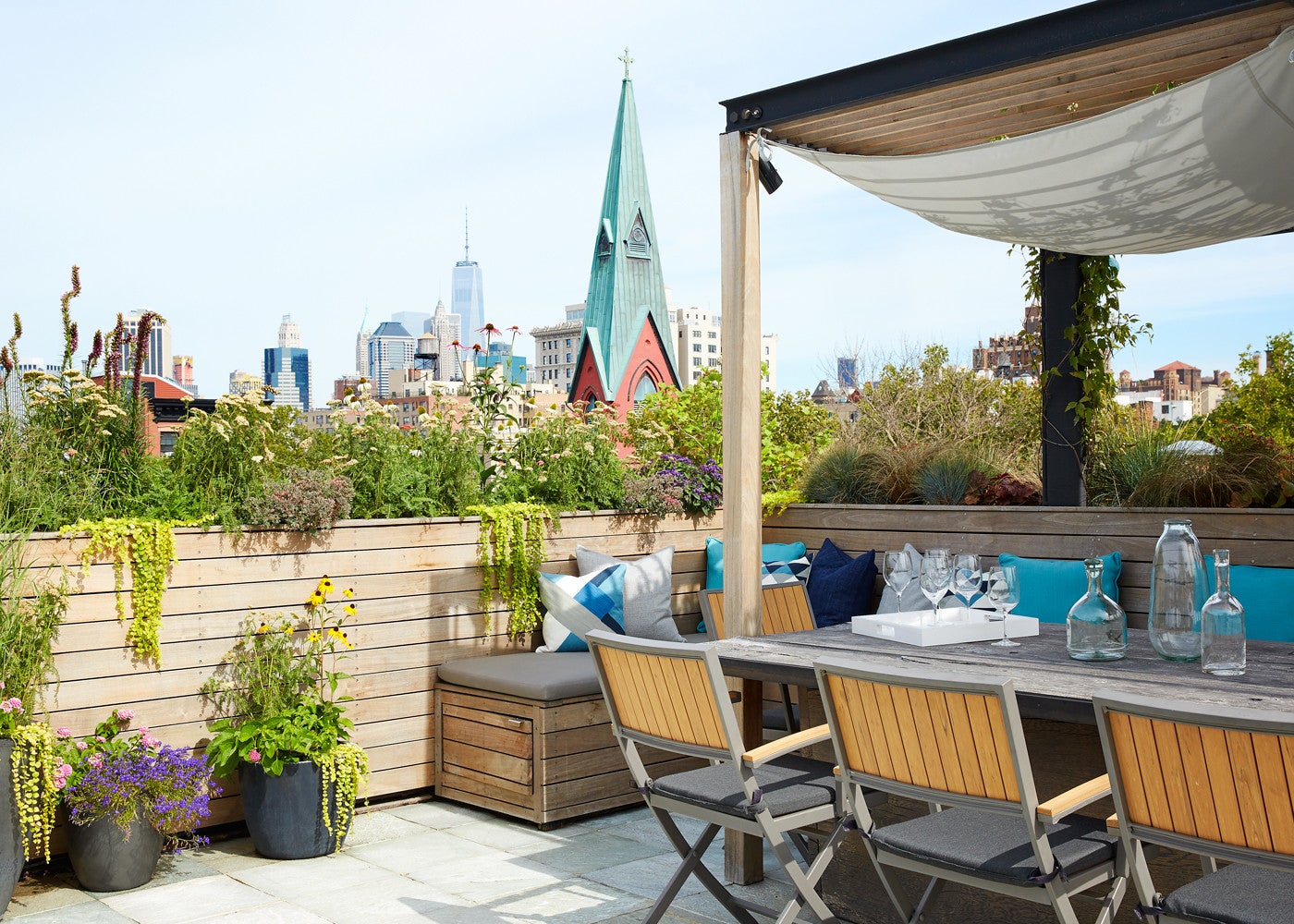 Interior designer Laurie Blumenfeld-Russo of LBR | HOME defines her style as “contemporary eclectic,” taking inspiration from all aspects of global design, and that’s exactly what she wanted to tap into for her own home in Brooklyn. Blessed with a roof deck perfect for enjoying those hot New York summers, she took to transforming the space into a plant-filled oasis for herself to find inspiration and entertain friends.

“I had a blank canvas to work with,” says Blumenfeld-Russo of the area that is now home to her cheerful garden. “But having plants was the major driving factor for my renovation. I am avid gardener, and I wanted a mini High Line park on my roof.  So, I brought in Studio Prospect Design (landscape architects) to help me bring that vision to life.”

The result is, in Blumenfeld-Russo’s own words, “magical.” A vast array of

, perennial blooms, trees, and grasses add color, texture, and greenery across, around, and over the custom built seating and pergola, creating a true urban garden in the sky.

In the beginning, the area was pretty much lifeless, with the roof covered with tar paper and a usable deck only a fourth of the size it is now. The project started as just a simple roof repair to fix a leak, but as Blumenfeld-Russo and her husband began the process, they realized they had the opportunity to create something special: “Forget buying a summer home,” says Blumenfeld-Russo. “Let’s build an outdoor living space, and use the entire footprint of the building!”

And so began the renovations. By relocating old exhaust fixtures, Blumenfeld-Russo expanded the size of the deck. And while plants were certainly her main concern, she also knew that with the amount of space she had, the area could be so much more.

“Luckily for me, my husband loves to cook. I love to garden, and we both love to entertain,” says Blumenfeld-Russo. “My vision was to create a space to speak to our individual passions, as well as our love of entertaining together.”

Thus, they installed a full chef’s kitchen, complete with a refrigerator, sink, barbecue, storage, and ample counter space. For herself, the focus was on an expansive urban garden with trees, plants, grasses, herbs, and veggies. A large dining table and eating area to seat “at least 10” was “a must,” and they had one custom made from 200-year-old reclaimed white oak.

“The rest of my home is neutral greys with pops of color. It’s very much the same palette in our roof garden,” explains Blumenfeld-Russo of the nature-inspired look. She installed built-in seating around the roof area to make sure her guests always stay close to the colorful landscape, and topped the benches with soft charcoal cushions and

in shades of blue for contrast.

“My pillow color palette was inspired by Mother Nature,” explains Blumenfeld-Russo. “It’s all about the blue sky and greens of my garden. Our sunset views over Manhattan inspired a second set of pillows in hues of pink, orange, and yellow.”

The biggest challenge, and a major cost, for the roof was the installation of stainless steel beams, which work to support the weight of the deck, plantings, and furniture. “It would allow us to sleep peacefully at night, knowing the building was safe,” says Blumenfeld-Russo, noting that the installation was “quite the ordeal.”

“They had to shut down our street, and use a crane to bring the beams to the top of our brownstone,” she says. “It was so crazy and stressful to watch that our contractor insisted we not be home when the crane was operating. But thankfully, all went as planned.”

The additional beam support and vast amount of space also allowed Blumenfeld-Russo to divide the roof into distinct areas, all suited for different purposes. In addition to the main entertaining here, there’s a quiet corner with a lounge chair (accentuated with a stone side table) where Blumenfeld-Russo can soak up the sun, and the central garden area gives her a space to reflect.

“We just went for it, the big ideas and all the small ones,” says Blumenfeld of her design choices. “And like all design projects, it’s a living, breathing process with unplanned twists and turns. But it paid off when I saw my transporting, magical oasis.”

Before and After: Inside a Fresh Farmhouse Reno How an Accidental Gut Remodel Gave This CEO the Home of Her Dreams Proof You Can Renovate Without Sacrificing Old-School Charm