This Connecticut house went from dark and dated to bright and breezy. 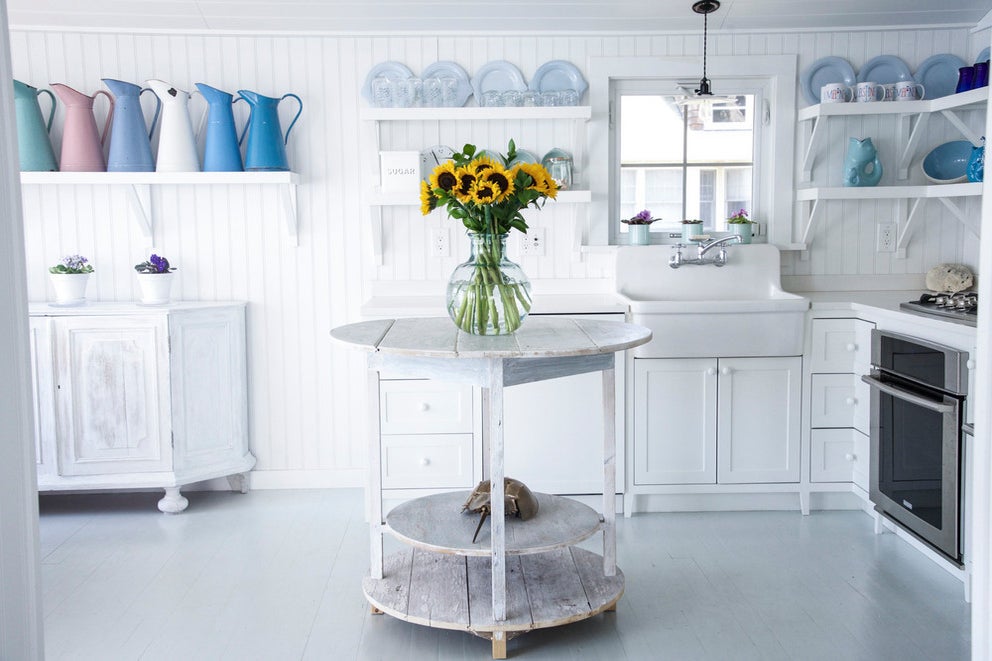 The gut renovation of Jaqui Lividini’s 2,000-square-foot Connecticut beachfront home was not, in fact, by choice. Following two separate hurricanes and new city zoning requirements, the CEO of Lividini & Co. ended up totally redoing the home.

“I always say about the house: We wanted to restore it, and it didn’t want to be restored. It fought me every step of the way,” says Lividini. “It caused me more heartache than any boyfriend I ever had! But now it’s the bed of tranquility, a wonderful place to be.”

Ideally situated in Haycock Point, the home was originally constructed in 1901. Lividini and her partner John Speredakos purchased the home in 2007, initially hoping to simply restore it and bring back some of its authentic features. Some of the home’s features, like wood paneling (of the 1970s variety, not the chic variety) and avocado-colored appliances, needed an update.

Instead, what followed was a five-year restoration period that saw a complete—and fairly mandatory—transformation from the original structure.

To comply with new zoning laws, the couple had to raise the house, which in Lividini’s words “was kind of devastating because we loved the idea of this little bungalow cottage; lifting it up would have given it a whole different effect and we didn’t want a big house.” Nine feet higher and a new garage later, they were finally ready to start decorative renovations.

Lividini recruited her friend and designer Charles Riley to help make the process a little less overwhelming. They purposely salvaged some things from the first structure: beadboard paneling on the upper level, as well as the original floors. Then they filled it with textures and materials that one might find in a house built in 1901—the goal here was to stay true to as much of the home’s charm that attracted the couple in the first place.

“I feel like one man with a hammer and nail did the whole thing because renovation took forever,” says Lividini. “But when we were finished, we had an even more spectacular view. We get sunsets and sunrises. The light is incredible. The bird life on the Sound is incredible.”

Lividini, who prior to launching her own company worked at Saks Fifth Avenue as the head of fashion for many years, cites her travels to Europe as a big source of inspiration. Drawn to the country-casual vibe of parts of France and England as well as the classic style of the New England seaside, she drew in elements from around the world to craft her home, whose style she dubs “Provence meets coastal New England.”

Some of these elements—the red, white, and blue color scheme, for example—are more obvious than others. The cultural interest lies in Lividini’s stunning collection of antiques, which she acquired over years and had mostly been sitting in storage, waiting to be used.

The pillows are a great example of this, constructed out of antique fabric she had picked up years ago and saved for the perfect project. In the kitchen, the eye-catching collection of rainbow-hued enamel pitchers are the product of various trips to Parisian flea markets. The zinc clock, another flea market purchase, was a nightmare to bring stateside because of its weight but now hangs proudly in the entryway.

The distressed wood table at the heart of the kitchen, Lividini’s take on a traditional island, is a local treasure: “It was found right here in Connecticut, in an antique store. It feels like one of those classic new England pieces; someone probably built it out of old boards from their basement. It’s a really primitive piece, but it’s very new England,” she says.

However her favorite piece, though antique-inspired, is actually from Kohler: the beautiful farmhouse-style kitchen sink.

“The whole kitchen was built around that sink,” she says. “I had seen an antique sink like that up in Maine that I fell in love with but was in such bad shape. I couldn’t believe Kohler had a sink like that. It’s my favorite thing in the entire house.”

Despite her collection of global goods, Lividini is the farthest thing from a big box retailer snob, crediting brands like Serena & Lily and Rejuvenation for several of her most-loved pieces. And turns out, she’s just as much of an Ikea fan as we are:

“I’m there almost every weekend. You know what the best buy from Ikea is? The mattresses, and also the quilted pillow protectors are unbelievable. They’re inexpensive, and they’re totally hypoallergenic. I would definitely recommend them.”

A mix of high-low and European-American style, Lividini’s seaside home is enough to inspire anyone to want to go antiquing. Read on for some of her tips for vintage shopping like a pro.

Go with your gut.

“Now, it’s so easy because you can have your phone with you and look up anything. Twenty years ago when I was collecting quilts and fabric, it had to be an instinct. Your instinct is the most important part.”

Don’t worry too much about sticking to a theme.

“I think that when you buy things you love, they all go together…and everything shouldn’t match too much anyway.”

Get help when necessary.

“Charles Riley would help me when I had a warehouse full of stuff really figure out what went where. It’s overwhelming—don’t get carried away and buy too much stuff.”

“Even though the house is full of antiques, nothing is a truly valuable antique. I don’t think anything is over $2,000. If you’re buying a $100,000 armoire, to me that’s pressure because it has to really be worth it, and you have to be able to re-sell it. But when you buy inexpensive antiques at flea markets or antique stores off the road—if it’s not too expensive and you love it, does it matter if it’s authentic or not?”