And the secret to its copper gutters. 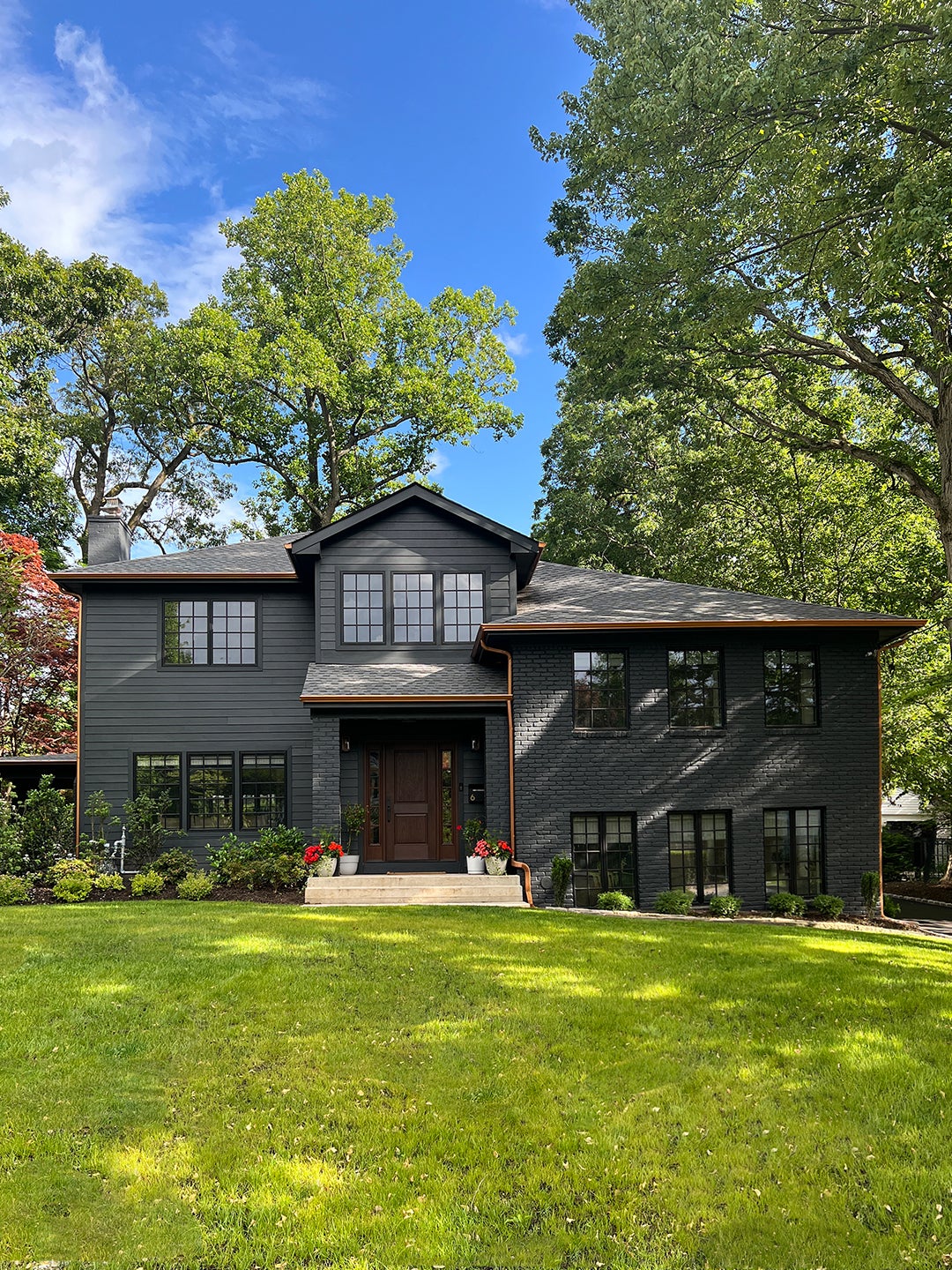 A white and brick 1950s split-level situated in a quiet, suburban Long Island neighborhood might not catch many second looks. But to designer Danielle Chiprut, all she could see was potential. “It was the worst home on the best block,” says Chiprut, founder of Danielle Rose Design Co.

Her clients, a family of five, needed to add more space to the three-bedroom, and the exterior was desperate for a fresh coat of paint (more on that in a moment). Here, Chiprut walks us through the inner and outer transformations.

Map Out a Vision

“The exterior was crumbling, the lawn was unkempt, and the shrubs were overgrown—an eyesore on a beautiful block,” Chiprut says. So her team carefully planned out interior and exterior renovations that would improve curb appeal (and the family’s quality of life). “One of the biggest changes was on the brick side of the home,” she says. “We were able to put in two rows of three windows, which added symmetry.” (And light.) She also moved and replanted some trees and shrubs, then brought in a dogwood tree, spirea bushes, and rhododendron to complement—but not overpower—the new look.

Work From the Inside Out

Although it looks like only the exterior changed, Chiprut made extensive alterations to the inside of the home first. For example, the third-story addition allowed room for a “grand, two-story entry,” a bathroom, a loft space, and three kids’ bedrooms, bringing the grand total to five sleeping quarters. Additionally, her team pulled the front door forward, giving the foyer some breathing room.

Head to the Dark Side

To make the exterior black, Chiprut selected 6-inch James Hardie fiber cement siding in Shou Sugi Ban, a nod to the Japanese technique of preserving exterior wood by charring it with fire. For the brick, her team matched a custom color to the siding. But they had to wait to paint until the weather warmed up, which meant that the family lived in a two-tone home for a few months. But in the end, it was all worth it.

To contrast the dark exterior, Chiprut went with copper gutters, gooseneck light fixtures, and studded lantern boxes, which all easily stand out. But here’s a secret—those gutters aren’t made of real copper, which can cost a small fortune and change color over time. “They are actually aluminum, finished in a copper color,” Chiprut explains. “It’s a cost-effective option that creates a real wow factor.” Also, to match the exterior, the windows were updated to black casements. Now no one drives by without giving the home a second look.