Renovation / Before & After / Exterior

More time for one another; less for painting and repairs. 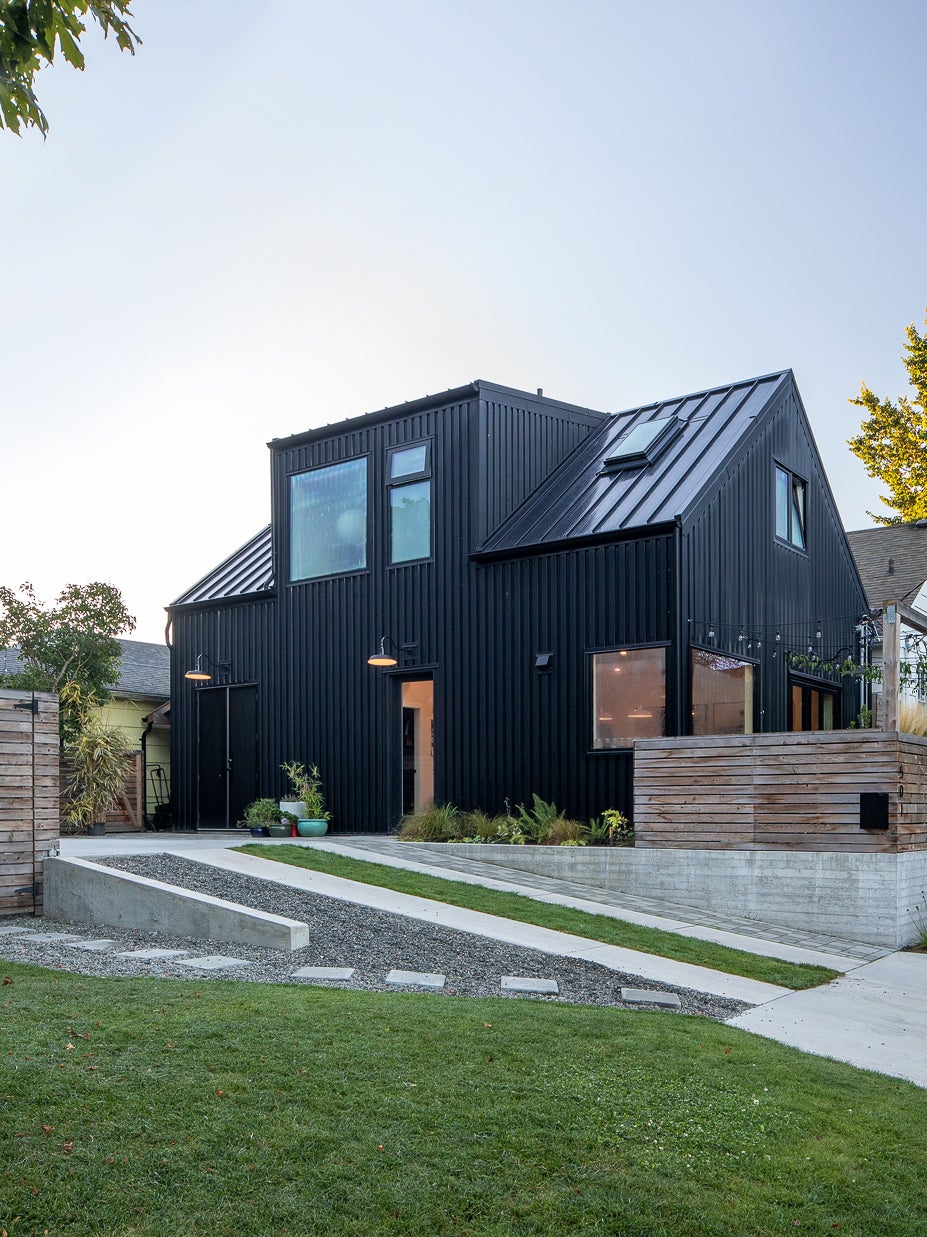 Adam Gilmer likes to joke he’s that guy in the neighborhood. On any given afternoon when it’s warm enough on Vancouver Island, you’ll find him standing in the driveway, hose in hand and Birkenstocks on, cleaning his house and telling his kids, 5-year-old Oscar and 3-year-old Frida, to stay out of the street. “It’s not all the time, but when a bird flies by and really makes a mess, it forces my hand,” he says, laughing.

When Gilmer, a longtime photographer who recently launched a furniture company called Caramba, and his intern architect wife, Sara, bought their property in 2016, there was just a small 1940s home on the plot. Fortunately the land was zoned for a duplex. With the help of local firm Strong Built, they spent the better part of the next 10 months building a barn-inspired structure that would ultimately serve as their main residence. An occasional bath is the only maintenance the exterior really needs, all thanks to the fact that it’s clad in hardy powder-coated steel. Ahead, Gilmer gives us the backstory behind the design and why the siding material should be top of mind when it comes to your forever home.

Designing the place from scratch allowed the couple to think far into the future, and spending $6,000 every five to 10 years on exterior paint jobs was not something they wanted to do. “We just wanted it to last forever,” says Gilmer. The metal was more expensive up front than wood, but it isn’t susceptible to rot. It also achieved the clean Swedish barn aesthetic they were going for (there are no unnecessary soffits or overhangs). “There’s a reason those buildings and sheds are clad in metal—it’s super-robust,” says Gilmer.

While the structure is a lot different than their shingled white house next door (that siding requires a decent amount of upkeep), the pair designed the new home to match the pitch of its roofline. That way the new building doesn’t look so out of place. “It’s like a modern interpretation of that form,” explains Gilmer. “They both speak the same language.”

Prime It for Heating and Cooling

The splurge-worthy windows were Gilmer’s choice. The aluminum panels, by Minimal, swing open and tilt, so they can be left open when it’s raining. The couple also invested in spray-foam insulation in the ceilings to help muffle the sound. “And it makes the space more thermally efficient,” notes Gilmer. The grooves in the corrugated siding act like air channels, so instead of just soaking in heat during the summertime, it circulates everything.

Another expense was the big bifold door that leads directly out to the patio. But the pricey addition was worth it, given it effectively adds around 400 square feet to their 1,300-square-foot home when it’s nice out. “It’s fenced in, so the kids can’t run out into the road or anything,” says Gilmer. Simple string bulbs from Costco light up the bonus dining area at night.

Make It a Family Affair

The only unforgiving feature is the semigloss finish on the metal. You can see cobwebs, dirt, and—of course—bird droppings. But that’s where Gilmer comes in with his hose, an extendable cleaning brush that’s meant for wiping down RVs, and a biodegradable car wash. If he’s lucky, Frida might lend a hand. “She loves mopping and helping me do all the household chores,” he says. Oscar is more interested in biking and skateboarding around the driveway. “We’re so lucky to have been able to build this house while our kids were little and design it [so they] grow into it,” says Gilmer. “It’s not a starter home—it’s our forever home.”