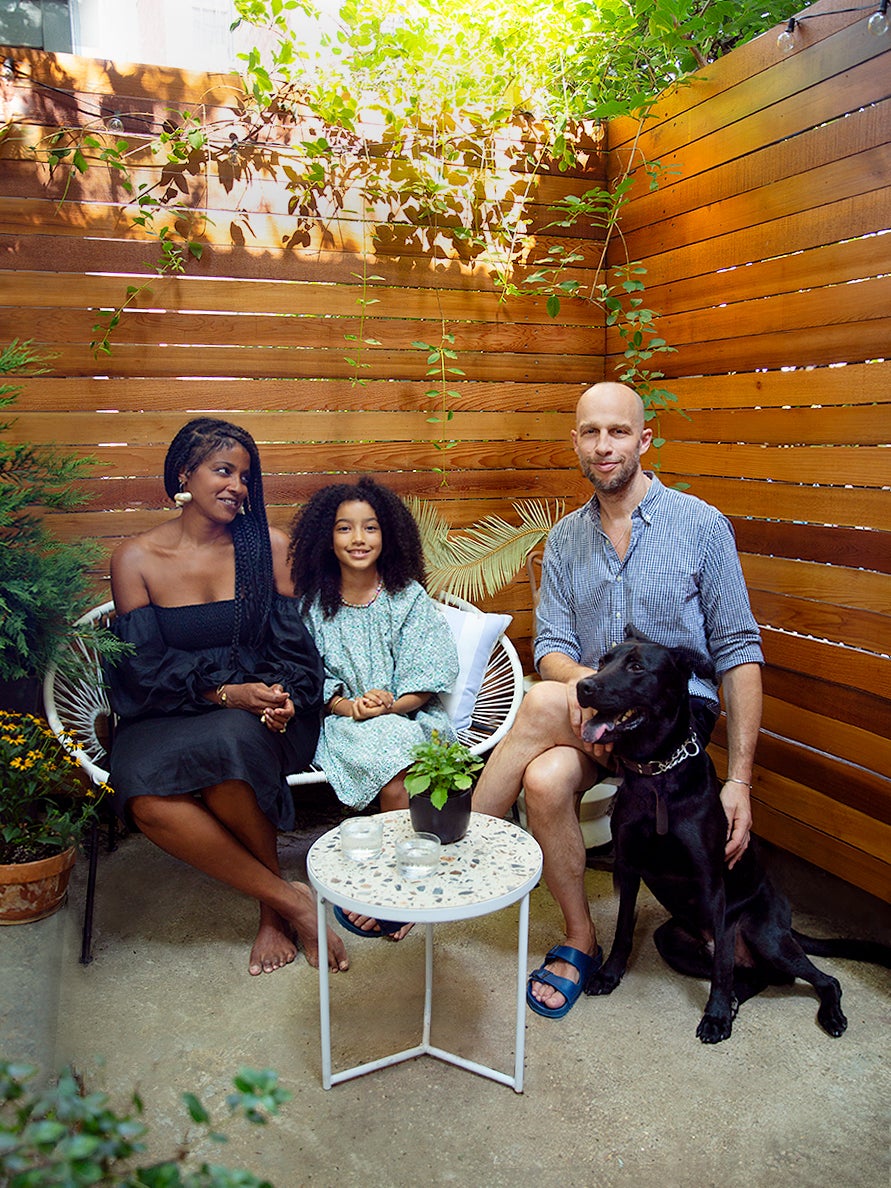 In late March, People of 2morrow founder Sybil Domond found herself in a dress, at Home Depot, loading 32 50-pound cement bags onto a cart. “Once I got all of them on there, I couldn’t push it,” she recalls. “I slowly inched my way to the checkout counter.” Back at her Greenpoint, Brooklyn, townhome, her husband, Dan Lessin, was out in the backyard digging holes for the fence posts they were about to install (this is after using three different types of chainsaws to cut through a massive tree root). So it was on Domond to gather the supplies to secure the framework. “I made one trip,” she continues. “It was so physical but so satisfying, because I did it by myself.”

Today, the roughly 8-by-18-foot fence the couple built makes up just one corner of their shady backyard (the giant maple was not harmed in the root-cutting process). A quiet haven amid the bustling city, the space is a place where Domond can enjoy her morning coffee; her 10-year-old daughter can sit down with a good book; and their dog, Dakota, can run free.

Instead of going to the hardware store to source wood for the fence, the couple scoured Craigslist and eventually came across a lumberyard in Wappingers Falls, just outside of the city. The orangey red Western cedar they bought there was only 70 cents per linear foot, coming to a total of $138 for all the planks. When installing the boards, the couple flipped some of them over so that the rough side was showing. “It adds so much texture,” says Domond.

To preserve its color (cedar turns a rustic silver tone over time), they coated it in Osmo, a natural sealer from Germany. “When our daughter was a baby, we were concerned about finishing the floors with anything toxic,” says Domond. “My husband discovered this product after a ton of research. It leaves a beautiful finish.” And the sealant only has to be reapplied every 10 years or so.

The first thing Lessin and Domond did when they bought their home 12 years ago was install large, French-style windows. By doing that, they were left with a ton of bricks that had fallen off from the old facade. “We just kept them,” says Domond. “They’re from the 1800s—you can’t find bricks like that anymore.” They stacked them up and built a makeshift wall by the back steps, peppering in waterpots from India so the structure looks like an ancient ruin. Newly planted bamboo is just starting to sprout from the boxes below. “Eventually we’ll have a wall of shoots to create privacy,” she says, noting that the fast-growing plant does well in the wintertime, too.

While visiting friends in Provence, France, last year, the pair noticed their cobblestone courtyard was covered with a windsail, of all things. In that space, the fabric was draped horizontally to keep the area cool, but it gave Lessin and Domond the idea to hang one vertically at their home. Their thinking? It will hide the neighbor’s plastic siding. “Your eye is drawn to this really beautiful shape and pattern as opposed to the vinyl,” explains Domond.

After searching high and low for a vintage one, she bid on—and scored—a classic 1970s sail for $250. The canopy is screwed into a nearby fence and the side of the home with hooks. “We called our tenants downstairs and were like, ‘We’re going to be hanging up a sail—don’t be alarmed!’” says Domond with a laugh. “It’s gotten a lot of attention from our neighbors and friends. They love it.”

Below, the charcoal-colored stairs and railing leading inside are coated with a textured paint so no one will end up slipping on the metal in the rain. The rest of the exterior is a pastel lavender-blue—a hue inspired by their travels to Europe. “When the string lights are on and you hear the windsail blowing or the birds chirping, you start to wonder, where am I?” says Domond. “It’s magical.”