Is This Style of Construction Bound to Make a Comeback?

A look at one couple’s IRL Lincoln Log cabin. 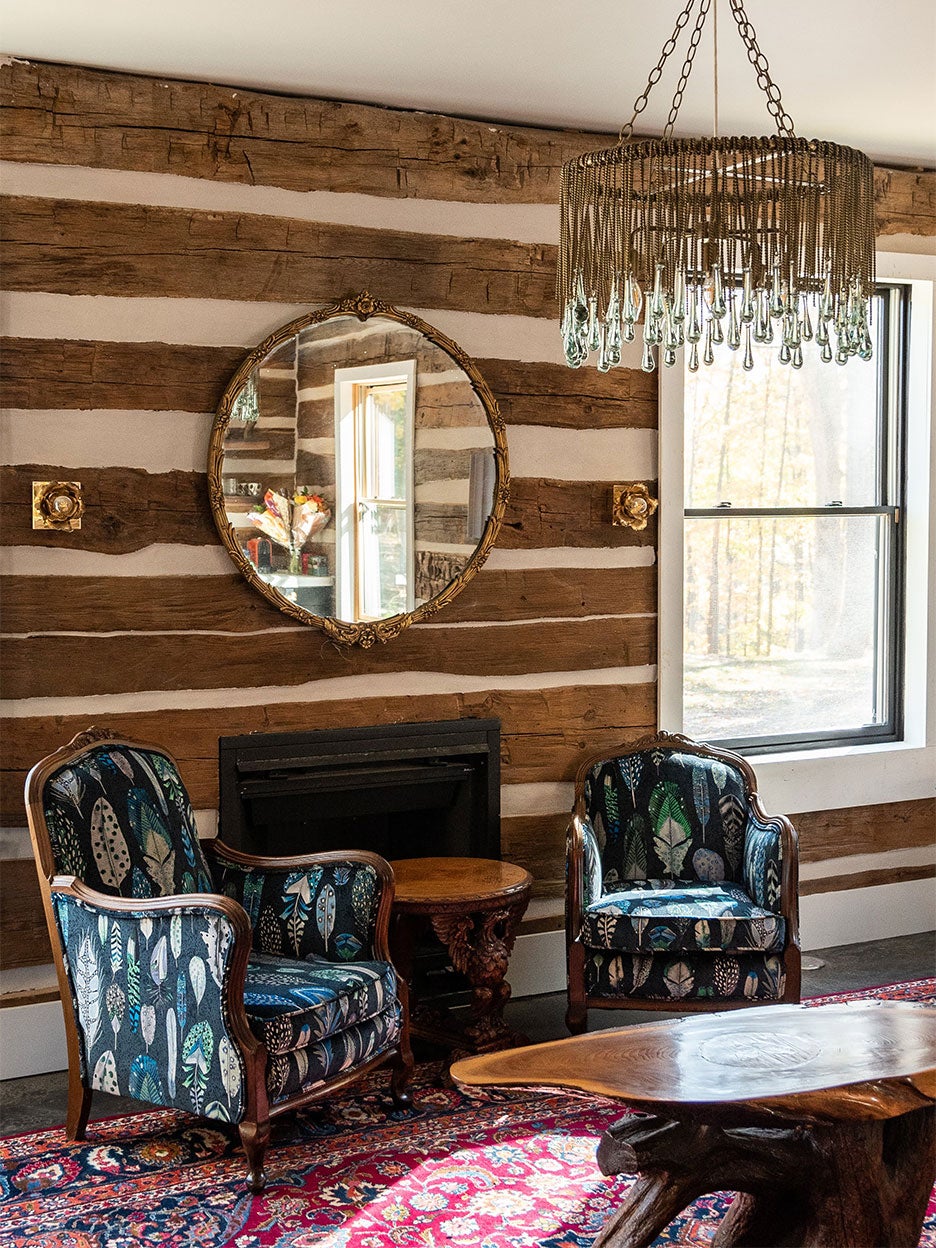 About five years ago, Cristy Lee McGeehan ripped the cover off an Anthropologie catalog showing a “calm and cool” cabin and handed it to her husband, Colan, to file. “It spoke to us almost on a soul level,” she recalls. Fast-forward to 2020, and that piece of paper is now a reality for the Shawangunk, New York–based couple. The structure, a guesthouse located a football field’s distance away from their main home, was primarily a DIY. The McGeehans only hired out major steps like framing and roofing, and taught themselves how to do everything else, from building chimneys out of salvaged bricks to sealing the gaps with chinking (the tacky material that makes the space weather-tight). “It’s almost like putting the icing on a cake,” Colan says of the method.

The most daunting thing about building a log cabin from scratch, according to Cristy Lee, who essentially took on the role of contractor, was walking up to the construction site. “To not feel crushed by the enormity of it all was really hard,” she says. “I’d speak my daily goals aloud to the universe and try and focus on the task at hand.” Sourcing the 150-plus-year-old logs that now make up the five-bedroom structure was just one part of the process—cutting holes for windows and outlets, topping it off with a vaulted roof, and applying the “glue” that holds it all together is something you don’t often see or hear about. As labor-intensive as the construction might be, these sound structures of yesteryear may just inspire you to go back to basics.

Buying reclaimed logs was easily the most expensive aspect of the project, says Colan. The pair worked with the TV show Barnwood Builders to salvage pieces from different barn structures from across the country (some came from Pennsylvania, others from Kentucky and Tennessee). The pre-assembly, which took place in West Virginia, is also costly: Before delivering the logs via three tractor trailers, the crew puts the custom-cut parts together at the facility to make sure they all fit, numbers them, then disassembles them.  “It truly is stacked like Lincoln Logs,” says Cristy Lee. Except unlike the toys, these have old burn marks from oil lanterns.

Piecing Together a Modern Puzzle

In addition to numbering the logs at the boneyard, the crew outlined where the windows and doors would need to go, based on Cristy Lee’s design specs. Colan was the one who would end up wielding the chainsaw to cut through the dense wood (he estimates that one window hole would take him about an hour to carve out, followed by a three-hour break). “I’d never done anything like that in my life,” he recalls.

Throughout the process, the McGeehans found that answers weren’t always easy to come by, given the construction was so unique. Something as simple as putting in an outlet would become a big deal. “It might take one day for the subcontractor to drill a hole for it,” she says, adding that, at one point, she found herself jumping up on the roof to help put in the trusses. “You can’t just call in an expert.”

Today it’s most common to use an acrylic system like Perma-chink to finish off a cabin facade, but back in the 1800s people filled it with a mix of cement, textiles, and corncobs (really anything they could get their hands on, notes Cristy Lee). After getting a quote for $80,000 to seal the home, she decided to take on the labor herself (only spending around $10,000 on materials).

On days when the weather was nice, Cristy Lee would start by filling the opening with a rigid foam insulation, then apply the chinking with a trowel. “I was not allowed to do it because I lacked finesse,” says Colan, laughing. Working in the summer heat and humidity was brutal, she admits, and when hard rains came she often had to redo her work (the stuff takes time to expand and cure).

The whole thing took around six weeks, even with the help of a man-lift that Cristy Lee’s dad lent her, but the material lasts for 30 years. “Chinking the inside of the house was more fun,” she says of seeing it come together. “You don’t do it until the very end of the project because it’s super-messy.” Eventually, the work became almost meditative. She’d walk down to the house, grab her tools, and put in her headphones. “It’s the thing I’m most proud of,” she says.

Cristy Lee scrubbed every single log down with a special liquid concentrate before finishing it with a sealer that protects against splinters but, more important, smooths out the texture so its less likely to collect dust. When it came to decorating the place, she opted for modern chandeliers, patterned sofas, and vintage rugs instead of more wood. “People either hate log cabins or love them. Either way, you have a specific idea of what it is,” says Cristy Lee. “I really wanted to do something completely different; it’s not all flannel and blankets.”