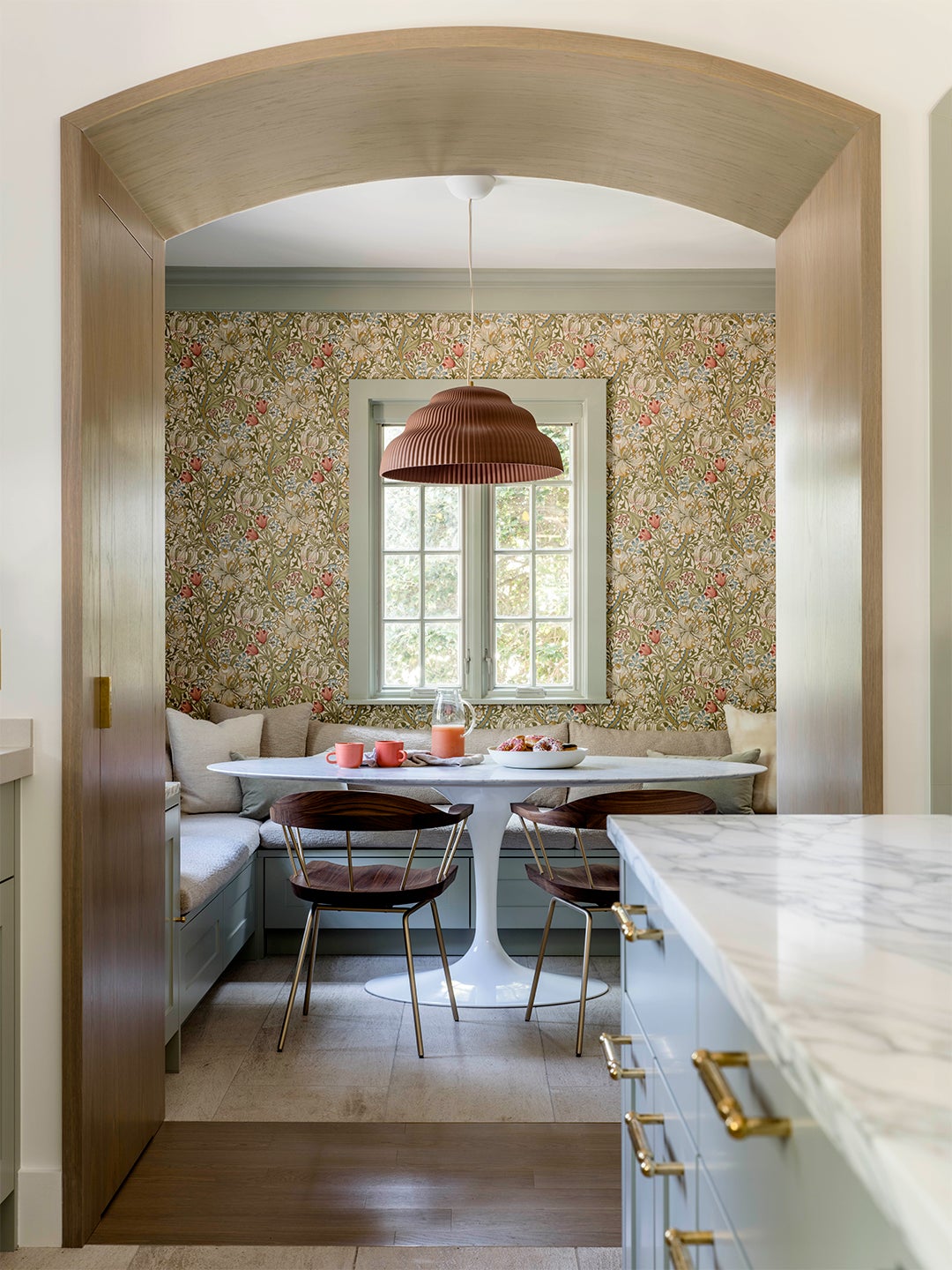 New York designer Kate Gray is aware that dark wood kitchen cabinets are making a comeback, and she’s here for it. “I’ve worked on a lot of brownstones, and one that we’re doing in Park Slope, Brooklyn, has older wood paneling that we’re keeping,” shares the Hamilton Gray Studio founder. But there is a special breed of circa-1990 cupboards that she can’t get behind, especially when it’s in a 1924 grand Tudor-style house. After four years of dealing with their space as is, a couple living in South Orange, New Jersey, called on Gray to reimagine their dark and dated kitchen, while also carving out a few bonus zones.

Aside from replacing the blah-brown cabinetry and granite counters, moving the fridge from its niche by the side door was at the top of the designer’s to-do list. “It felt like it was in a separate room,” recalls Gray. “It’s a big kitchen. I was like, there’s got to be a way to get that refrigerator into the main space!” Rejiggering the layout slightly so that they could fit a new paneled fridge in the primary cooking zone also made way for a 50-square-foot mudroom with a coat closet. She then revamped the dining area with storage—and a secret surprise. Get the lowdown on the full renovation, ahead.

Gray and her go-to cabinetmaker, Erik Gonzalez, were going for an old-world English look, so they introduced touches of ornamentation to the new millwork without going overboard with intricate molding or beaded door fronts. Around the sink base cabinet and the Lacanche range, they installed half-round vertical dividers. “It makes it feel unique and softer,” she explains. And in order for the cupboards above the sink to appear less heavy, Gray swapped the reflective glass for mesh inserts. Finally, she splurged on hardware by O&G Studio. An added bonus? Going fully custom meant they could incorporate clever features inside the drawers and cabinets too, like a hidden bin for root vegetables.

Gray’s background in furniture design fueled the plans for the new island. Pulling from the same dowel detail elsewhere in the space, she added curved “legs” (sourced from a lumber-supply catalog) to make it look more tablelike. While the island is topped with marble to further amplify that effect, the cabinetry features a lower-maintenance honed Caesarstone in the color Fresh Concrete.

Save the Hardwood for the Living Room

“In my opinion, there shouldn’t be more than one type of wood floor in a house unless they are on different levels,” shares Gray of her decision to replace the sad, skinny, orange-toned boards with limestone. “Tile is much easier to maintain longer term in a kitchen,” she adds. She opted for a particular type that has a brushed texture, rather than a polished finish, so it doesn’t look too new. The only exception to her rule was lining the floor within the archway in oak.

Gray kept the shape of the existing opening leading to the breakfast room but widened it to 30 inches to make way for a hidden pantry cabinet (peep the inset door on the left). Constructing an L-shape bench in the 84-square-foot dining space, now swathed in a floral Morris & Co. wallpaper, not only maximized seating, it offered bonus storage (there are drawers underneath).

Kick the Appliances Out of the Mudroom

Given the side door leading to the garage is the entry that gets used the most, it was a natural place to carve out a proper mudroom there. To make it as functional as possible, Gray put a closet where the fridge used to live, lined the wall in peg rails (painted in Farrow & Ball’s Setting Plaster), and added a built-in bench where the couple’s two kids can sit and tie their shoes. Steering clear of reintroducing wood floors to the space, the designer elevated the transition between mudroom and kitchen with a wavy Aimee Wilder cement tile. With floors as pretty as these, any mud in this room will no doubt be kept to a minimum.