This Sag Harbor Saltbox Is Proof Every Home Needs a Hidden, Narnia-esque Nook

Inside the house’s imaginative renovation. 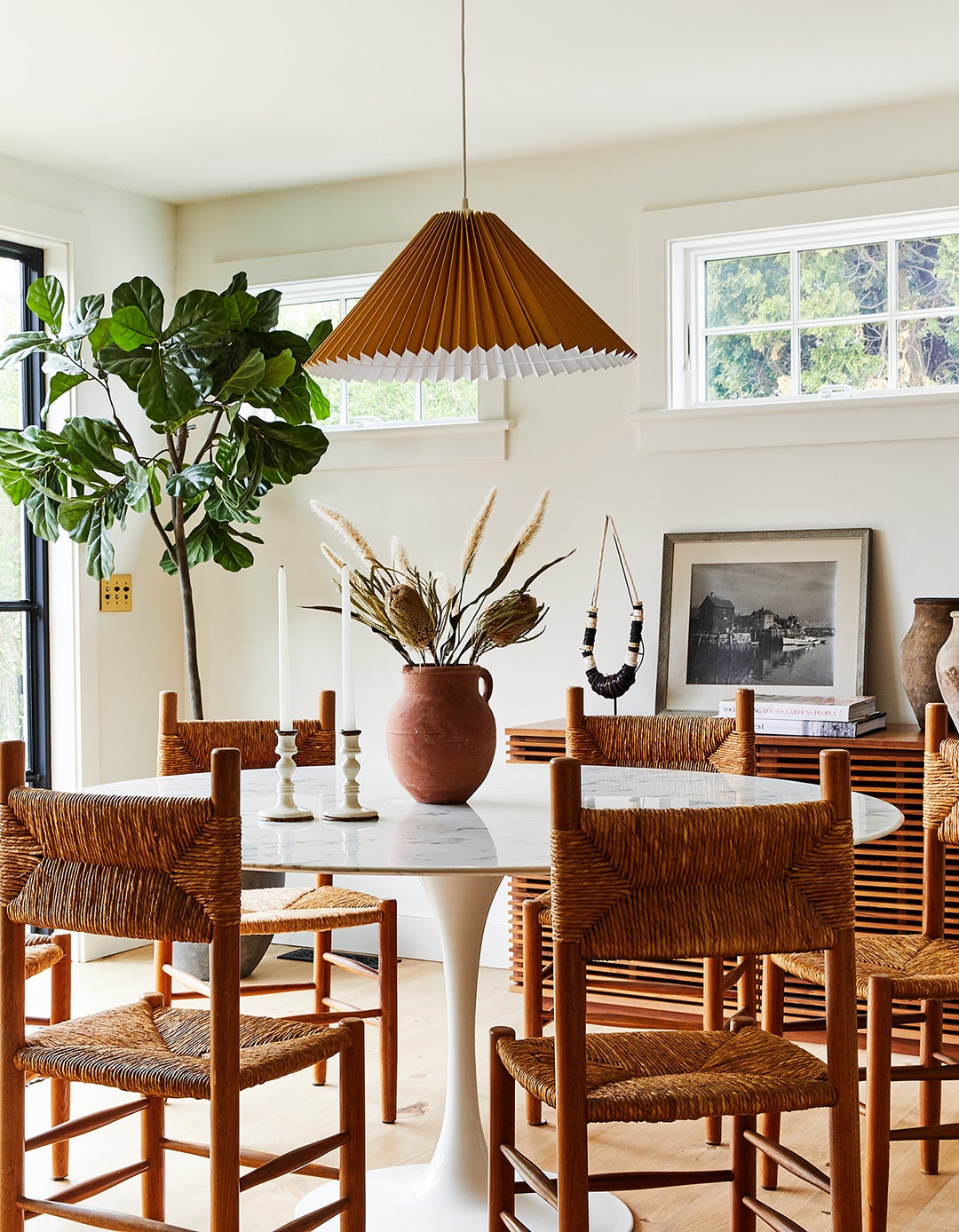 The 1865 saltbox in Sag Harbor, New York, had been stripped of its original features in favor of ’90s finishes, not to mention the view from the front door was straight into a dated bathroom. But it had two things the neighboring homes didn’t: an unfinished basement and a massive studio space on the second floor. It was just the type of real-estate project that Ethan Feirstein—who grew up spending weekends in the Hamptons and owns a house nearby with his partner, Ari Heckman, CEO of ASH NYC—was looking to sink his teeth into.

Luckily the aforementioned bathroom had two doors, so blocking the opening facing the entrance (and adding a hall closet in its place) was an easy fix. The other major layout obstacle, however, was a bigger undertaking. The main staircase sat smack in the middle of the living room, a poorly thought-out addition that blocked the natural flow of the space.

Ultimately, it had to move back into the entryway. There, Feirstein could tuck an emerald green powder room under the steps and set an Alpine-style round table in front, which Andrew Bowen, partner and head of staging for ASH Staging, a division of ASH NYC, found in an antiques store. (He would end up handling the task for the whole home, down to the swan-shaped baskets.)

With the living room now wide open, Feirstein mirrored the mantel in the front parlor there and added 8 inches of ceiling height to the entire downstairs. He gained the first few by exposing the original beams, the last handful by removing a layer of oak flooring that had been laid on top of the original pine planks. “We weren’t 100 percent certain what we were going to find underneath,” he admits, but the shiny, cherry-stained boards had to go. The pine was in good enough condition that Feirstein invested in having some of the pieces removed, rebuilt, and relaid more tightly.

The kitchen layout also suffered from an awkward floor plan, with the refrigerator sitting on top of a platform. Add yellow paint and dark wood to the mix, and a makeover was a must. Knowing the walls would be a crisp white, Feirstein went saturated for the cabinets: Farrow & Ball’s French Gray, a color that reads more sage green. In lieu of a traditional island, he opted for a reclaimed counter-height table he had built in Pennsylvania’s Amish Country.

A set of steel French doors lead from the dining area to the backyard. “I felt it was a statement, but one that would really add value,” says Feirstein. He offset this and other splurges (we’re looking at you, La Cornue range) with serious budget finds, including $20 Target balloon shades on every window and a copper sink from Etsy in the powder room, retrofitted to sit on top of a vintage console he picked up at a local store.

Other design decisions in the bathrooms came down to availability—due to COVID, there was a material shortage. The downstairs guest bath ended up with green-black zellige tile in the shower, while the primary bath got a light gray mosaic. “I wanted the guest suite to feel separate,” notes Feirstein. Butter-hued beadboard walls and unlacquered brass fixtures offset the moody stall; the adjoining bedroom’s palette is a play on the same colors, only flipped. Upstairs, cooler-toned nickel hardware and white paneling feels similar but airier.

“A lot of sleep was lost over the wall treatment,” says Feirstein of the wainscoting, shiplap, and board-and-batten details. It runs halfway up the walls in some rooms. In others, it’s applied overhead. In the cavernous main bedroom, though, it stretches floor to ceiling, disguising awkward rooflines and bringing a sense of history to the new addition. A built-in bench, also paneled, is a cozy spot for breakfast—and cleverly hides ductwork. With all of these updates, Feirstein was able to almost double the property value in just two years.

But the best surprise in the house is the smallest: a Narnia-esque nook in the back of a closet. “Just as in The Lion, the Witch and the Wardrobe, you go through a fortress,” says Bowen. “It’s like a magical hideaway.”

Best source for plants and gardening supplies: Marders in Bridgehampton.