Plus, the do-it-all sink that adds extra prep space. 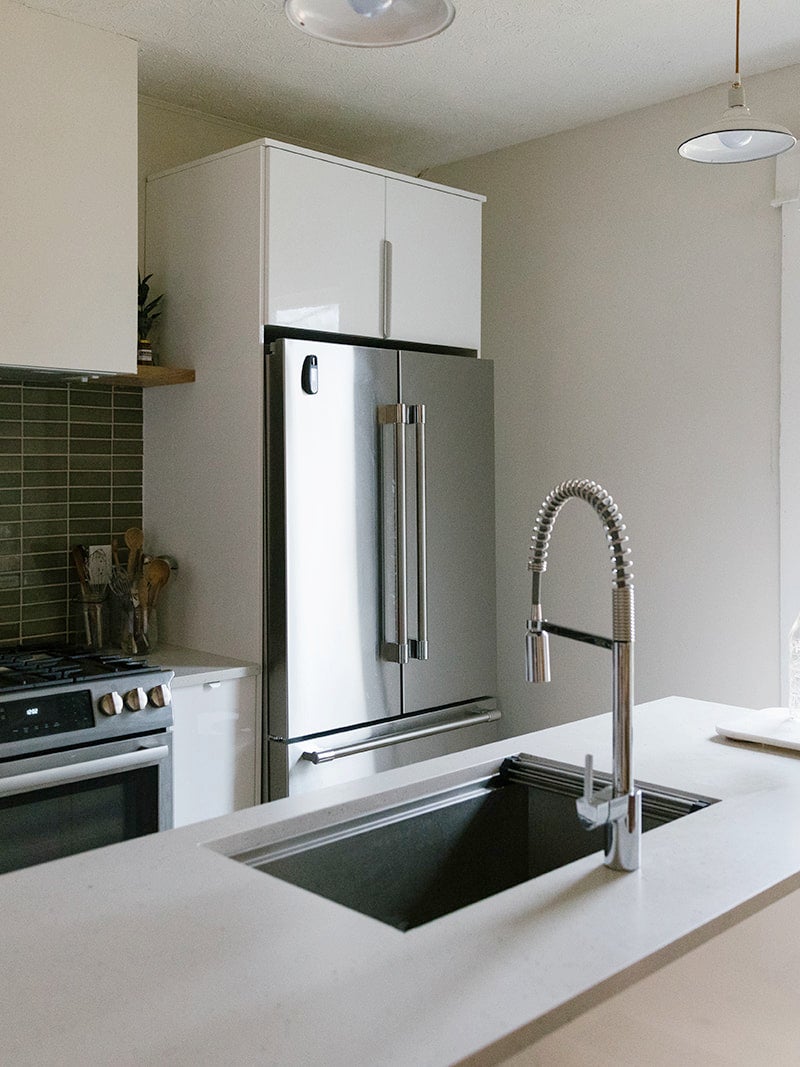 Before Domino’s deputy commerce editor, Samantha Weiss-Hills, and her husband, Alex, closed on their Bloomington, Indiana, home in 2017, they already had an email chain going with their architect. In exchange for $5,000, Andrew Heathfield helped the couple mock up plans for their long-awaited renovation (they had been living in the untouched rental for more than a year at that point), which included a near-complete overhaul of the kitchen. Then Sam called up her contractor father to take the lead on the transformation. He built a range hood out of 2-by-4s, installed their Bosch dishwasher, and even bloodied a finger while hanging the sliding door leading to the new dining area, but never without a smile on his face. “My dad has been doing this forever, so it was fun to watch him,” she says.

Storage was paramount for the couple: they love to entertain, plus Sam was working for Food52 at the time, so she was constantly testing new recipes and gadgets. Not having to stress over labor costs freed up the budget for most of their must-have items. Ahead, she takes us behind the scenes of her clever kitchen renovation.

At first, Sam questioned whether shiny white cupboards from IKEA were the correct fit aesthetically for her circa-1900s bungalow, but she was convinced it was the right move after she heard artist and designer Maya Schindler rave about how easy it is to wipe down hers. Plus the inner workings of the Swedish brand’s units are easily modified—the one closest to the breakfast bar serves as the pantry. “I’m a massive fan of drawers,” Sam says. “Then you’re not digging through everything constantly.” The cabinets in the dining room hold so much more than extra cookware: They’re a place to store records, rarely used china, and dog food. “It’s a catchall,” she notes. Refreshing the storage in both rooms came to a cool $10,000.

Dropping a proper island in the center of the kitchen offered an opportunity to play appliance Tetris. First off, it provided a more sensible location for their new stainless steel dishwasher and $500 Ruvati sink (complete with cutting board, garbage disposal, drying rack, and strainer). With those bits and bobs out of the way, Sam and Alex could shift the refrigerator and the oven to the main wall, resulting in the ever-sought-after work triangle.

The only demolition that took place involved widening the doorframe to what was previously the guest bedroom (now the dining room). “It was a really hard pinch point,” recalls Sam. Heathfield tasked custom fabricator Central Scenic with creating a sliding door made from polycarbonate and powder-coated steel that, when Sam and Alex desired, could separate the area from the kitchen. When guests come to stay, the room acts as the ultimate flex space. “We opted for soft close, so it never slams,” adds Sam.

The engineered hardwood flooring came in at—wait for it!—$200. It was luck, really, that their local shop was having a sidewalk sale: They were able to scoop up hundreds of square feet of flooring for practically nothing. A save like this left room in the budget for the splurge-worthy Heath backsplash tile (20 square feet cost $525). “We wanted to bring a little bit of warmth in, given it’s a bungalow,” shares Sam.

Sam and Alex did some experimenting before ultimately landing on Caesarstone’s Frozen Tundra ($4,700) for their countertops. To see which material could handle the ingredients they like to cook with, they ordered four samples and splattered them with turmeric, coffee, and tomato paste, then washed the surfaces. Still in need of some bonus counter space, the couple topped a $300 wire cubby unit with a slab of butcher block. “It’s so heavy now that it doesn’t even move,” says Sam. “And it made it feel really cohesive [with the shelves].”

The pegboard, also fabricated by Central Scenic, is chicer than your typical hardware store find: It’s stained an almost golden hue and features a streamlined miter edge. The catch the couple discovered too late? The bespoke design didn’t account for traditional peg-hook dimensions. “They were too thick; they wouldn’t go all the way on,” Sam recalls. Her fix was to buy the screw-in kind, but she still had to hammer each individual one’s back so they would adhere properly.

It’s the little details like outlet placement that make a kitchen reno go round. Having plugs on each side of the stove proved to be a game changer for Sam and Alex want to quickly use a stand mixer or blender. She also strategically placed one on the island and another at the coffee bar—because whether you need to get through the workday or construction, caffeine is crucial.