It was built entirely from scratch. 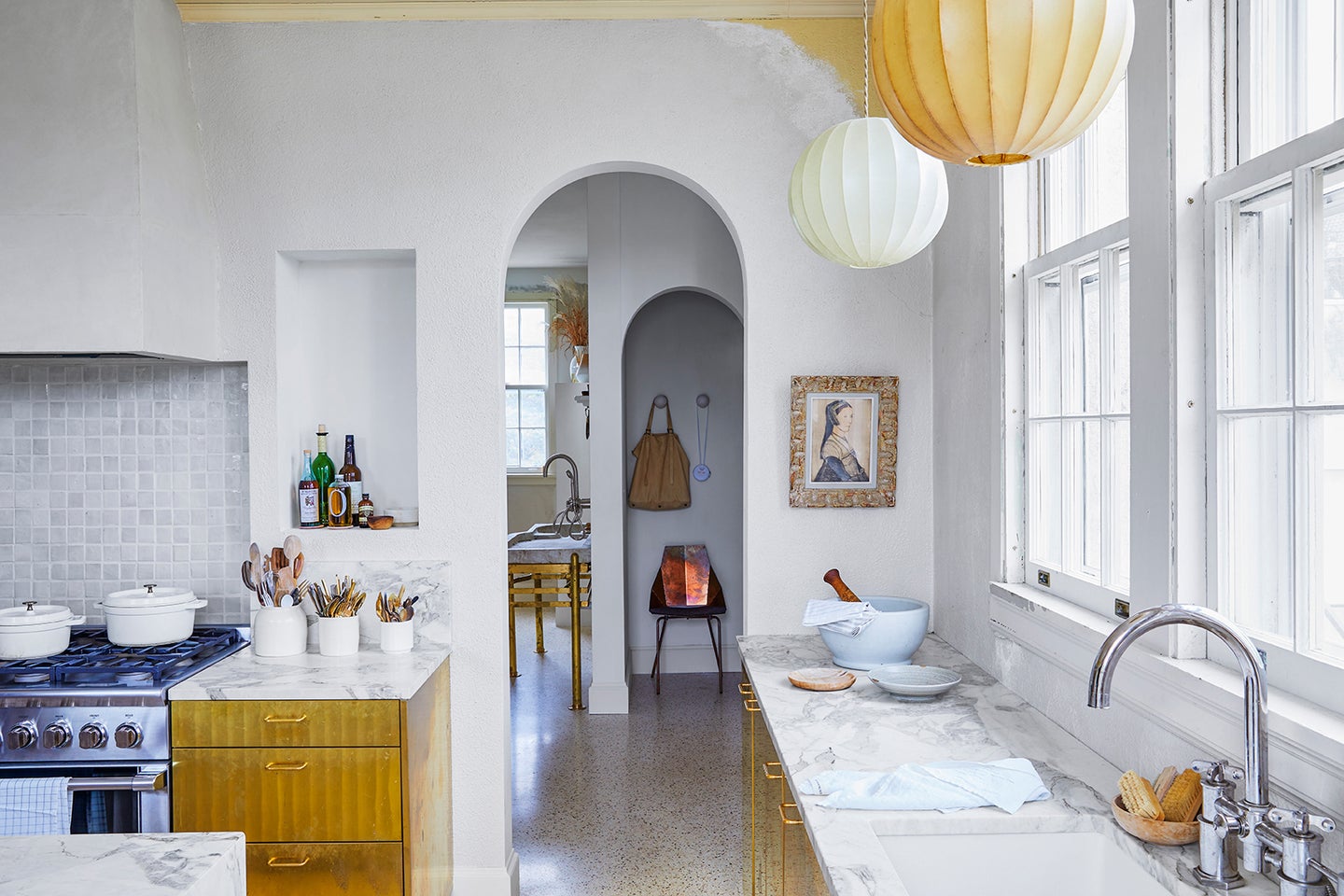 When Liz Gardner and Josef Harris host parties in their historic Minneapolis home, the “humble ballroom” that serves as their dining room takes center stage. But their kitchen, with its gold-tone metal cabinets and expanse of marble counter space, deserves serious recognition for its supporting role.

The 4,000-square-foot, three-story neoclassical building had been carved into a warren of smaller rooms and office spaces in its 100-year lifetime, and was limping along by the time the couple purchased it in 2017. Though their budget was limited, their Midwestern ingenuity and their appreciation of raw, unfinished details proved to be just what the house, which Gardner describes as “a lady that needed to be listened to,” needed. As they stripped away linoleum and ancient wallpaper, she seemed to sigh with relief.

They chose the third floor for their living space, and the lower two floors as their offices and a multipurpose area for events and installations for their multidisciplinary creative studio, Bodega Ltd. Oddly, the existing structure was somehow stripped of its kitchen, so Gardner and Harris had the luxury (and the challenging task) of building one from scratch. They chose a former dining room as the ideal spot, because it had “the most beautiful light at all times of day,” a real commodity during Minnesota’s colder months. On the flip side, it had layers of carpet, drop ceilings, and “a lot of very sad suspended fluorescent lights,” Gardner says.

Once the practical decisions were made—double dishwashing drawers to handle the load from their massive dinner events, a prep space with a large 1920s garden sink, and a trough that functions as a spot to cut and arrange flowers or drinks—they were able to focus on more dramatic touches, like the brass-front cabinets that practically glow in the sun. “We chose a lot of ‘living finishes,’ things that will age as they are used,” she says. “The brass will only get better with time.”

The result is a marriage of modern and classic. “Liz has a few design philosophies that have been a rudder through the renovation,” Harris says. “One of them was to maintain a sense of time—especially with the materials. Marble, terrazzo, unlacquered brass, nickel, limestone plaster—all of these finishes feel age-appropriate.”

And they say that sticking to a budget ended up helping them in the end. “If we had every dollar in the world to do everything we wanted, we wouldn’t have the same connection to the space,” says Harris. “Now it’s richer in a different way that can’t be replicated.”

More Before & Afters: We Transformed an Old Porch Into a Laundry Room for $6K Almost Half of Our $16K Exterior Remodel Budget Went to Painting the Fence I Spent 5 Years Painstakingly Restoring My 1850s Victorian