Sandpaper (and a Lot of Patience) Transformed This Dark Victorian Home 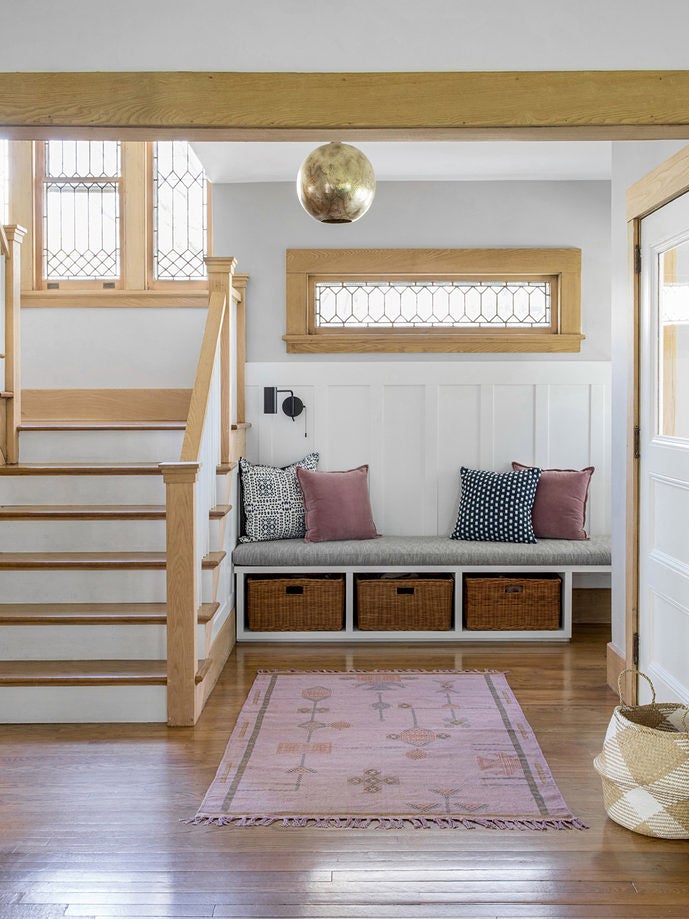 Without a doubt, the original woodwork was the greatest feature in this turn-of-the-century Victorian home in Maplewood, New Jersey. Throughout the first floor were exposed ceiling beams, window frames, and door casings, all made out of now-extinct (and highly desirable!) American chestnut. But when Julie China, partner at Idea Space, was tasked with renovating the house, she noticed one major problem: All of the gorgeous details were stained dark brown, which made the rooms feel claustrophobic and heavy.

Luckily, the designer had multiple projects under her belt dealing with reclaimed materials. She had no doubt that preserving the coveted chestnut was the right choice, but she wanted to make it more palatable for 2019 taste. Paint was also out of the question. “There’s a level of guilt that goes along with covering natural wood,” she says. With the goal of transforming the home into a brighter space, while still retaining its century-old charm, she tasked her contractor with the not-insignificant job of stripping the woodwork throughout.

“The poor guys who did it,” remembers the owner. “There was a ton of dust. It was a hard job. But they were really into it because they were uncovering all this great wood.” To make sure the process resulted in a color that everyone was happy with, the contractor first stripped a sample piece by hand-sanding it to see the end result. He suggested applying a flat, colorless polyurethane post-sanding to keep the chestnut looking fresh for decades to come.

While China did end up removing some vertical chestnut slats from the dining room wall, they were put to good use in the end. “We used them in the powder room as wainscoting,” she says. “I think it is really cool that we were able to repurpose that.”

The designer also opted not to smooth out any imperfections on the beams from former door hinges or nail marks. “We didn’t repair anything,” the homeowner says. “The wood itself is exactly the way it was.” The whole process cost around $15,000 and took about four weeks, while the rest of the home underwent a full renovation. But the end result was worth it: Without compromising on character, the rooms now feel airy and bright.

Discover more kitchens we love: An Unpopular Tile Inspired This Old-Meets-New Brooklyn Kitchen This Tiny, Windowless Kitchen Feels Worlds Away From Foggy London This Kitchen Reno Will Have You Adding a Wall Cutout to Your Wish List