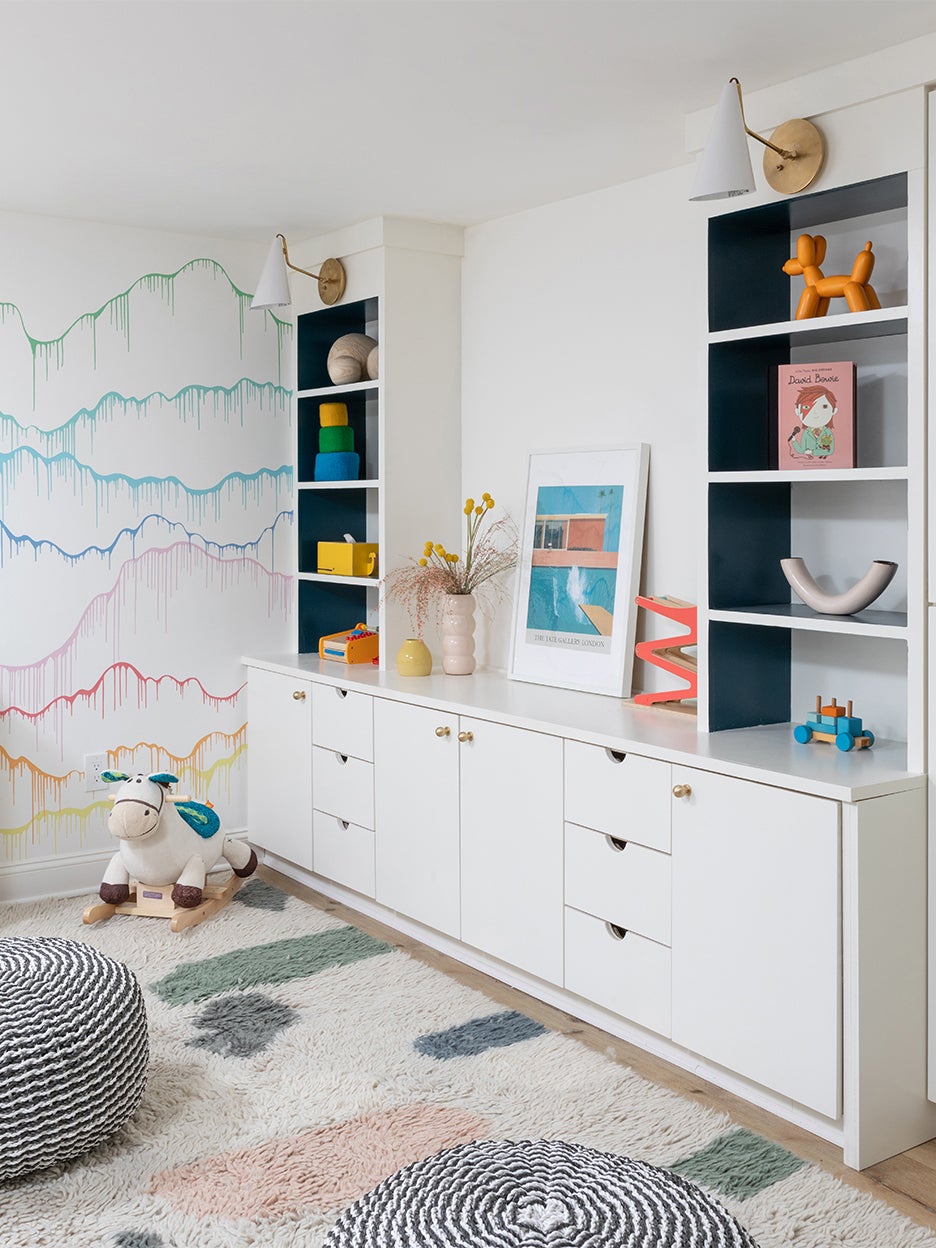 Before designer Christina Kim entered the picture, her client’s basement was 900 square feet of beige walls. “It was the kind of place you throw old furniture you’re not ready to part with,” she explains. The young Manasquan, New Jersey–based couple, whose now 2-year-old was just a newborn at the time they met with Kim, tasked her with turning the bonus area into a hangout space, complete with a dark and moody media zone–slash–wet bar and a bright playroom separated by sliding glass doors. “There’s a clear definition between the two, with a line of sight for supervision,” notes the designer.

Now “finished to the nines,” says Kim, the basement is primed for family movie nights and big games. In addition to being high contrast, the area is a mix of high-low details: Picture-frame molding, a black granite sink, and vinyl flooring only look expensive, while the grasscloth wallpaper in the hallway, articulating sconces (they turn any corner into a reading nook), and gold Buster and Punch light switches were well-worth-it splurges. Ahead, the designer reveals how she claimed this extra space back for the family of three.

Let There Be Darkness 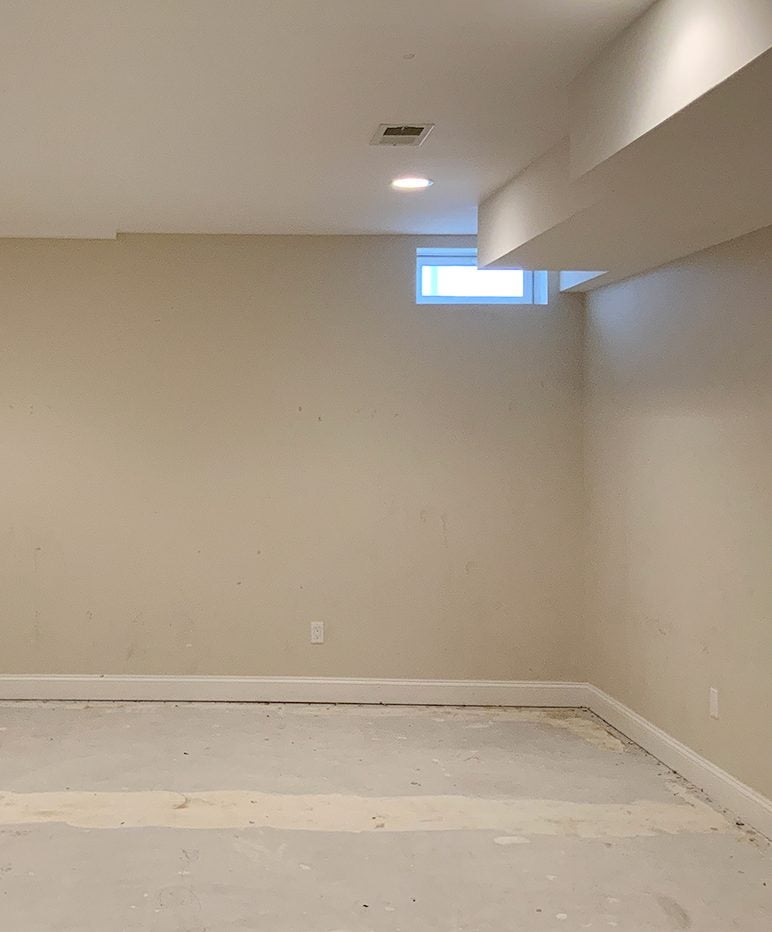 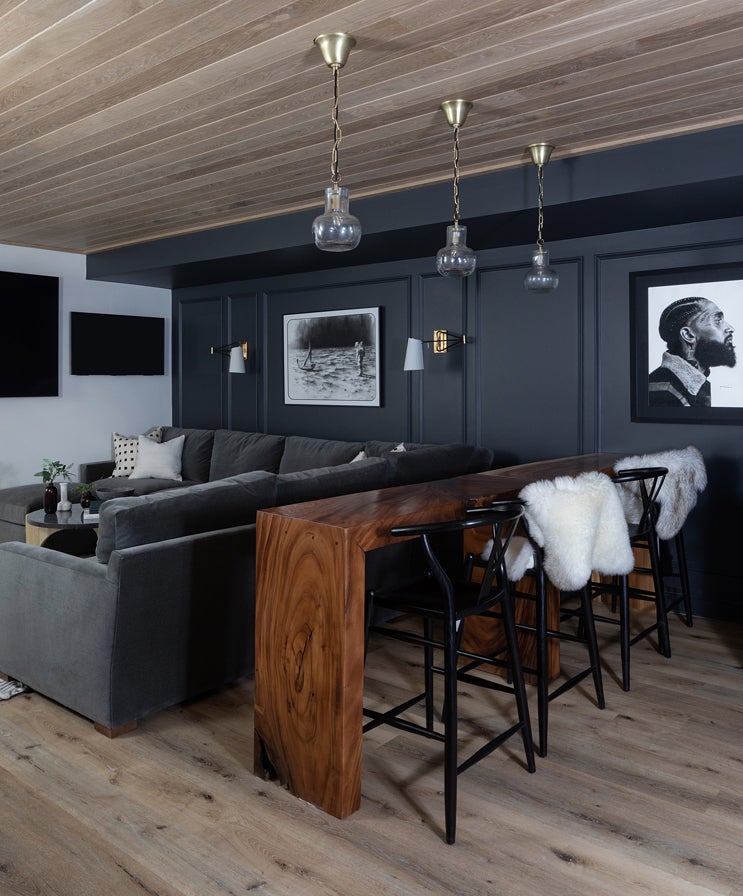 Right off the bat, Kim ran into a typical basement challenge: lack of natural light. Rather than fight it, she leaned into it and even covered up a tiny awkward window in the media area that was causing an awful glare on the three (!) wall TVs (there’s also a big movie screen across from the couch). The result? “When you open the door to go down, it really feels like you’ve turned the house upside down,” she says, noting that the rest of the home’s aesthetic is beachy and breezy. “It’s a totally different vibe.”

The lack of sunshine made picking the perfect shade of black paint for the walls in the media space a bit trickier than usual. After testing samples, Kim figured out that the tone had to be softer, similar to the charcoal velvet sofa, and have a hint of navy in it so it didn’t look so stark. Her pick: Benjamin Moore’s Wrought Iron. 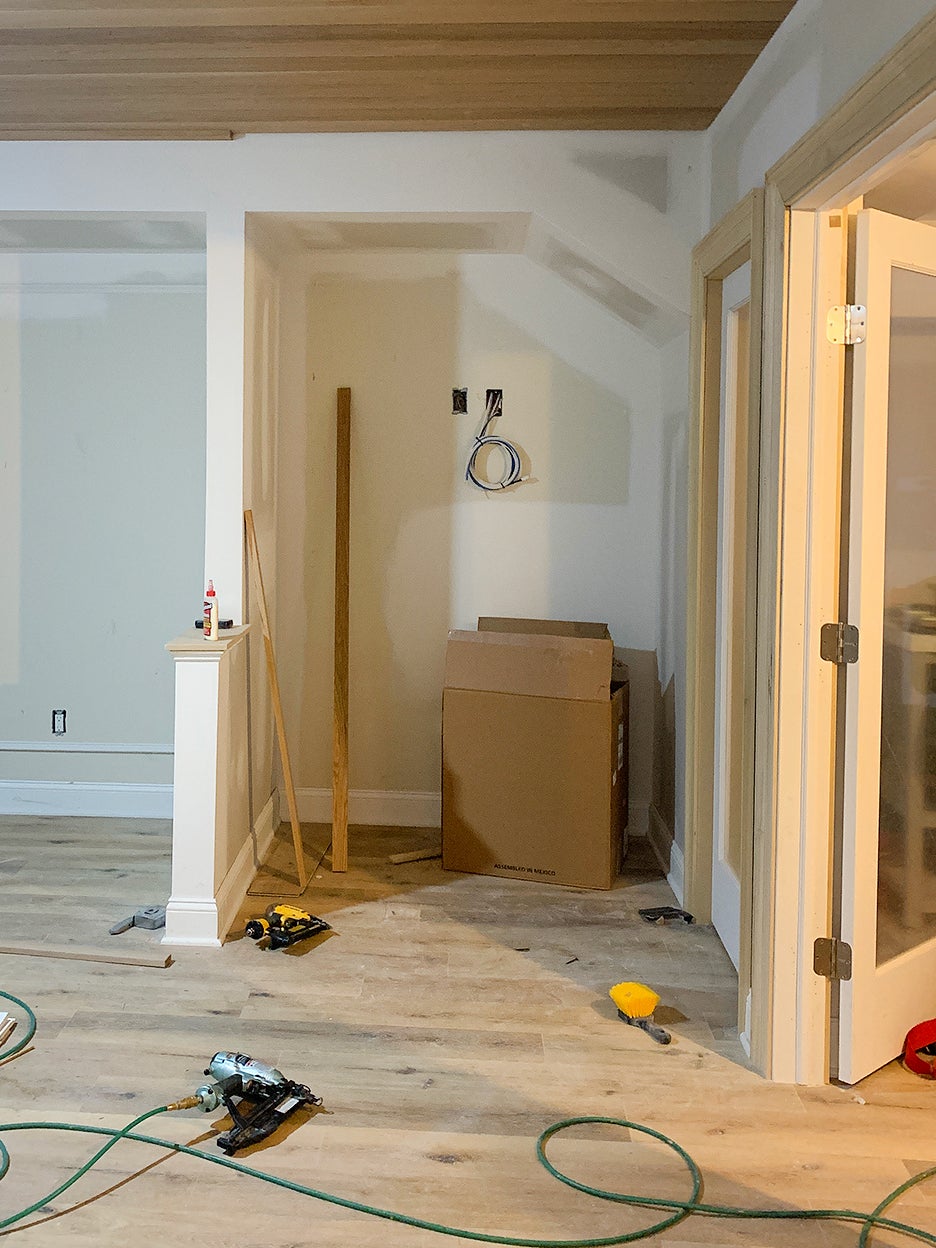 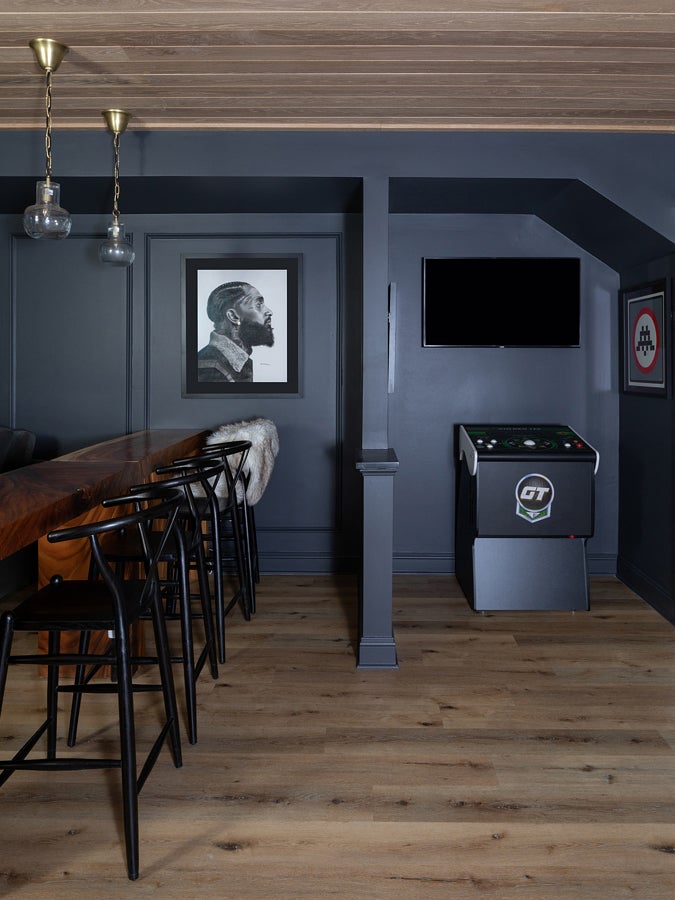 While the designer tried to eliminate the soffits where possible to gain ceiling height (a whole 8 inches, to be exact), there was one deep one that she couldn’t ditch. Her solution: Make it look purposeful by turning it into an arcade nook. “It’s the husband’s favorite spot to unwind and perch a drink while he plays,” says Kim. Turning the negative into a positive also spared the budget. 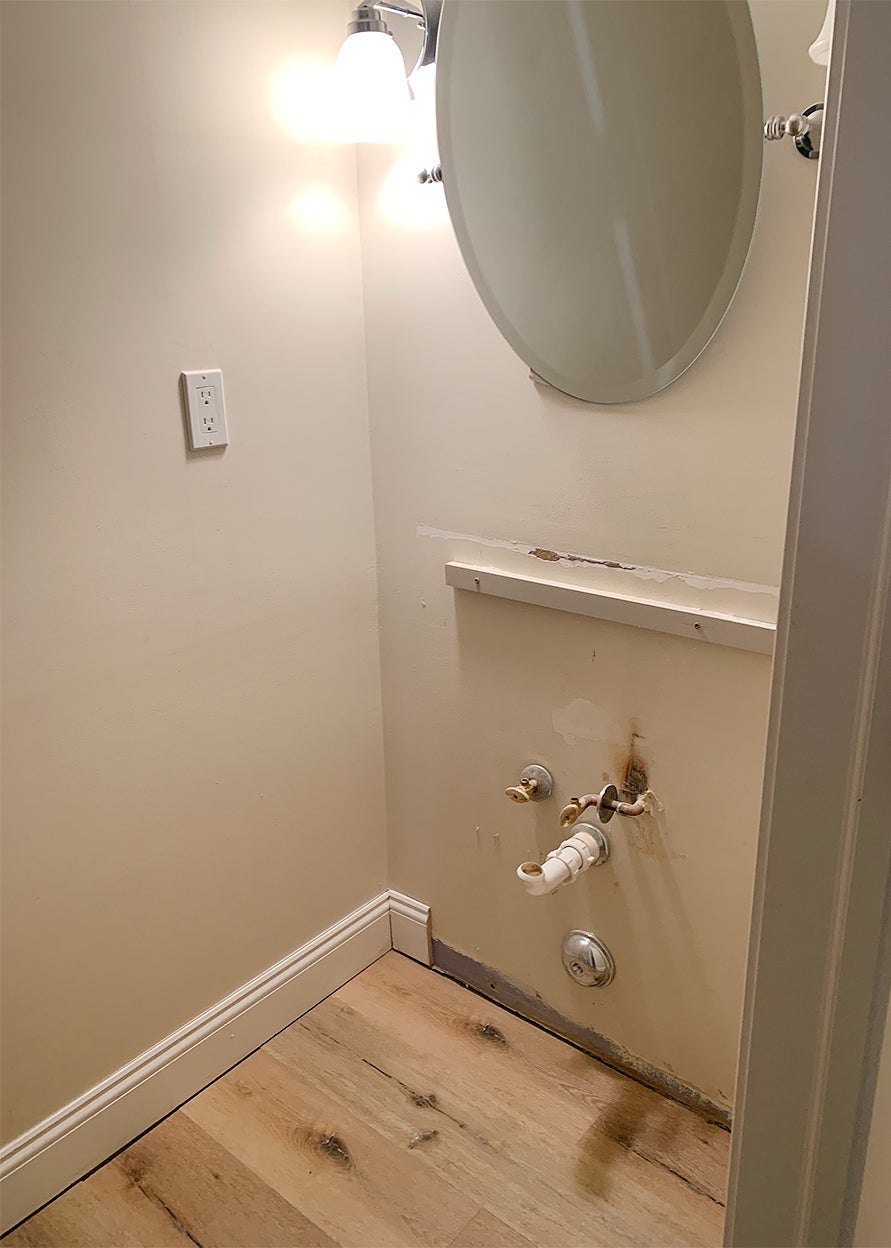 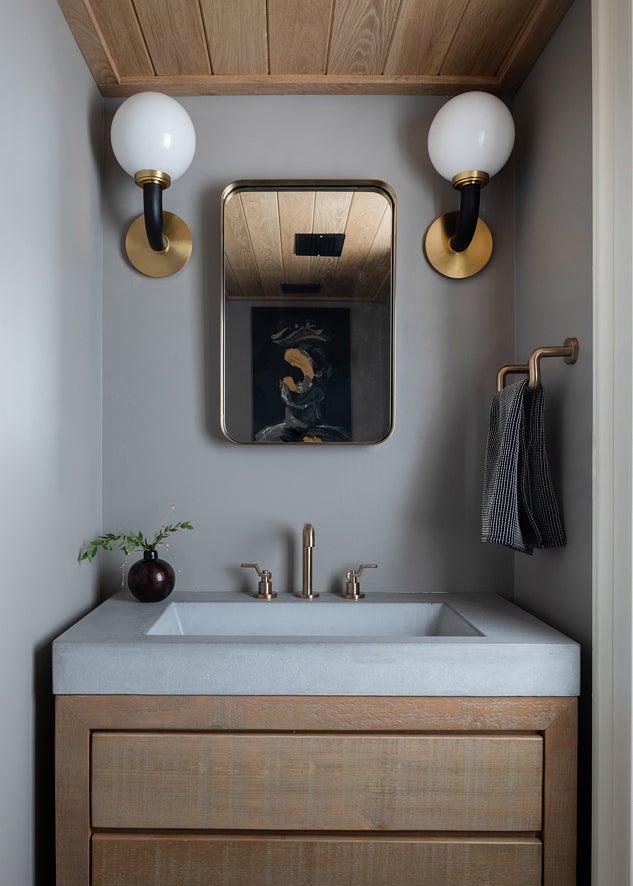 Bye-bye, ugly popcorn ceiling; hello, tongue-and-groove planks. Before installing the boards (they run perpendicular to the joists, so there’s something to nail them to), Kim’s contractor, Finished Basements NJ, was careful to measure and cut out any spots where they’d encounter the grid of recessed lights. Other than that, incorporating the extra wood detail was a breeze. “Leaving them unfinished achieves a warm, modern look, which is totally okay in a space as casual as a basement,” says the designer.

Flip Your Palette to Be Kid-Friendly

The playroom is a far departure from the very-much-unfinished, utilitarian storage room it once was. Going with a total fresh palette in this space was a no-brainer, explains Kim. “I couldn’t picture a baby playing in the dark,” she says, laughing. “Just couldn’t do it.” So she bathed her in light and even kept the one tiny window in the room. As for the walls, those got a crisp coat of Benjamin Moore’s Simply White, with the exception of one that showcases a painterly rainbow mural landscape by Rebel Walls.

The built-ins don’t house typical basement storage (i.e., holiday decorations), but rather toys, crafts, and books. Itty-bitty playthings like Legos can be contained behind closed doors “so there’s not much visual overstimulation,” notes the designer. But for a little bit of eye candy, Kim swathed the inside of the open shelves in a dark teal hue. “We originally planned on black, but we found that this still provided a lot of contrast, though in a happier way,” she says. You won’t find any throwaway furniture here—just good vibes only.