And a seriously chic pantry hiding behind closed doors. 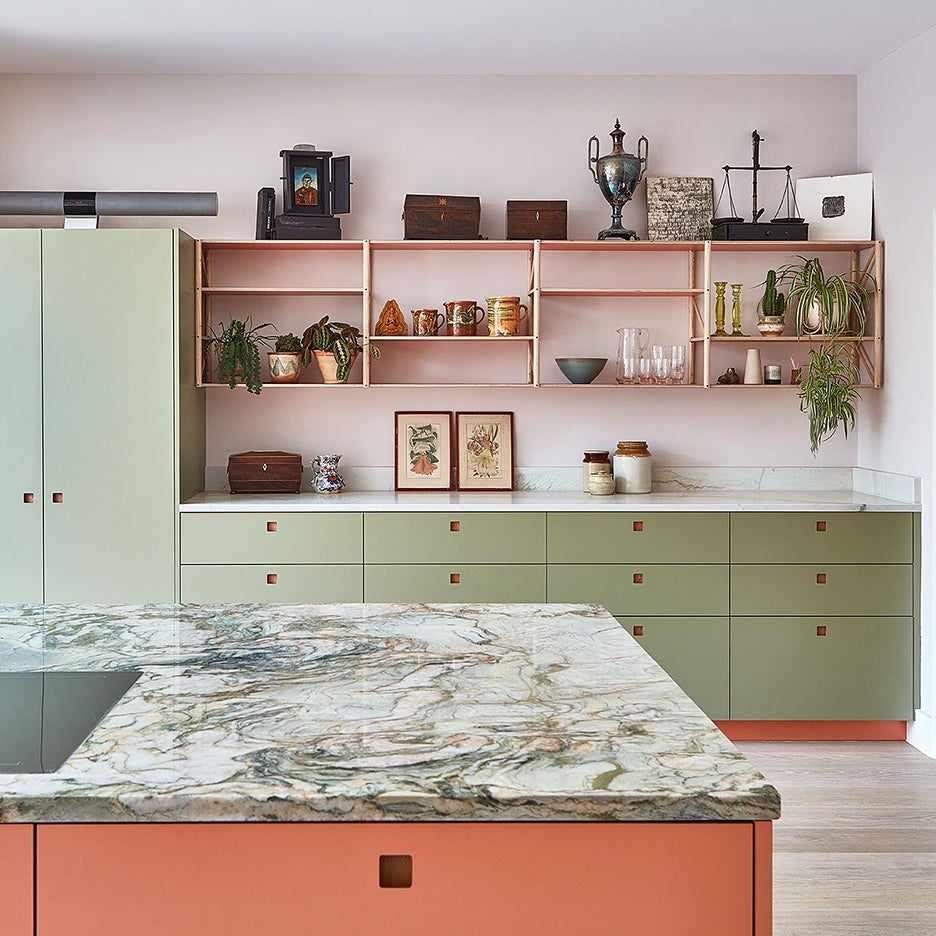 “Every piece in a kitchen is furniture in its own right and deserves to be constructed as well as everything else in a home,” declares Pluck cofounder George Glasier. When it comes to cooking spaces, the designer has a type: ones “very mindful of materials, with quality running through, and an immense attention to detail,” he says. His latest project, for a London couple wishing to revamp the dull, traditional kitchen in their semi-detached Arts and Crafts home, checks off all those boxes and then some.

While they were initially unsure of Glasier’s bold palette choice—soft sage and punchy coral—the result is both a visual treat and highly practical, centered around a quartzite-clad island and Victorian-inspired open shelving. Read on for a closer look at the candy-colored details.

Simple Doesn’t Have to Mean Boring

Despite lots of thoughtful extras—ergonomic cutout reset handles that don’t take away from the cabinetry, custom birch plywood cabinet sizes for a perfect fit, contrasting skirting below the green cupboards—“it’s a fresh, clean, and uncomplicated kitchen,” say the homeowners. The standout moment is hidden from view behind what looks like all the other doors: the pantry, a Pluck signature and Glaiser’s “little moment of showing off.” Doweled door racks placed at varying heights easily house tall bottles of vinegar and squat spice jars alike, while a stack of drawers doubles as a shelf for everyday essentials. “There’s huge joy in opening the double doors; it’s this grand gesture,” says Glasier.

In order to avoid any dead zones, Glasier made the island the hub of the room, with Brazilian quartzite, a natural stone that’s more durable than marble but just as dramatic (just make sure to seal it). Its high-contrast veining pops even more given the surrounding counters are a simple Bianco Macaubas granite. “On one side you have the practical center of cooking, which looks out to the dining room and garden, then a bookshelf, to soften one end of the island, and open shelving, which is a lovely transition,” he explains.

The ledges, whose diagonal pole supports are inspired by Victorian bamboo furniture, make up the “anti-trendy” floating shelves. “We find floating shelves can easily feel like an afterthought,” says Glaiser. This system, on the other hand, is almost like art, with an ash frame and laminate shelves that match the island. The juicy hue also happens to be a rich backdrop for the couple’s Spanish artwork, inlaid wood tea cubbies, and weighing scale.

When in Doubt, Put a Spin on the Traditional

While the couple always knew they wanted to go with green for their kitchen, they were keen to choose a paler, yellower laminate. But Glaiser pushed them toward Pluck’s Brockwell Moss, a shade with gray undertones, and Ritzy, a peachy pink, for a tried-and-true contrast—they sit on opposite ends of the color wheel as close cousins of basic red and green. “While the colors in this kitchen are bold, they also follow the classic rules of color theory,” says Glaiser. “That’s why the combination works.”