And a new way to mix countertops. 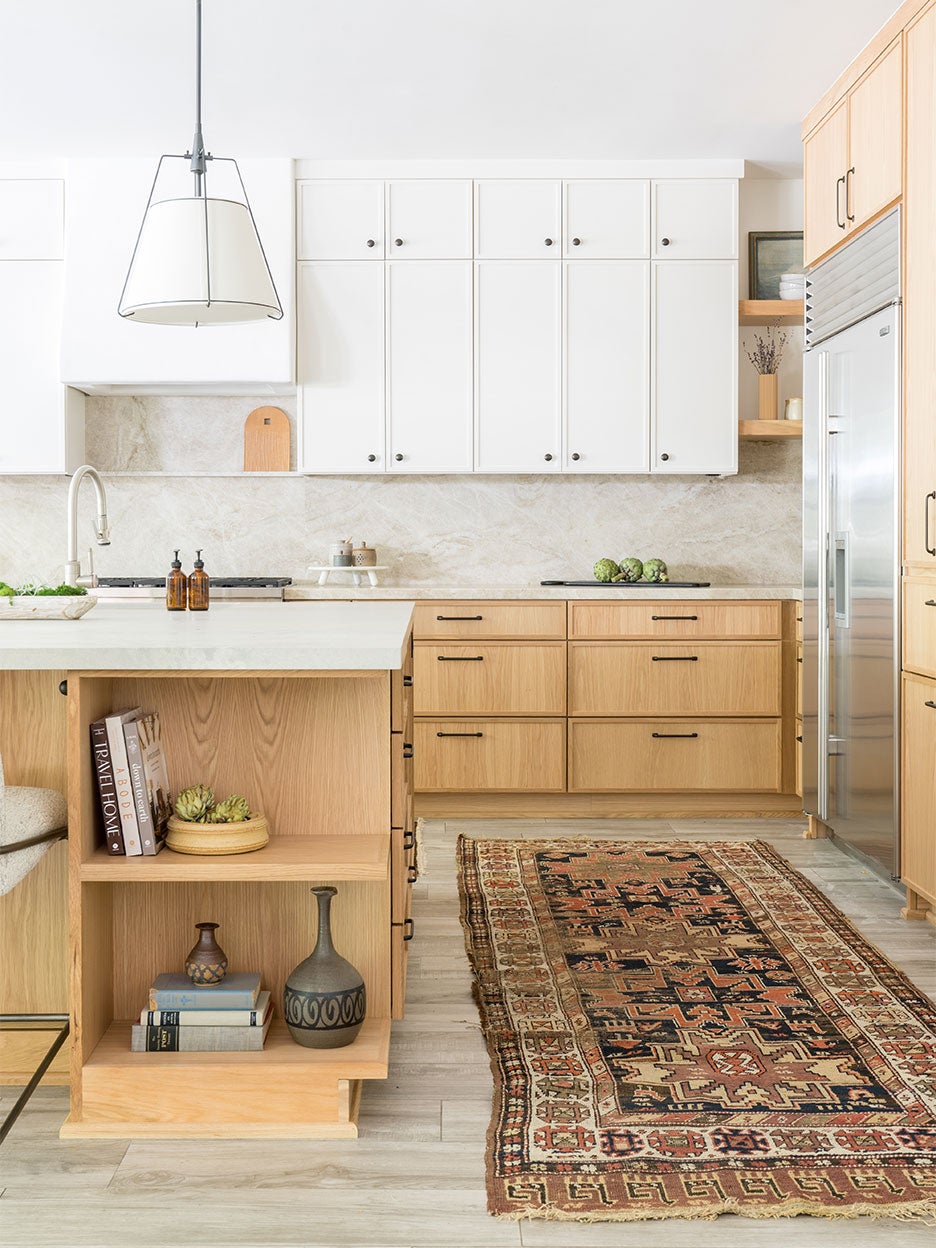 When renovating a client’s 500-square-foot kitchen in Carlsbad, California, designer Abbie Naber didn’t just have to think about who would be cooking in the new space—she had to consider who’d be cleaning up. “The homeowners have three boys, two of whom do the dishes every night,” she says. Naber imagined how their belt buckles might brush up against the apron sink and the likelihood of hot pans sitting out on the countertop. “Durability became the name of the game,” says Naber of her material choices.

The designer landed on a hardy Taj Mahal quartzite for the majority of the countertops and the backsplash. The natural stone is heat- and scratch-resistant (unlike etch-prone marble). “It feels like it’s been worn down and doesn’t have that sheen that can sometimes be polarizing,” Naber says of its leathered finish. Then, at her client’s request for a layered room, she made the nerve-racking decision to cover the island in a different—and man-made—stone. Would they clash? Would they compete? She walks us through how she found the perfect balance.

The tricky part about picking a countertop for an island is that the surface is so large. You’re almost always going to need to combine two slabs, meaning there will be a seam down the center. A natural stone, like the quartzite Naber used throughout the rest of the space, has a lot more variance, so there’s no knowing whether the veins will line up when you put two pieces next to each other. However, repetition is a lot easier to control with a manufactured surface and the seam is less noticeable. This, ultimately, was the reason the designer went with a Caesarstone Primoria quartz for the island.

While most people might assume quartz is bulletproof because it’s engineered, quartzite can actually handle more wear, making it an ideal choice for the prep area. The hardworking surface will cost you, though (Naber estimates $70 to $200 per square foot, installed). “They have to transform the quartzite at the quarry into a slab,” she explains. The silver lining? Any leftover chunks from your project can be used to make little shelves for spices and cutting boards.

Take Your Storage Up to the Ceiling

One way the builders cut costs in the original kitchen was by making the upper cabinets shorter than they could be, leaving a gap. “It’s one of my pet peeves,” says Naber. “I swear in the ’80s my mom used to put porcelain figurines up there.” The designer gutted the old cherry cupboards and replaced them with new white oak ones that extend nearly all the way to the ceiling (there’s a small scribe molding at the top). The feature visually elongates the room, but it also offers usable space for storing seasonal items. Rather than go with traditional Shaker fronts, the designer opted for a thinner, three-quarter-inch frame. “It gives it a Scandinavian vibe,” she says, pointing out that the updated style might soon take off (Sarah Sherman Samuel recently designed something similar for Semihandmade).

Square Off the Island

The old curved island offered bar-height seating but not much else. “The pendants didn’t even line up and the edge was running close to their youngest son’s head,” she recalls. Naber gutted the structure and had a new one built with open shelves and appliance drawers galore.

Add Paint to Your Sealer

When left untouched, natural white oakwood has a beautiful, raw appearance. The issue is, sealing it is unavoidable in a kitchen, and once you do, the wood turns a honey yellow hue. Luckily, after scouring the Internet, Naber uncovered a solution: You can neutralize the sealant by mixing in a dash of white paint. “How much white you mix in is all trial and error,” she says. The designer broke up the repetitiveness of the plain wood by painting one wall of upper cupboards a bright white and covering the shell around the new hood insert in plaster.

Don’t Rip Up the Floors Just Yet

Didn’t catch that the floors are exactly the same as they were before? It’s impressive how a few key changes (new counters, new cabinets) can change the look of a space. The gray planks look instantly brighter next to white oak and now tie in nicely with the original stainless steel appliances. “I didn’t overthink it,” says Naber. “If it ain’t broke, don’t fix it.”