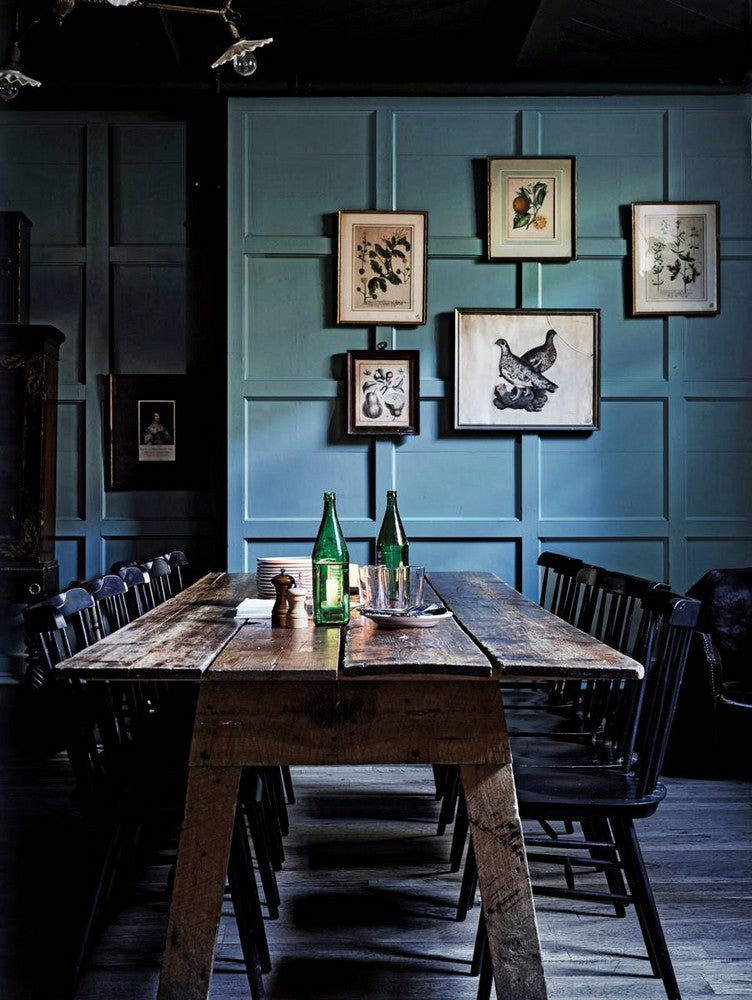 is the creative mastermind behind some of New York’s best-loved restaurants and watering holes—from Freemans to the freshly minted Le Turtle. We take a peek inside his new book for design inspiration and recipe ideas, like the famed artichoke dip.

of separation from making it myself,” says Taavo Somer, referring to his up-close-and-personal approach to designing and building a space, whether a salty waterfront dive bar or a spruced-up men’s clothing shop. It’s a rare combo of talents—dreaming up ideas and putting them into action—that’s created an eclectic mini empire of dining, drinking, and lifestyle spots scattered across lower Manhattan, each with real character and charm. In October, Somer launches Freemans, a book covering more than a decade of his work, including essays on design, interiors, and style, as well as a handful of favorite recipes.

This approach extends to the stone house in upstate New York that he and his wife, Courtney (domino editor at large), have slowly restored—which, he adds with a chuckle, might be a little too sparse for her taste. “I was a minimalist as a kid, but at some point I had to rebel against my Scandinavian parents!” Somer says of his penchant for (expertly) layering on decorative elements, like the oft-imitated taxidermy at Freemans and the worldly pieces at Gemma. In a way, paring down to a cleaner aesthetic for his new venture, the modern French eatery Le Turtle, is a return to his roots. (His architecture school thesis was on developing Chrystie Street in the East Village, precisely where Le Turtle is located.) And if Somer makes it, people are sure to come.

Sitting upstairs at Freemans, his first and (for now) best-known establishment, the designer and architect traces his hands-on ethics back to his Estonian parents, who designed and built their own home in Michigan. Crafting a distinct and authentic space largely comes down to the details, according to Somer, like stocking old-school European grooming products at the Freemans Barbershop, sourcing a jukebox with yacht rock for The Rusty Knot, and staining the oak-paneled walls at Gemma restaurant in the Bowery Hotel himself for just the right effect.

Somer’s spaces always feel warm and lived-in—like his take on a dive bar, The Rusty Knot, his own home in upstate New York , and Freemans —because you can sense that he had a hand in creating them.

The reclaimed pine flooring at Somer’s house in upstate New York (pictured here) was sourced from the same place as for the new Whitney Museum of American Art.

Another favorite, this dish has been on the menu since Freemans opened. The quantities depend on how many you want to serve; Somer recommends at least two pieces per person, although diners have been known to order a second (and third) plate at the restaurant.

“When I start working on a space, I don’t think of a color or a certain piece of furniture. I start with a story or a theme—the history of the place, perhaps, or a narrative I want to explore,” says Somer. “Like Method acting, there is Method design. Do the deep dive first (Who would live here? What is this space supposed to be?), then all of the elements fall into place.”

“When we started Freemans, I wanted to include this artichoke dip on the menu. Our first cook initially refused to make it; she wanted the dip to be fancier. But I insisted—and it’s always been our most popular dish,” Somer writes of the ultimate comfort side dish.