This New “It” Restaurant Is Like an Italian Vacation, But Better

Because you don't have to buy the plane ticket. 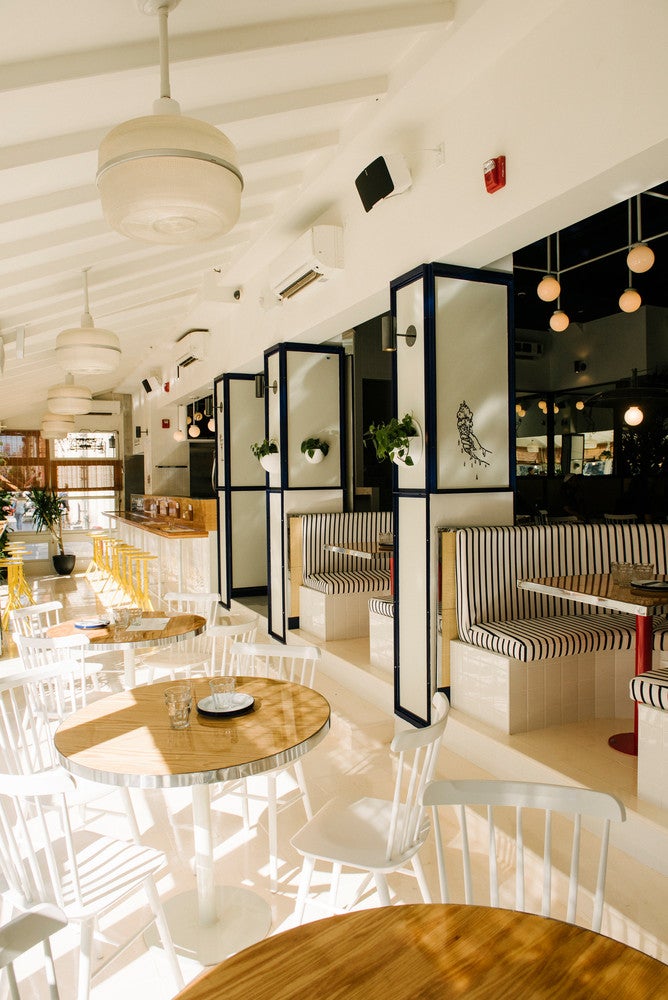 Matt Abramcyk knows that opposites attract. It was this very notion that inspired the restaurateur and longtime New Yorker’s latest venture. The diehard Tribecan, whose roster includes neighborhood hotspots like Smith & Mills, Yves, and Tiny’s & The Bar Upstairs, just opened two new eateries in downtown Manhattan: one a breezy, seafood-centric street café, the other an underground barbecue house. Foodies who want to wash down a dozen oysters before moving onto the real meat will be pleased to find that the two new “it” spots conveniently share the same coordinates.

“It’s really nice to invite people to an address where we have so much to offer. I think it’s a unique thing to have such a close partnership and identity as we do over there,” says Abramcyk of the dual-opening.

Inspired by warm days basking in the Mediterranean sunshine, A Summer Day Café is exactly how it sounds: bright, breezy, and peppered with nods to nautical living. SAVVY Studio was tasked with developing and executing the interiors at both of the restaurants.

“The core of the design developed out of the sidewalk café and this idea of being on the coast. You know, in New York, we’re on West Broadway, but there’s a conversation between what’s going on in the restaurant and what’s happening outside,” Abramcyk tells Domino of workshopping their vision for the space. “We kept coming back to the photography of Joel Meyerowitz. He has a great book called A Summer Day, which really inspired this idea of being a seaside restaurant, with West Broadway as our view of the ocean.”

Reminiscent of warmer months spent along the Amalfi Coast, the design team set out on capturing the spirit of the seaside with blond wood countertops, white and navy striped booths, sunny yellow bar stools, and custom metal work. Naturally, the restaurant’s large glass windows let light fill in the gaps.

“We created an image book that was really inspired a lot by post modern, minimalism, and simplistic maritime images,” says Abramcyk. “It’s a very minimalistic design footprint, but it gives off a great finished aesthetic.”

Instead of swathing the walls in art, delicate line drawings of familiar summer memories and characters grace the restaurant’s many mirrors and walls.

In the same way that the design of the space serves as a visual projection of the restaurant’s name, the menu similarly offers a gastronomic trip across the Atlantic. Standout dishes by executive chef Mike Matteo—like fritto misto, swordfish belly, roasted artichokes, and trout a la plancha—place an emphasis on coastal Italian fare. The restaurant’s cocktail selection (think refreshing libations and a strong wine program with a lot of rosé) is helmed by bar director Matt Hunter.

Summer bliss is never bad, but for when the mood strikes moody, there’s Holy Ground. Since first crossing each other’s paths over a decade ago at The Beatrice, Abramcyk and Franco had long gone back and forth about kick starting their own meat-focused destination.

“I’d always been trying to bug him to open a restaurant with me and now 10 years later, we’ve finally done it,” laughs Franco. “Ever since I started cooking barbeque, the goal was to always do a restaurant like this where it wasn’t a typical barbeque restaurant where you walked up to a counter and waited. Making this type of food is almost like an art form. I always thought it should be displayed in a better way.”

That better way is finally here, and it comes in the form of a chic underground outpost with roots that harken back to the mid-1700s.

Taking a cue from prohibition-era speakeasies and old-school taverns, the contemporary basement channels the same seductive energy one can only find in a classic NYC steakhouse. Decked out with velvet vintage wallpaper, dark mahogany wood, checkerboard floors, and rich leather booths, Holy Ground feels like a secret you know you should keep, but won’t.

“[Franco and I], being from New York, have a similar appreciation for what is New York, what makes New York, the texture of New York, and the types of places that we like to go to,” shares Abramcyk. “People always ask, ‘What is New York barbecue?’ New York is really a melting pot, so New York barbecue to us is smoked protein and smoked vegetables. We really tried to build a menu that has all of the best attributes of fundamentally American barbecue, but that’s also rounded out by International flavors.”

“There’s definitely a heavy emphasis on a smokey flavor,” notes Franco of the menu, which boasts a number of dishes displayed and torched tableside. His recommendation? Try the beef rib (“an impressive dish sliced off the bone”).

While A Summer Day Café and Holy Ground function as two totally independent entities, both spots make a conscious return to the mom-and-pop restaurant, now a rare find in a city that’s grown increasingly accustomed to Sweetgreens and Panera Breads. Top that neighborhood feel off with creative flavors and equally-imaginative design, and you’ve got your new weekend hangout.