Maxwell's Chophouse is neither masculine nor feminine—and that's the point. 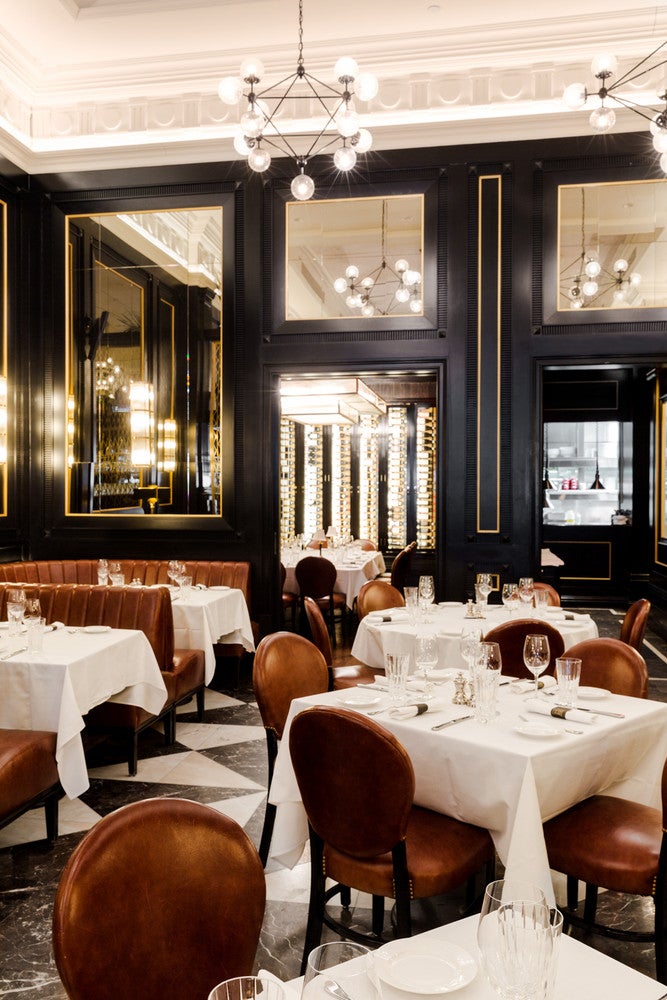 Ever imagine what it would be like to go into business with your mother? Melissa and Babette Haddad seem to have it to down to a science. After 25 years in the restaurant business, the two speak about Maxwell’s Chophouse with passion and pride.

“My mother always said that when she walked into the restaurant to work, it was like she was putting on a party. And although she doesn’t know these people, she wanted it to be feel that way. From their food and drinks to their table, service, and more, she always focused on the experience,” said Melissa Haddad.

And when you walk into Maxwell’s—which was recognized by the 2018 Michelin Guide (the publication described the restaurant as “an opulent and gilded steakhouse that instantly feels like a well-bred, New York classic”)—you immediately feel that attention to the experience. From the grand ceilings to the graphic black and white floor that inspired the rest of the design, the space exudes warmth, elegance, and sophistication, just as they intended.

After successfully owning and operating a restaurant with the same name in Boca Raton, Florida for 14 years, Babette and Melissa decided to take their successful working dynamic to another level by opening another, more upscale but inviting, Maxwell’s in New York. Opened in November of 2016, Maxwell’s Chophouse is one of, if not THE, only female-owned steakhouses in New York.

“We wanted this one to have a modern feel than the one in Boca,” said the two about the design. Though your eye may initially be drawn to the space’s high ceilings, its the black and white floor that sets the tone for the entire restaurant. And you can thank Babette’s keen eye for that.

She’s proud to have played a huge role in the design decisions behind the space, and the floor (inspired by The Wolseley in London) was the first thing on her list. Paired with with warm brown leather booths, lacquered black walls, and chic accents of gold, the grandiose space manages to feel welcoming, but still maintain that high-end steakhouse vibe.

“I wanted women to feel very comfortable coming into a steakhouse,” Babette tells Domino. “I didn’t want it to feel masculine, so I tried to go down the middle. It’s not masculine or feminine. It’s just warm, and that’s not easy with a 22-foot ceiling.”

“We love working together,” the duo tells Domino. “It’s an interesting combination that we’ve had going for a long time.” Babette and Melissa always make it a point for one of them to be on hand to interact with their customers. And it’s this family aspect that keep guests coming back.

In fact, with six children and 10 grandchildren herself, Babette encourages families to bring the kids. “I always brought my children out to eat. I think it’s an important learning curve for them growing up. We want people to feel like the whole family is welcome,” she says.

Maxwell’s transcends its genre of steakhouse to an upscale, family friendly joint that caters to all patrons—not to mention they have a killer menu, ranging from 40-day-dry-aged steaks and succulent sides to lighter lunch items, a killer avocado toast, delectable salads, and an impressive seafood selection (don’t sleep on the crab cakes).

“We came into it knowing what our menu was going to be large sizes and large steaks dry-aged in house, paired with delicious sides, but in a more modern setting so that any person would feel comfortable,” says Melissa.

And with comfort at the forefront, the Haddads want everyone to feel like they can walk through the door. As two female owners in the predominantly male world of steakhouses, they’ve had to work hard to earn respect. They have plenty of stories from the earlier days of patrons asking for their husbands simply out of disbelief that the two of them owned the establishment themselves.

But throughout it all, the mother-daughter pair has made it their commitment to create a space that feels luxurious yet accessible. At the end of the day, Babette and Melissa want you to come in and enjoy a delicious meal while taking in the beautiful, buzzing atmosphere (rumor has it, you may even be able to enjoy brunch here soon).

Here’s to the embodiment of girl power at its finest. We’re so here for it.