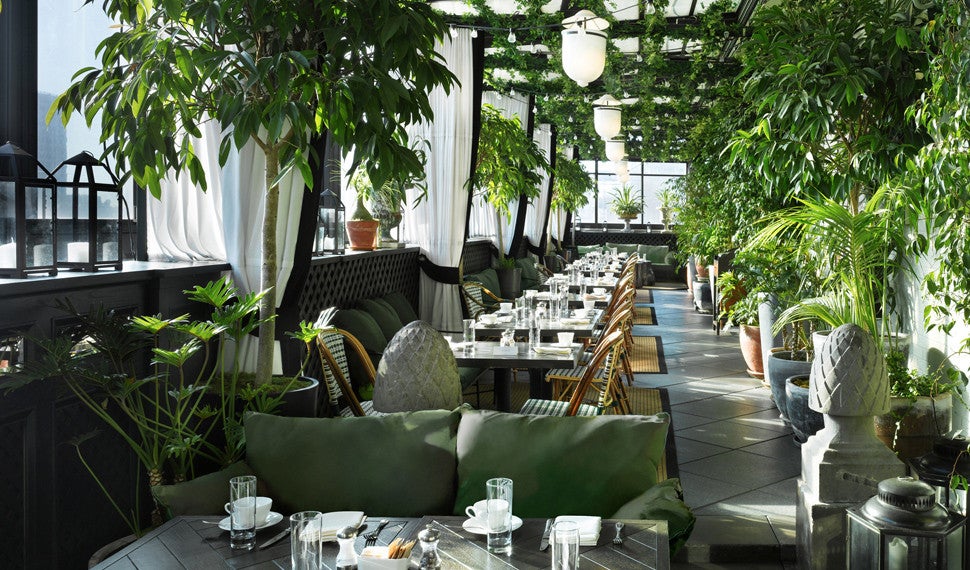 Photography by Gramercy Park Hotel
While the chefs might be the stars of restaurants these days, it’s the equally ‘gram-worthy interiors that always set the stage. It’s inevitably the design—right down to the smallest details—that sets the tone and completes the ambiance, be it simple and sleek, or light and luxurious.
Even more enchanting are restaurants that evoke the feeling of dining alfresco—think cocktails in a renovated greenhouse, or coffee in a treehouse-like cafe. And in New York, these lush, greenery filled spots are closer than you think.
Here, we’ve gathered some of the city’s most charming eateries, designed to also feel like indoor garden oases all year round. Check them out below.

It’s no surprise that the grande dame of New York City hotels also has the most incredible wraparound rooftop terrace (pictured above). The restaurant is a sunroom, a greenhouse, and a garden oasis all in one, decked out with big, leafy trees, garden topiaries, and string lights and lanterns.

Located on the 18th floor, the space is covered by a retractable roof that opens up during the spring and summer months, providing one of the best views of the Manhattan skyline.

When you walk into this plant-based eatery and juice bar, you’ll first notice the greenery filled corners and raw wood shelves filled with dripping ferns, ivy, and philodendron. The menu is 100 percent vegetarian, and changes each month to serve produce that’s most in season—but you’ll always get the best avocado toast.

It’s all the brainchild of veteran mixologist

(of cocktail bar Apothéke fame), who designed the light, open interiors, with a mix of industrial and earthy materials, for an atmosphere that’s both simple and inviting.

Like any worthwhile Parisian brasserie, Juliette features an unassuming facade. But don’t let that fool you, as the interiors and menu will transport you to another world.

The main room evokes a classic French bistro, with antique fixtures and furnishings, alongside charming collectibles and ephemera. And there’s a rooftop, too—with a bar—but it’s the sky lit garden room canopied by leafy greenery and trailing vines that’ll get your attention. It’s where you’ll want to grab a seat as you tuck into classic French fare, like crispy duck confit and croque monsieur.

You’re essentially dining in an elegant greenhouse when you take a table at NoMo Kitchen, which serves up seasonal farm to table dishes that combine rustic American fare (42 day aged ribeye) with Mediterranean influences (salmon crudo with Kalamata olives).

Bistro seats, terracotta planters and urns, and towering trees round out the sophisticated greenhouse vibe, but it’s the showstopping chandeliers—there are six of them—that make this spot simply magical.

Its namesake vine is a running theme throughout, and is most visibly seen across an entire wall, in a back room that’s reminiscent of an ivy-entwined terrace. It’s just like dining alfresco, but without worrying about the seasons.

If you’ve never dined in a treehouse, the House of Small Wonder gets you pretty close without the climb. Hidden behind a nondescript wood facade on a corner in Brooklyn, this tiny Japanese cafe is built around a giant tree in the middle of the space.

The decor is a mix of garden chairs and tables, glass terrariums, and potted plants hanging from wood beams. It brings to mind a mini treetop hideout—except here, you can also enjoy a green tea latte and a croissant sandwich.

The Palm Court at The Plaza

When it comes to lavish restaurants, there’s no topping The Palm Court at The Plaza—it’s easy to see why this lively space has been the ultimate New York destination for afternoon tea for over a century.

It was recently renovated by renowned architect Thierry Despont, who looked to the lush greenery of Central Park for inspiration. He brought in potted plants, sky reaching palm trees, fretwork and trellis design details, and a stained glass dome that pays homage to the original from 1907. All of this combined conjures up a palatial garden room that’s sure to make even Eloise pause.

There’s a charming story behind this split level Mediterranean restaurant in Manhattan’s Flower District: It was once a historic flower shop and greenhouse. Pergola’s owner has kept many of those architectural elements—such as the skylights and garage door facade—and stayed true to the building’s flower shop roots by bringing in fruit trees and palms.

There’s also an indoor herb garden wall, with the fresh mint and rosemary used for the cocktails. But while the cocktails are fragrant and delicious, it’s the lush ambiance that’ll keep you lingering for more.