This London Home Was Built Around a 100-Year-Old Tree 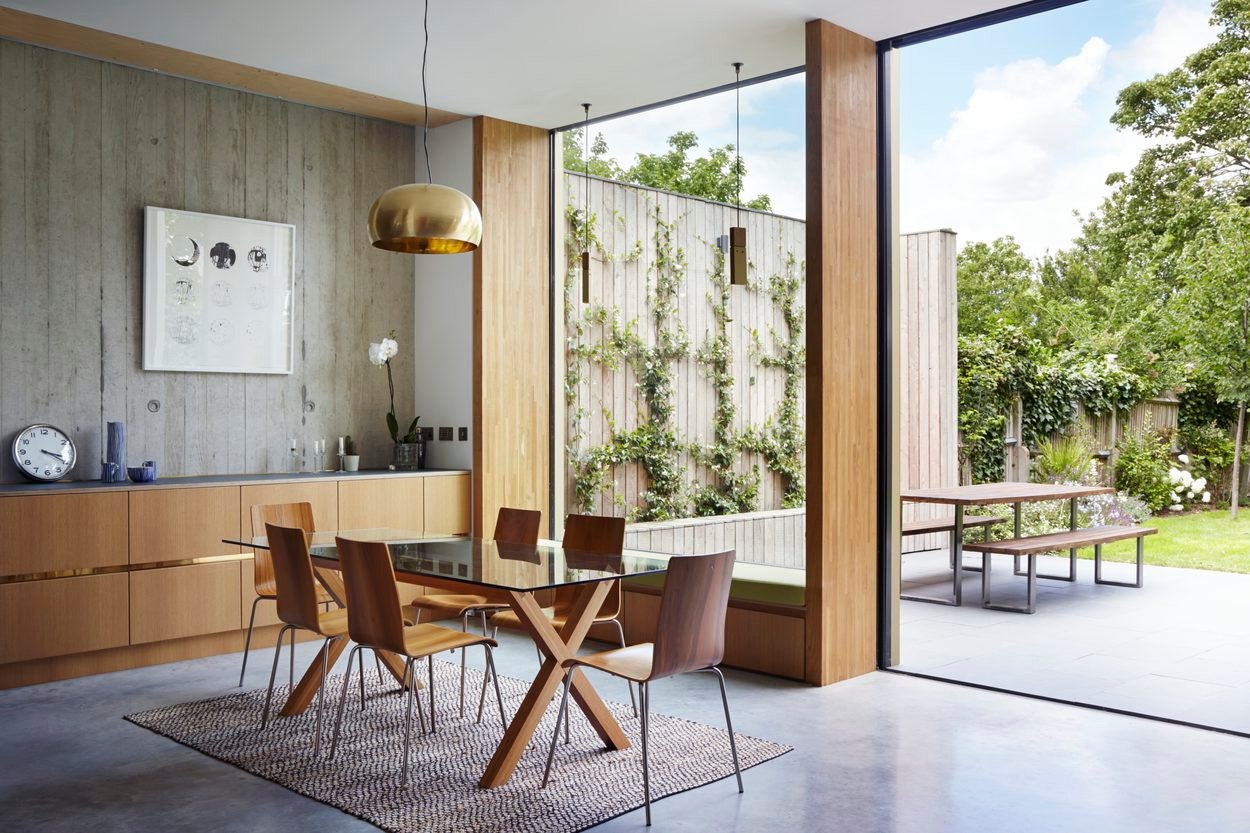 When architect Jake Edgley and his wife found an abandoned plot of land in London that was formerly a Victorian-era market, they could see its potential as the location for a home with their three kids. What they didn’t see was a 100-year-old pear tree, which was buried under ivy and trash.

But once it was discovered, the tree became an essential component to the layout Edgley and his namesake firm devised: two wings that surround a central courtyard and frame the trunk. “The house was designed around a simple concept of privacy and light,” Edgley says. “There are solid walls facing the sides where the site looks toward neighbors, and lots of glass to the central pear tree courtyard.”

Because of this, the property is decidedly airy, but Edgley was sure to choose materials, such as concrete and wood, that would be “tough enough for a two year old in dirty wellies holding a felt tip pen.” And in addition to including thermodynamic roof panels and rain water harvesting, Edgley also chose formaldehyde-free materials and non-toxic paints to complete his vision. Now the outstretched branches thrive on a site where modernism yields to Mother Nature.

Edgley chose exterior materials — including southern yellow pine, anodized aluminum trim, and powder-coated aluminum panels — that would complement the surrounding vegetation. “The dark finishes are broken up by the gold anodized trims, and horizontal details are eliminated where possible so that the building is a composition of vertical forms that blend into the surrounding trees,” he says.

Polished concrete floors and board-formed concrete walls were used throughout the home. A pair of Days Forum sofas from Habitat anchor the living room. A Dwell coffee table and cowhide rug complete the space.

Related on Hunker: It’s Easy to Imagine Yourself on the Terrace of This Overhauled London Property

Built-in birch shelving and seating off the stairwell make a perfect place to curl up with a book.

Related on Hunker: A Couple Builds a Silicon Valley Property With Nature, Not Technology, in Mind

In the dining room, a brass pendant light by John Lewis hangs above a Habitat dining table. The pendants above the window seat were made by Edgley Design from leftover building materials.

A sliding door in the kitchen features a bright red felt finish, and the island is made of brass with an inset oak veneered panel. The countertops are a dark grey resin quartz, and the barstools are by Metro Retro.

Edgley designed the master bedroom’s floating bed, which is paired with a stained-timber headboard. The architect also painted the artwork above the bed.

Frosted glass adds privacy without restricting light in the master bathroom, which features a soaking tub from Bathstore.

The walls of the guest bathroom are lined in Terra Maestricht tiles by Mosa, and the linoleum flooring is by Forbo.

“A London Architect Builds His Family’s Home Around a Century-Old Tree” was originally published on Hunker.