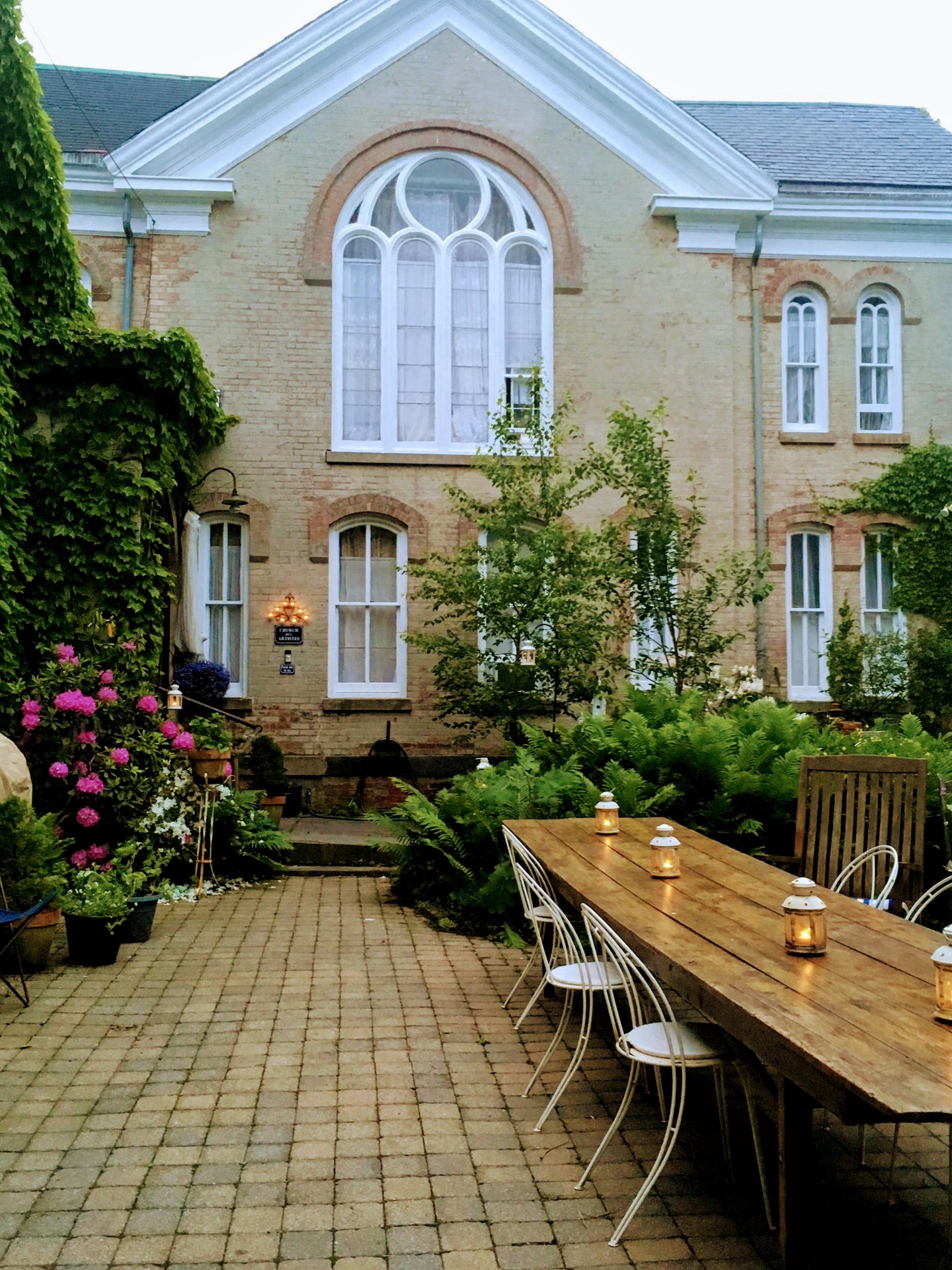 When artist Julie Hedrick and her husband, composer Peter Wetzler, were traveling back to Manhattan’s East Village from Hedrick’s art exhibition in Toronto almost 30 years ago, the last thing the couple expected to find was their future home—a sprawling 19th-century Romanesque church in upstate New York. But that’s precisely what happened. “It was an accidental stroke of luck discovering Kingston, New York,” Hedrick says. “We had only pulled into town looking for gas when we found ourselves a church for sale.”

Over the past three decades, the pair have transformed that 4,000-square-foot church into an artist’s oasis and bed-and-breakfast, aptly named Church des Artistes—which translates to “church of the artists.”

The aspiration of opening a B&B is one shared by many. Here, Hedrick tells us about the biggest lessons the couple learned in their renovation journey. After all, you never know when you might just find the property of your dreams.

We definitely had dreams when we first saw the church that were as big as the church itself! The entire property is two separate buildings at right angles to each other: the main sanctuary and the chapel.

At first, we used large sheets of paper to draw and reimagine the space, and whenever we would suddenly have an idea, we would make notes on the sides. We hired an architecture student to help us with the final drawings, which we planned on presenting to the city building department. We were very young and idealistic and didn’t have much money. We realized that we needed to break down our dreams into stages, and some of the stages we planned in terms of years.

The church was built in the early 1800s—a beautiful Romanesque jewel. As we’ve worked on it over the years, we have tried to honor its original design and architecture, as well as the original materials used. Visitors often say that they feel as if they’ve been transported to another time but are simultaneously captivated by the very large contemporary paintings on all the walls.

When we converted the balcony of the original sanctuary into a second-floor residence, we could trace the demise of the church by the history of paint on the walls. The current layer of paint was a depressing brown and underneath that a beige color, but underneath that was a glorious cerulean blue with hand-painted stencil designs. We did our best to reveal the original paint, and in places where the plaster had to be replaced, I blended in newer walls. We called the renovation the Pompei Room.

Thanks to Craigslist, local upstate New York antiques shops, Goodwill, Restore by Habitat for Humanity, the Salvation Army, and, of course, yard sales, furnishing the church has been an incredible adventure. We found and repurposed 12-foot doors from the same era as the church that were being tossed out, and we built walls and rooms around them so it looked like they had always been there.

We have also discovered amazing claw-foot tubs and pedestal sinks, doorknobs, and light fixtures. It’s not as hard as you might think it is to pop a claw-foot tub in the back of a Prius—we’ve done it numerous times!”

Don’t Forget About the Outdoors

The original garden was a dried, grassy, weedy front lawn in front of the chapel, wedged between the back brick wall of the main church and the side brick wall of the parsonage. We immediately imagined the possibility of a secret garden.

We slowly began to work our way from the outer walls inward. When we first moved in, there was already a little ivy growing on some of the walls, which we encouraged. We threw wildflower seed into the lawn and let it grow instead of mowing. We sourced wild plants we loved like ferns, phlox, and moss from the woods. We also planted roses and herbs for their scent and because we use them in cooking. We wanted to make it a habitat for wildlife.

Although it’s not a large garden, it has two peach trees, an apple tree, and a plum tree. It really has become a magical place with hundreds of busy solitary bees, a family of cardinals, and mourning doves, all nestled in.

Accept That Setbacks Can Be Blessings in Disguise

One thing we’ve learned the hard way is that preparing, both emotionally and financially, for change, delay, or added expense really helps. When rushing to get to the end of the renovation, things always got held up for one reason or another, and sometimes in hindsight, it was the best thing that could have happened.

We’ve changed our mind about design and have been grateful for the extra time to think, contemplate, and re-create our initial design. As Peter often says, the universe is a conspiracy for our own benefit.

Discover more in upstate New York: A Design Lover’s Field Guide to Upstate New York How a Designer Turned an $18,000 House Into Her Dream Home A Renovated Farmhouse, Draped in Cozy, Colorful Textiles