Inside a Trendy DC Restaurant That Used to Be a Bank

Succotash is located in the landmarked Equitable Bank Building. 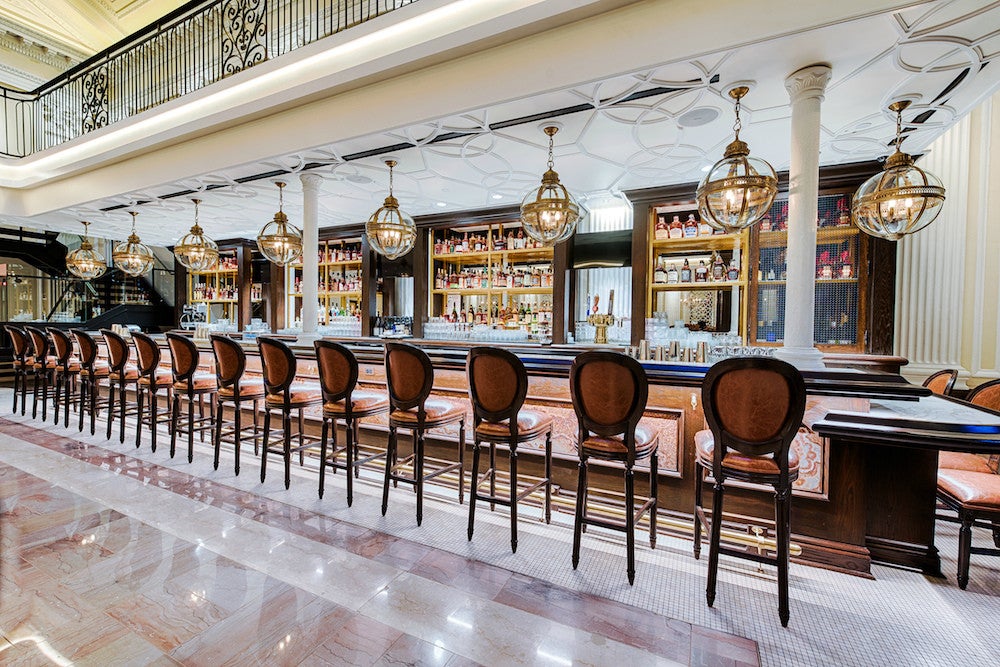 Succotash in Washington, DC, isn’t your average restaurant. The brainchild of Michael Reginbogin and Jason Berry of Knead Hospitality + Design, it’s not only the space’s grand marble floors, chic hardwood bar area, and myriad of chandeliers that grab your attention—although they certainly add to the appeal. The draw of Succotash is where it’s located: in the city’s Equitable Bank Building, which just so happens to be landmarked.

“As one of only 15 interiors and exteriors designated as a historic landmark in Washington, DC, we knew we had our work cut out for us,” say Berry and Reginbogin. “While not apparent at first, we quickly realized how difficult it would be to create a functional, operating restaurant while maintaining the integrity and historic nature of the 1912 banking hall.”

In order to maintain the building’s important features, the two founders worked closely with the Historic Preservation Office and the DC Historic Preservation Review Board throughout the project, making sure their vision didn’t interfere with the architectural integrity of the landmark. One such example? The installation of a 1,200-square-foot mezzanine floating balcony inside the bank’s atrium caused significant delays to the timeline of the project, due to issues with the weight and length—but had to be done in order to preserve the building’s original columns and molding.

Since the restaurant is a massive two-story, 9,300-square-foot space, the designers wanted to keep the grandness of the space alive, which turned out to be pretty easy. “The historic banking space, with its Greek revival interior, Corinthian capitals, ornate plaster ceiling, and prototypical ‘temple front,’ was the perfect backdrop for our flagship location,” say the designers. “While we indulge in the ‘what’s old is new’ approach, we do so with a restrained hand, striving to showcase the traditional in a new, polished, and approachable context. For example, the custom, contemporary upholstered dining chairs were anointed a touch of chic from a traditional, powder blue French toile fabric.”

That blue theme gives the space a more airy, open feel, while the exposed industrial glass gable and ductwork encapsulate the open floor plan. The hand-painted sky canvas mural in the bank’s original vault room boasts shades of steel, aqua, and cobalt, while the contemporary 3D modular wall panels and tufted benches give it a modern feel.

The designers also wanted to keep up with the southern theme of the restaurant, and made sure that those older design features married well with their contemporary touches.

“Wrought-iron detailing, reminiscent of the New Orleans’ Garden District, softens the contemporary lines of the hanging bar structure on the second floor, while red onyx inlays, box molding, and an oversized bullnose bar top add a touch of historic charm to an otherwise sleek and contemporary bar on the first floor,” they say. The result is a more refined take on mid-century modern, but with the grandness and scale of the 1920s.

Some other luxe elements include a $350,000 lighting budget—evident by the impressive chandeliers. “Much of the lighting was designed to be recessed, discreet, and indirect—to accentuate what was already there,” say Reginbogin and Berry. “When it came to decorative fixtures, we wanted them to further the restaurant’s southern narrative without seeming forced or obtrusive to the original nature of the space. Two custom, eight-foot iron chandeliers were inspired by the grand oak trees of the South. Metal oak leaves wrap along the arms of the fixtures and travel up each canopy, disappearing in the laylight structure. While sizable, the chandeliers’ design remains open and light, offering transparency to the details beyond.”

To seat the 330 guests Succotash can accommodate, the designers needed to keep the furniture footprint organized, yet flexible—which is why so many seating options have been used. “Tufted Sinatra-style booths on one side of the room balance the weight and heft of the 20-seat bar and its brass, illuminated glass shelving,” the designers explain. “A low profile central linear tufted banquette divides the atrium floor, while arched-back benches between pilasters line the mezzanine balconies, softening the strict architectural qualities of the space. A mix of contemporary custom dining chairs of stately brass nail, head-trimmed cognac leather and whimsical, powder blue French toile add warmth and color to the atrium’s color palette.”

And of course, you can’t discount the grand entrance. The brass-framed glass doors that were original to the 1912 building have been restored, and are now flanked by oversized glass lanterns. A second set of glass doors and a glass-coffered ceiling greet you upon opening the first set, after which the main arrival area exposes a dark hardwood host stand.

“Having once been a bank, the host stand pays homage to the grand teller desks that once inhabited the historic banking floor,” say the duo. “The host stand anchors the room, drawing a line of symmetry and setting the tone for what lies ahead.”

The total design of the space was therefore a three-part venture, orchestrated meticulously to keep the historical features of the property present, along with a more contemporary feel. Despite the old-school gold and hardwood features, the exposed floors add some more openness to the space.

As the designers put it, “The airiness of the space was maintained by keeping the color palette neutral and limited. Only two white tones—eggshell and gloss—were used to accentuate the walls and plaster detailing throughout. The restrained furnishings—while monotone in color—are rich in detail and finish, and add another layer of complexity and spirit to the design. Lighting adds the final layer of finish, emphasizing the space’s original nature and workmanship.”