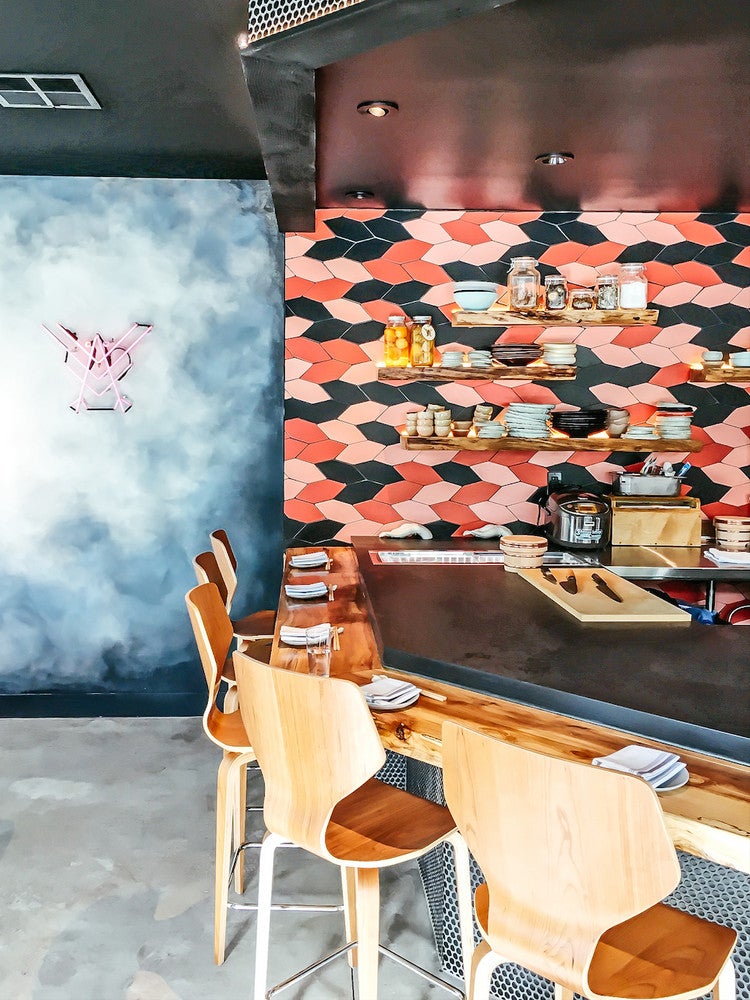 When chef Adam Tortosa started dreaming and scheming about his own sushi restaurant two years ago, he envisioned a space that wouldn’t be just another raw fish spot. Instead, he wanted a destination that would both please taste buds, as well as impress with its design. To make that happen, he turned to Bay Area artists and designers to create a space with dramatic, ‘70s rockstar glam, along with Japanese accents.

The result? Robin, a hip omakase sushi spot in the Hayes Valley.

“Many high-end sushi places have a temple-like environment—they can be really intimidating. I really wanted Robin to have personality and soul, but the most important part—in my opinion—is that the guests have fun,” says Tortosa. “They’re coming in to eat, yes, but I’d rather have them feel something than just be like, ‘Oh, that food was great.’ I’d rather them say, ‘I had a great time.”

For Tortosa—who earned his sushi-making skills under Los Angeles Master Sushi Chef Katsuya Uechi—Robin is all about utilizing Japanese technique while using as many local, Northern California products as possible. He wanted to curate the same aesthetic and thoughtfulness you would expect from a restaurant in Japan, but with Northern Californian influences.

“I took a lot from my time with Chef Uechi, like his approach and precision with ingredients, but I wanted this cuisine to be my own,” Tortosa tells Domino. “For example, umeshu or plum-infused sake is super traditional, but I made a bunch of iterations with local produce like Buddha’s Hand, Asian pear, and yellow peach.”

Since the food has a local touch, it’s only natural that the interior would feature many local designs as well. “I really wanted to curate a fun environment, and ultimately chose artisans that I would want to spend time with. As we worked together, they turned into friends—people I wanted to be around,” says Tortosa.

For example, impressed by her gold work throughout San Francisco, Tortosa brought on decorative artist Caroline Lizarraga to patch up his broken cement floors with the century-old kintsugi technique traditionally used to repair broken pottery. The technique infuses gold into the works, so Lizarraga used rose gold resin for the base, and then went further by adding the rose gold drippings to the smokey gray walls. This gave the entire space a theatrical feel.

“I saw Caroline Lizagarra’s work at Nightbird just down the street, and totally fell in love with her work. We worked really well together—I really trusted her vision, and in turn, she went above and beyond in the space,” says Tortosa.

The ceramics were a collaboration with another Bay Area favorite, Jered Nelson of Jered’s Pottery. The two worked together on curating custom pieces—in fact, some of them were burned, stained, and stamped by Tortosa himself, which made the dining experience even more unique. (You don’t often get to eat food from plates made by the chef!)

However, the piece expected to garner the most Instagram posts is the

set against the gray wall. Created by graphic designer Jordan Ma, the sign displays a contemporary robin interpretation, and is totally eye-catching. It fits perfectly against the the blonde, Alderwood sushi bar by Bay Area crafter Terra Amico and the custom-made mosaic tile wall by FireClay Tile.