We’re Calling It: Muralists Are the New Ceramists

Why a painted wall is the art form of the moment. 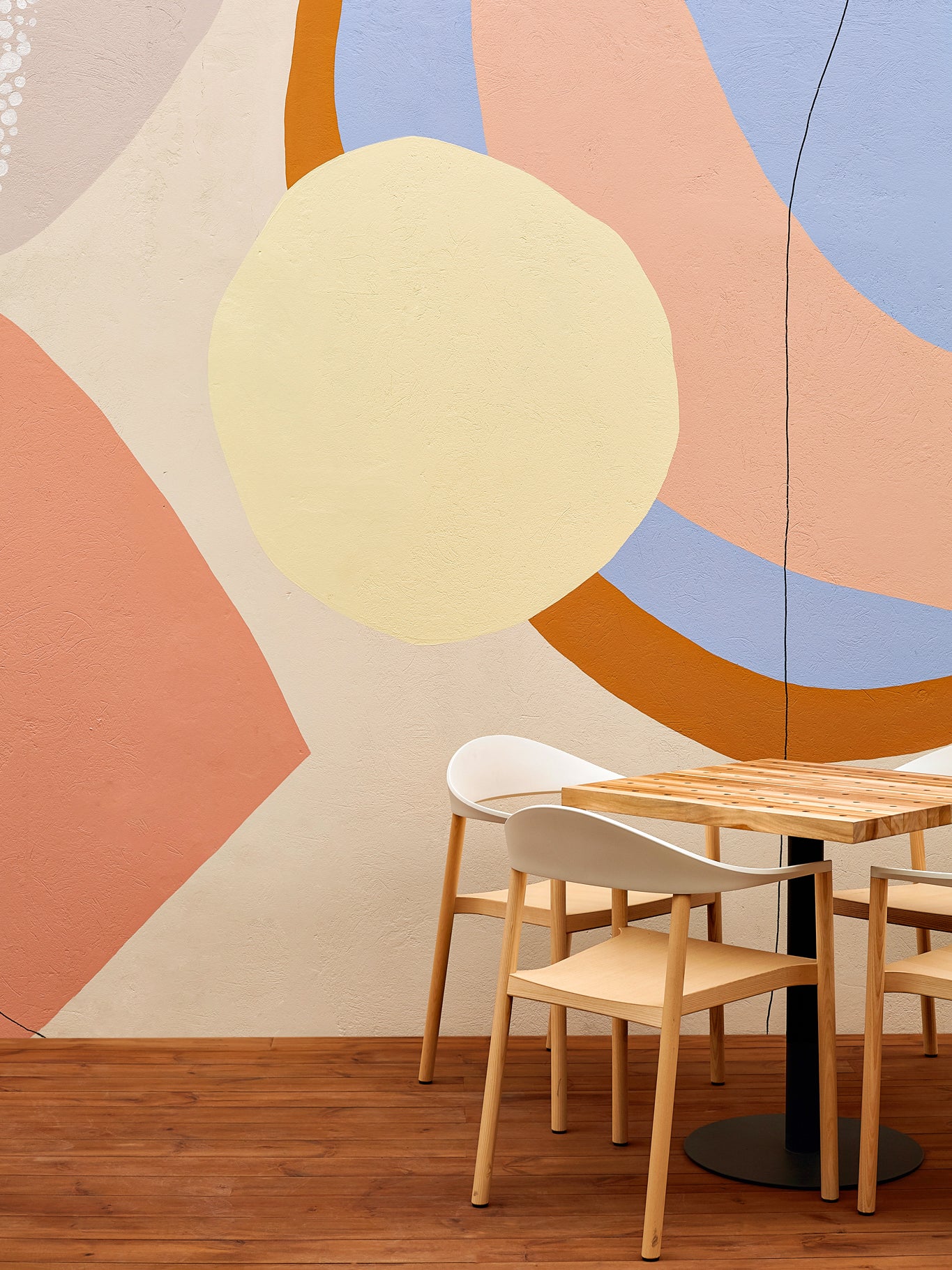 There’s never been a better time to pick up a couple of buckets of paint and use that blank wall as a canvas for all the geometric, abstract, Matisse-like, and nature-inspired shapes you can imagine. Murals are having a moment, and Instagram is to thank.

That’s what artist Lea Carey (who also happens to have a few pieces of home decor in Urban Outfitters’s Artist Editions) realized when she decided to paint her first mural—a spontaneous project in her kitchen—back in 2016. “I think there was something about it people could relate to,” she says. “Like: Hey, I should buy some paint and go rogue on my walls, too.”

Colorful, large-scale murals aren’t just popping up in private residences—they’re everywhere from restaurants to retail stores. They’re not quite the Insta-bait that first gained popularity about five years ago (think: influencer-mobbed cheesy slogans and angel wings), but rather something simultaneously playful and refined, offering messages that transcend words.

As with ceramists, Instagram has become a platform for muralists to share and spread their work, acting as a digital portfolio. Artist Alex Proba attributes her A Poster a Day project, during which she designed, you guessed it, a poster every single day from 2013 to 2017, posting each to her feed, as the thing that helped her build and interact with an audience, not to mention hone her art. “Making something every day helped me understand what I like making and what I’m good at, and that made me grow to who I am today,” she says.

By the time a friend and former boss, Aaron Robbs, asked her to collaborate with him on her first-ever mural for Dropbox HQ in 2016, she felt prepared—though, admittedly, a little intimidated. “Once you have a challenge like that in front of you, you just figure it out and go for it,” she says. “I kept thinking, the worst thing that can happen is painting over and starting again—which is ultimately not bad at all.” Since then, Proba has become quite the mural aficionada, with work featured in Kin Euphorics’s Brooklyn speakeasy, Tia health clinic, and cafés and restaurants worldwide. She estimates that at least 60 percent of her commissions come straight from Instagram. “If [people] like my work, they can directly reach out,” she says. “It’s easy and totally makes sense.”

Artist Marleigh Culver agrees, pointing to Instagram and Pinterest as major tools for scoring commissions, like her first-ever mural, completed last October in Wild Ones’s pop-up in New York City’s SoHo neighborhood. “It was on such a busy street and in a beautifully designed place,” she says, “I just thought, after I completed it, that it was all I wanted to do.”

For Culver, it’s the scale of murals that make them so exciting. “I get disinterested when I have less space, because then I can’t fully use the amount of space and color I need to express myself,” she says. “I just love pouring it all out there for everyone to see.”

Of course, it requires time to put together such a large-scale project. Culver’s Wild Ones mural took about two days (with the help of a taller friend and her boyfriend)—though the process, for some, is part of what makes this art form so magical. “I think, in part, murals resonate on Instagram because you can see the various stages of design and painting in real time, not just the final product,” says Carey. Simply put: On the street, you might spot a mural serendipitously on your everyday commute. But on social media, you get the full story.

A work of art may say something different to each person who beholds it, but there’s something universally inspiring about a painting that stretches far beyond the confines of any canvas. And in the form of splashes of color, oversize flowers, or even a few cartoon geese for good measure (all of which can be found in Carey’s mural for Brooklyn restaurant Gertie), there’s plenty of material to fill you with some sense of whimsy, joy, or even just momentary bemusement, before you continue your stroll (or scroll).

“What I love most is that murals completely transform an environment—they add life and personality,” says Proba. “They make you smile when you see them. They are an emotion for me.”

See more trends: Vanity Tables Are the Glam Way to Stash Your Skin Care Google Says This Is the Most Popular Design Style in the U.S. Your Grandma’s Favorite Look Is the Next Big Decor Trend