Bold wallpaper was totally worth it.

and
Elly Leavitt
By
Brittany Chevalier 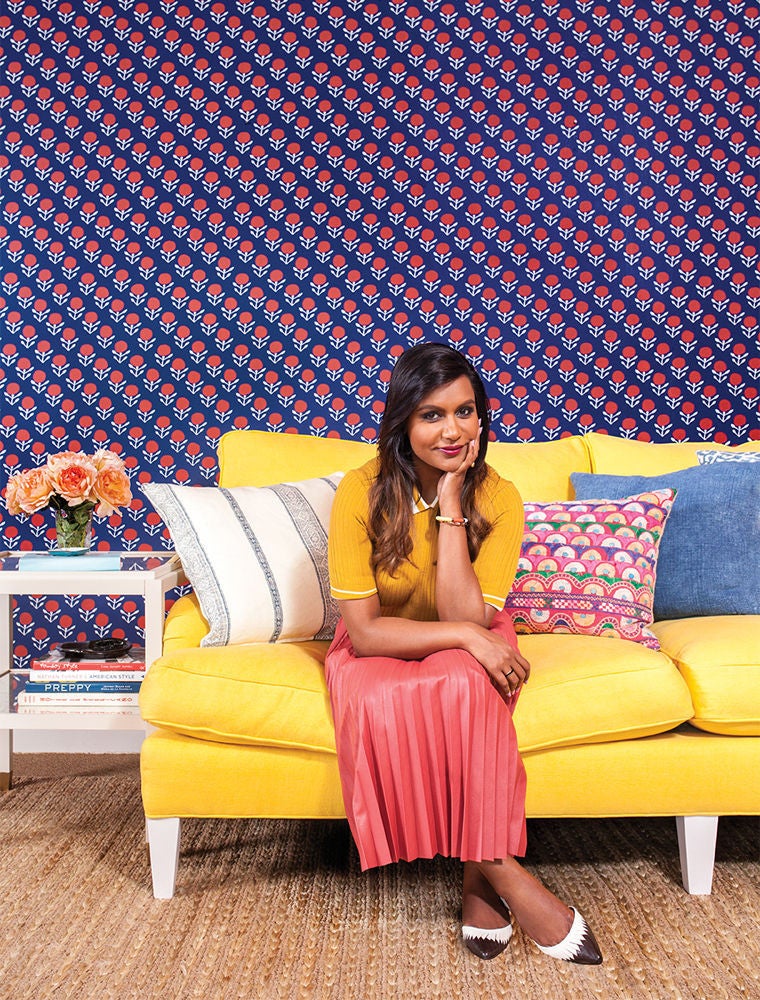 With two New York Times best-selling books and a bevy of movies under her belt, you’d expect interior design to be the last thing on Mindy Kaling’s mind. But in 2015, the actress found herself craving a remake of her office on the NBC lot. For help, she called on Nathan Turner, star of Bravo’s Million Dollar Decorators and designer extraordinaire.

“Mindy is hilarious and has amazing personal style,” says Turner, “so I knew right away it would be a fun project. She always knew what she wanted, and that makes all the difference.” When Turner scouted Kaling’s office, he spotted many spirited pieces, such as photos and mementos, but felt that the space didn’t, as a whole, represent her. “I really wanted to give this office some of Mindy’s great personality while keeping it functional,” says Turner. Knowing that Kaling isn’t afraid of daring hues, he presented her with three bold design options. Of those, she selected the one featuring Serena & Lily’s Blossom wallpaper in navy and a sofa upholstered in yellow, her favorite color. “Nathan chose pieces that are so vivid and complementary,” says Kaling. “I wanted a bold wallpaper. It’s such a commitment, but I was ready for it!”

Whether you’re overhauling your entire office or just want to refresh your workspace, here are a few helpful tips from Turner:

“The most important thing to remember is that your office is a working environment, so it’s crucial to keep it practical and useful,” says Turner. By all means, select that fuchsia pink armchair—just be sure to have a functional desk, too.

Keep Sentiment Out of It

Turner cautions against making the office feel too much like your own place. “Don’t get too personal,” he adds. “Save that for home!”

“You’re the boss; don’t be too extravagant,” advises the designer. “Steer clear of big-ticket items.” Instead, invest in things that will make a noticeable difference—whether that’s the latest tech or just a really nice coffee machine (hey, we all have our priorities).

Kick It Up With Color

“People feel happy in pleasing spaces, so have fun accessorizing with brightly colored throw pillows and lamps,” says Turner. It can be as simple as a Technicolor stack of coffee-table books or as dramatic as wallpaper. It’s all in the details.