49 Percent of Americans Would Give Up Sex for Closet Space

People are also pulling a Carrie Bradshaw and storing their clothes in the oven. It's a mad world. 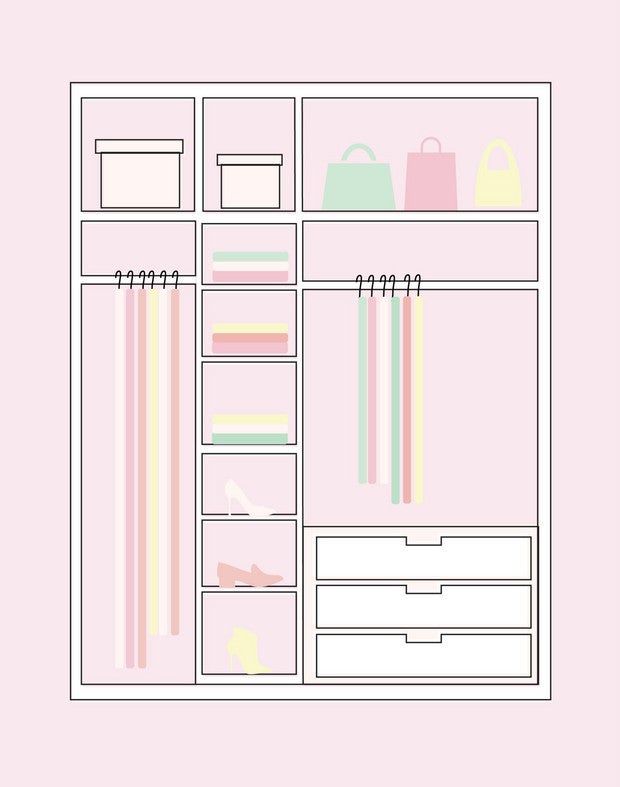 People—with the exception of Marie Kondo, whose level of organization is not one to be easily rivaled by mere mortals (though you can try)—accumulate a lot of stuff. That’s a given. It’s why The Container Store is still in business.

But do you know how your hoarding habits match up to those of the average American? MakeSpace’s recently conducted study—efficiently dubbed The State of Stuff in America— surveyed 1,000 men and women to find out just that.

What is the state of stuff in America? Apparently, pretty overwhelming. The general consensus is that while we may be looking to clear the clutter, it isn’t working. There are a lot of material possessions, and not quite enough square footage in which to store them.

“This survey confirms what we’ve known at MakeSpace for years—that while people are seeking out a more minimalist lifestyle and choosing to live in smaller spaces or downsize, most still have a lot of belongings, many of which have sentimental value,” explains MakeSpace’s chief marketing officer Richard Mumby of the main reason people struggle with storage.

Between the 47.7 percent of people who copped to holding onto either their own or their kids’ toys and books (even those which are no longer useful) and the 25.8 percent refusing to surrender their high school sports trophies, items with sentimental value are taking up a sizable amount of space. And the solution to this may not be as simple as throwing away your dog-eared copy of Goodnight Moon, since the 41.6 percent of people who say they regretted disposing of their memories make a strong case for keeping these childhood mementos.

The report also disclosed how far people are willing to go for extra storage, succinctly summarized in a section bluntly entitled “Celibate, Fat, and Broke: The Lengths People Will Go to For More Closet Space”. Evidently, 51 percent of men would consider gaining weight, 17.2 percent of participants would take a six-month pay cut, and 49.1 percent of those surveyed would give up sex for half a year because, as MakeSpace puts it, “It’s easier to wear your chastity belt than to try and store it.” Stern, but fair.

It also looks like Americans are turning to unorthodox storage sources to hold all their clutter—15.4 percent of participants pay homage to Carrie Bradshaw and stuff everything inside kitchen appliances, 18.5 percent use the area underneath the kitchen or dining table as storage, and 59 percent rely on the space under the bed.

So, when you have all this stuff and nowhere to put it (especially when tossing it isn’t an option), what do you do? Though daunting, organizing your entire home doesn’t have to be a Herculean task. Start by prioritizing your rooms, thereby compartmentalizing your to-do list and making it more manageable.

In the bedroom, begin by finding alternative dresser solutions to free up floor space, and be sure you’re making the most of your underbed storage with smart and compact bins.

Revamp your kitchen by first purging the room of superfluous tools (do you really need three mandolines? Who are you, Ina Garten?) and then turning your attention to streamlining your pantry.

The closet is the source of the most storage problems, with 67.2 percent of respondents citing it as the most cluttered part of the house. And 52.6 percent even say that they would rather have an extra walk-in closet over an extra bathroom. But while closet space may come at a premium, expanding on it with helpful tools like hooks and hampers helps make use of unused space, like closet floors or empty wall surfaces. (Don’t have a closet at all? Try these solutions to bring order to your clothes.)

And if, at the end of all of this, you’re still not sure what to do with that random end table that just doesn’t fit anywhere, there are more eco-friendly and financially sound ways to dispose of your stuff than via the dumpster. Check out these companies that help you sell your furniture secondhand, or donate your belongings to a shelter.

You might not end up a minimalist by the end of this, but at least you’ll be able to locate all seven of your black turtlenecks without having to overturn your dresser.