how to update your early 2000s kitchen

an early 2000s kitchen gets a much-needed modern update. 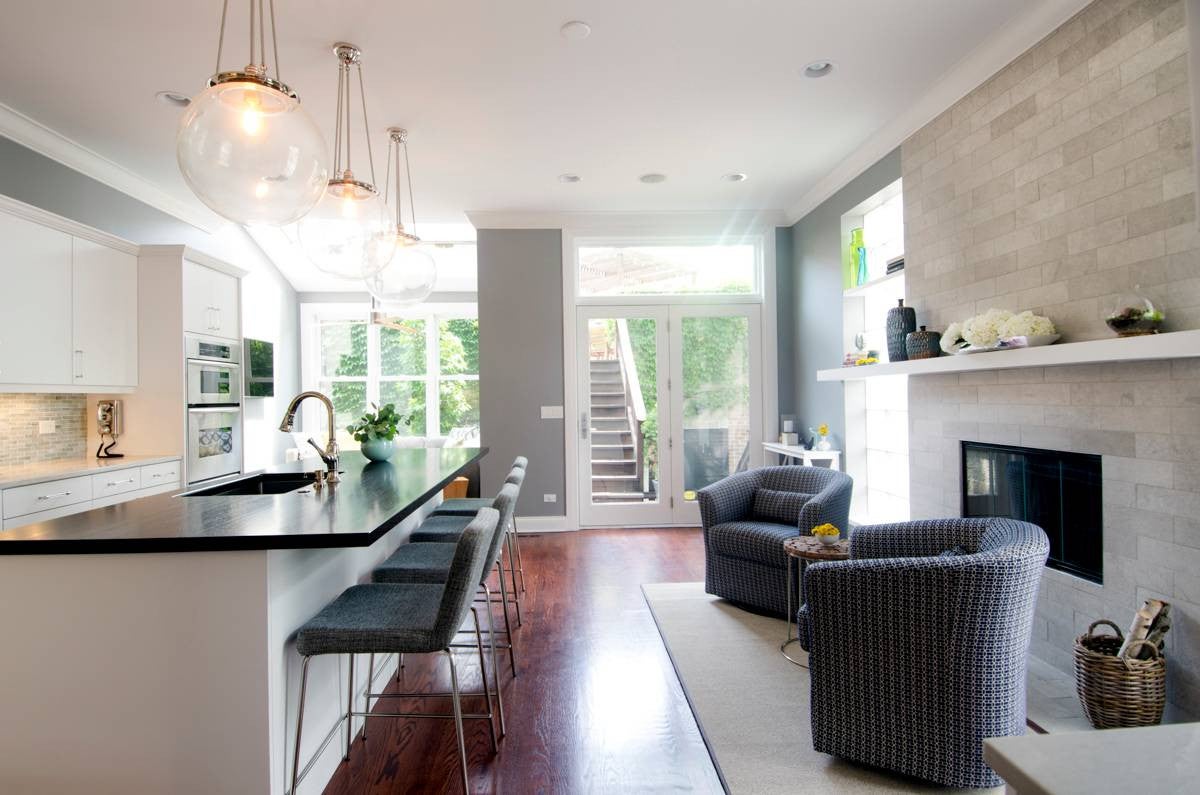 When we think about tired decor trends, we think 90s. Heavy, overstuffed, typically involving bad plaid. But the wave of early 2000s decor that looked a little bit like everyone’s homes were office buildings for half a decade qualify as vintage now, too. We found one such kitchen that was practically begging to meet 2016, and we asked Carly Moeller, Owner & Registered Interior Designer at Unpatterned to show us a thing or two about updating the stuff you didn’t realize you could (should?) already update.

TELL US A BIT ABOUT THIS PROJECT. HOW DID IT COME ABOUT? I was lucky enough that these were repeat clients. We worked together todecorate their roof deck late in the summer the year before. At the time they mentioned they hoped to renovate the kitchen together and about a year later, we got together over drinks to figure this project out.

WHAT PRESENTED THE BIGGEST CHALLENGE? The biggest challenge was probably a combination of the wood counter and the mantel/shelves for the fireplace. Some of the first inspiration images and concept mood boards I showed the clients included a wood counter on the island, which they loved the idea of. We went with the Grothouse wood in Edge Grain Wenge with the Durata finish. We originally planned to match the mantel and shelves on the fireplace to the counter wood, but it was just too cost prohibitive in combination with the island, partially due to the over 13’ length! We ended up working with the GC to have their carpenters build the mantel out of lumber and paint it to match the cabinets. This was less than half the cost of creating them out of the finished wood. In the end I think everyone, myself included, is really glad that we went the white route. Not only was it more budget-friendly, but it allows the wood counter to be the centerpiece of the room and the whole fireplace continues the bright white feeling of the rest of the kitchen perimeter.

WHAT EARLY 2000’S DECOR OFFENDER DO YOU FIND YOURSELF REPLACING MOST OFTEN? Hands down some variety of speckled/mottled dark colored granite in kitchens. Some of them aren’t even that offensive if you freshen up other parts of the kitchen, or reduce the amount of it. But I have had a number of clients in the past year alone that have been insistent on freeing their kitchen of busy/overwhelming black granite!

WHAT IS YOUR LEAST FAVORITE DECOR TREND FROM THE EARLY 2000S? As seen here, the “too much of a good thing” trend of putting the same material EVERYWHERE. More often than not it’s some form of dark or super busy granite. All the counters, backsplash and the fireplace were the same material in this kitchen and it tends to overwhelm and create monotony, even in a large space.

WHAT IS YOUR FAVORITE MEMORY OF THIS DESIGN PROJECT? Definitely when we decided on the fireplace wall concept. The original scope was just to replace the black granite with a different stone or tile surround. I had been looking at photos of the fireplace wall, trying to come up with a creative way to reface the fireplace while making the glass block less obtrusive. I did a really rough and quick hand sketch of the mantel and shelf idea, including the floor to ceiling tile right before a client meeting. When I pitched the idea of tiling the entire wall and adding the massive mantel and shelves, the clients loved it immediately and were totally on board.

WHAT ADVICE DO YOU HAVE FOR READERS HOPING TO TAKE ON SOMETHING SIMILAR? First evaluate what you have and what is working for you or what has good bones. In this case, the clients and I decided that the cabinets and appliances they were working with were still in great shape and that the footprint of the space was working for them. Changing those items would have been a much more costly project. Instead we found ways to improve the cabinets with soft close mechanisms, paint, crown molding and new hardware. Hardware and lighting make a huge difference in a kitchen. Secondly, I would say think big then reel it in. We asked ourselves and the GC – can we eliminate some glass block, how do we create a wood island that works for their lifestyle, can we install a 13’ mantel? Lastly, it would be to find the areas to splurge and to save. I already mentioned the advantage of reusing a lot of the existing (we even reupholstered the swivel chairs instead of replacing them!) This allowed the clients to splurge on the no-maintenance wood countertop, increase the scope of the fireplace renovation and install dramatic lighting. Those were the details that really mattered to them as they continue to live and entertain in that space and were really impactful.