The former reality TV star has a new collaboration with Sherwin-Williams that shows she's not afraid of color. 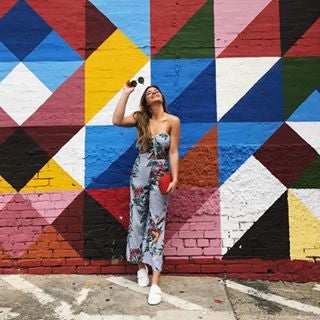 Fans of former Bachelorette JoJo Fletcher might know all about her struggles with finding love before beau Jordan Rodgers, but one thing they might not be so savvy about? Her history with design.

“Most people don’t know this about me, but I’ve actually been working with design and flipping houses for a really long time,” Fletcher tells Domino. The hobby actually started in college: Fletcher’s mother, a real estate developer, said she would build a home for Fletcher and her friends if Fletcher designed it herself… and the rest, as they say, is history. Fletcher is now working with Rodgers on renovating a number of homes around the country, mixing her classic style in a way that brings out the original beauty of the home she’s flipping.

“They always say the fastest way to end a relationship is by flipping a house together,” laughs Fletcher. “But thankfully we have very similar styles, and he helps with the heavy lifting a lot.”

As a result of her love of home design, Fletcher has also been working on a collaboration that’s very close to her heart—creating a set of custom designed color palettes with paint company Sherwin-Williams, as part of their seventh annual National Painting Week. From May 25 to June 4, the company will be donating paint and supplies to a number of partner organizations, including Rebuilding Together and The Boys & Girls Clubs of America and Canada.

“Paint is honestly one of my most favorite ways to change up the design of a home,” says Fletcher. “The primary purpose of this collab is to make sure that people are not afraid of color, because to me, it’s the easiest way to really give more depth and personality to your home.” Fletcher created four unique color palettes that she believes will be able to appeal to a number of styles, and people will be able to find the combination that works for them.

is inspired by Fletcher’s love for travel, featuring beachy hues like a deep blue-green and sandy beige. “For this one, I used Oceanside, Sherwin-Williams’ 2018 Color of The Year, and punctuated it with other vibrant colors,” says Fletcher. This option will have you dreaming about a vacation away.

, the second palette, is what Fletcher says is the closest to her style. “These are all classics: Think high, airy rooms and sleek, straight lines,” says Fletcher. “I prefer using more neutrals, but these colors are still statement-making enough if your preferences tend to lie on the minimalist side.”

on the other hand, is a relatively moody set of hues—but Fletcher promises that these options won’t be too overwhelming. “I love a really dark color in a kitchen or living space; it adds so much depth to a room. I did a merlot wall in one of my renovations that really made the space so regal and fun,” she says.

And while people might be a little hesitant about trying out a dark option, Fletcher thinks a small space, like a powder room or accent wall, would be a great place to start. “Also, Cityscape is a wonderful grey that pairs so well with these darker options,” she says. “You can absolutely mix some neutrals in with the dark.”

the final set in the collection, touches upon Fletcher’s Texas roots. “Blue is such a Texas color,” says Fletcher. “Our flag is blue, and even our state flower is the bluebonnet. So it only made sense to have the focal point of this palette be In The Navy.” And then, some flirty pinks, not at all boring neutrals, and mint greens round up the fun look.

Fletcher recommends people mix and match the colors they like in each palette—they definitely don’t have to pick all (“That might be a little crazy!” she says), but she hopes it will encourage people to have fun in their space. “I don’t really have any rules,” she says. “I think your home should be a direct reflection of you, so why try to follow something you don’t really care about?”