The bride sifted through 64,000 inspiration images on her phone. 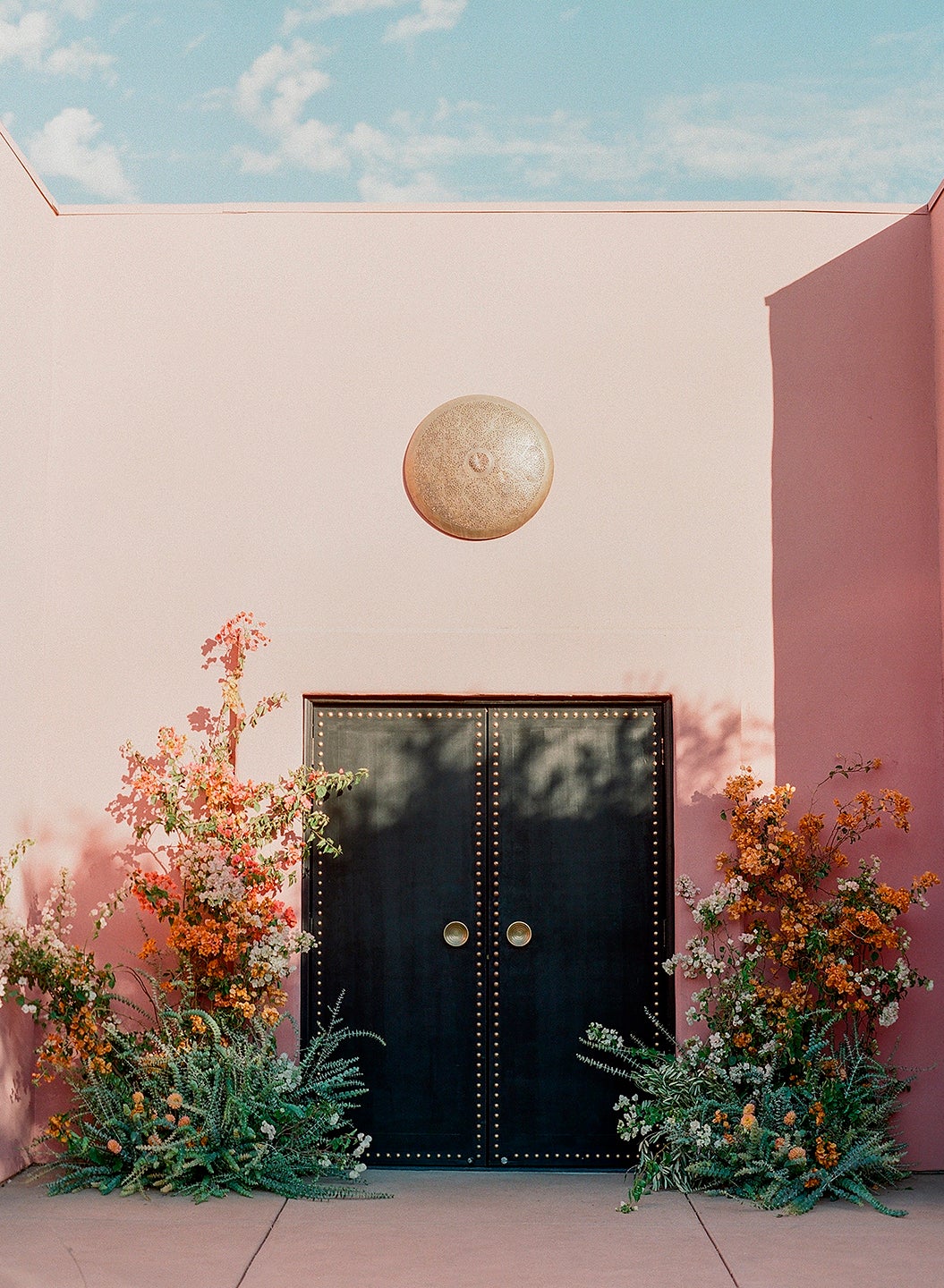 The original plan was always Palm Springs. But after months of fruitless searching for a venue that would fit 112 of their nearest and dearest for an entire weekend, Melissa Shelton, president of Swiss furniture brand Vitra, and her fiancé, Tyler Baker, an intellectual property attorney, switched their focus to New Orleans, Shelton’s hometown. There they would exchange vows in a restored historic church and decorate the day with rich velvets and jewel tones.

But before they had signed on the dotted line, to their surprise a new hotel opened in Palm Springs “like a mirage,” says Shelton. The dreamy desert destination was the place where the Brooklyn-based pair fell in love, so they immediately knew the Sands Hotel & Spa was meant to be the setting for three days of wedding festivities in the fall of 2019. The pink stucco walls and California Gold bougainvillea decided another important aspect: The couple would have to tone down their original moody palette in favor of sun-washed shades.

Thankfully, finding inspiration on the property wasn’t a problem. Between the hotel’s lush olive grove, glittering pool, and all-around Moroccan-inspired aesthetic, there were plenty of hues for the pair to play off of for their stationery, the bridesmaid dresses, and even the cocktails. They eventually landed on soft rose, marigold, brass, sage, black, and white. And unlike at a blank venue, they wouldn’t have to bring in any furniture. In fact, even the woven bistro chairs held hints of their green.

Back at her office in New York, Shelton flipped through a book from a friend, The 60s: The Golden Age of Advertising. The pink polka dot cover and mid-century design set the pitch-perfect tone for the big day and helped jump-start her mood board, something she does for every project—her phone holds more than 64,000 photos that she uses for ideas.

“I’m always cataloging things in my mind, and before Instagram had the save feature, I was screenshotting,” she says. “So I already had a couple of albums on my phone that were just wedding inspo. I have a folder in which I save images that have really great color schemes.”

Though she eventually got the pros involved, namely California-based event production company Bash Please, to manage the symphony of vendors and collaborate on a step-by-step action plan, Shelton wasn’t about to give up all creative control. “As such a visual person, I was not looking for someone to design the wedding,” she explains. She already knew the kind of atmosphere she wanted to create: a lush outdoor party that would start at sunset and go late into the night.

On Saturday, November 2, the couple did just that, saying their “I do’s” surrounded by those rosy walls and climbing golden blooms, then joining a second line parade to the cabana-themed café, where they drank on-hue lemonade cocktails under a disco ball and danced to Lizzo and Dua Lipa into the early-morning hours. It wasn’t New Orleans—it was even better.

Guests got a taste of the weekend’s upcoming events—and the blush tone that would dominate the day—via a letterpress stationery suite by Aerialist Press.

It Was All Yellow

A subdued marigold popped in dahlias and the pick-your-own bridesmaid dresses, which the women decided on through a group text chain.

Desert shades look especially dreamy against a crisp white dress—in this case an Anne Barge strapless gown that Shelton later replaced with a custom tea-length frock, followed by a sequined jumpsuit by Nashville’s Any Old Iron.

In the spirit of letting her surroundings do the work, Shelton pulled a subdued green—“Not a pine, softer,” she says—from the property’s olive trees and checkerboard tile floors for her save-the-dates and cocktail napkins.

California Gold bougainvillea trails along the Sands property, so naturally the hue became part of Shelton and Baker’s floral arrangements, too—and even subtly appeared in the pink lemonade drinks and flowers floating in the pool.