The taco stand was just one of the many highlights. 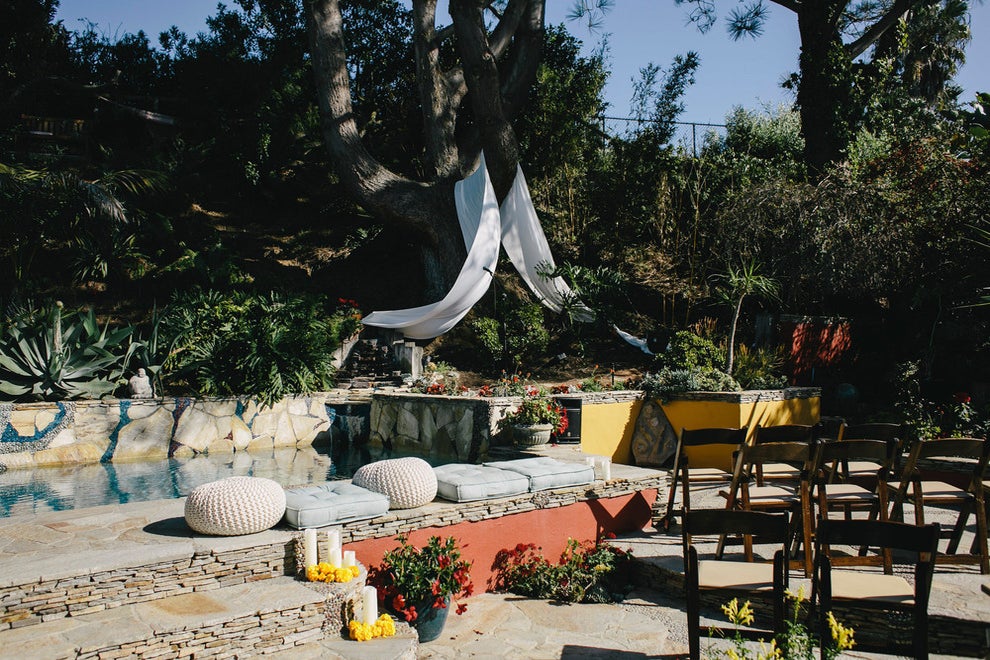 For Connie Wang and Nathan Reese, it wasn’t exactly love at first sight. “We went to college together but didn’t know each other. When I moved to New York, a mutual friend introduced us, and I wasn’t really sure if it was a date or not… I thought maybe she just wanted me to meet Connie because she would be a good friend to know. Totally plausible, right?” says Reese. “We had a night out and didn’t really hit it off. Six months later, I ran into Connie at Union Pool in Brooklyn and asked her out again. So that’s the romantic Brooklyn story there.”

Fast forward one first date—technically, second—spent at a concert (“Nathan’s a music person; I’m a music agnostic person. He asked me out to a show of a band I hadn’t heard of, in a venue I hadn’t heard of. The band is still a band that Nathan loves and I can’t stand,” says Wang) and five and a half years later, Reese proposed to Wang in their apartment while the couple was packing for a trip. Though, much like the way they met, it wasn’t supposed to happen that way.

Reese, the editorial director of T Brand Studio at the New York Times, and Wang, a features writer at Refinery29, approached the wedding process in a similarly low-key way. They had a quiet wedding at City Hall in New York City, followed by a more formal (well, as formal as floor poufs for seating and a taco bar can be) ceremony and reception at Reese’s family backyard in Encinitas, California. No bridesmaids were harmed in the making of the big day. And the bride had only one specific request: “Hot cheetos. That was non-negotiable,” says Wang.

“I never really dreamed about a wedding! I dreamed of the person I would be marrying, and Nathan fit the bill,” she continues. “In terms of the actual [day], I just didn’t want to feel embarrassed or uncomfortable. I wanted it to be engaging and personal, and that was it. It was mostly about the feeling we wanted to evoke than what was actually there.”

Even the flowers were slightly unconventional. “I’m not a flower person!” says Wang. “I don’t do well with flowers. They always die on my watch.” In lieu of formal centerpieces, the couple’s planner suggested an assortment of carnations and marigolds for a pop of color. Wang picked a couple to use as her bouquet for a pretty, simple look that worked perfectly—with one minor caveat: the smell.

“We spent the entire day before popping off the flower heads of hundreds and hundreds of marigolds. It’s literally one of the worst smells I’ve ever smelled in my life,” she says.

And yet, despite all the fun takes on custom, Wang and Reese didn’t totally throw tradition to the wind. “We felt like if we were going to do the backyard thing, we didn’t want people to mistake it for a barbecue,” says Reese. “We did everything, just more relaxed.”

They made sure to highlight elements from their respective cultures, too. Including the Chinese custom of paying respect to their ancestors, for example, and following the Jewish tradition of people coming up to give blessings. Though they did put their own spin on tradition: In lieu of a traditional Hebrew blessing, friends came up to do interpretation of themes (one of which included a rendition of a Celine Dion cover on guitar), and while they did have a chuppah, Reese says it was more like “a suggestion of a chuppah” made out of extra material from Wang’s wedding dress.

Speaking of the dress, it was the one part of the planning process Wang locked down before anything else—fairly unsurprising, given her background in fashion.

“My friend Jennifer Chun is a designer,” she says. “She doesn’t really do gowns, but I liked the idea of doing something that felt a little more casual. She agreed to do one for me and that was such a fun process. It was the one thing I wanted to get done.”

Afterwards, her focus shifted to one part in particular. “Nathan and I are both writers, so our vows were really important,” she says. “I think this is more of a personality thing, but for us it was so important that people have the right feeling at the wedding and not necessarily the right photos for Instagram. We focused most of our attention on saying the things we wanted to say. We worried much less about the flowers or the runners or things like that. That saved us a lot of money actually because most of the things we focused on were essentially free.”

And at the end of the day—which may or may not have turned into something resembling a house party—the spoken part did end up being the highlight.

“Listening to Nathan’s vows,” says Wang of her favorite part of the wedding. “It’s almost like getting to hear a secret with all your best friends around you.”

“Same,” adds Reese. “Not everyone feels comfortable reading vows or making that personal statement in front of a lot of people, but for us that was the core of the wedding; telling each other how we felt, and sharing that with the people we care about. And then the night afterwards was the cherry on top.”

Between the hot cheeto snacks, the guitar serenade at the altar, and the mix of traditional with modern, the couple’s wedding day isn’t really defined by any one cliché aesthetic. Instead, it was a day completely and unequivocally personal—which was really the plan all along. “Some advice that people gave me before the wedding that ended up being really true was when you’re up there and everyone’s looking at you, you should take a minute to look out and see everyone who’s experiencing it with you,” says Reese. “That’s a pretty powerful thing to see, everyone coming out in support of you; your whole community and family, people who have probably never been in the same room with each other. Stop for a minute and really experience that with your partner.”

CONNIE & NATHAN’S WEDDING BY THE NUMBERS:

Bags of Cheetos That Remained: