The whole townhouse is a crash course in color pairings. 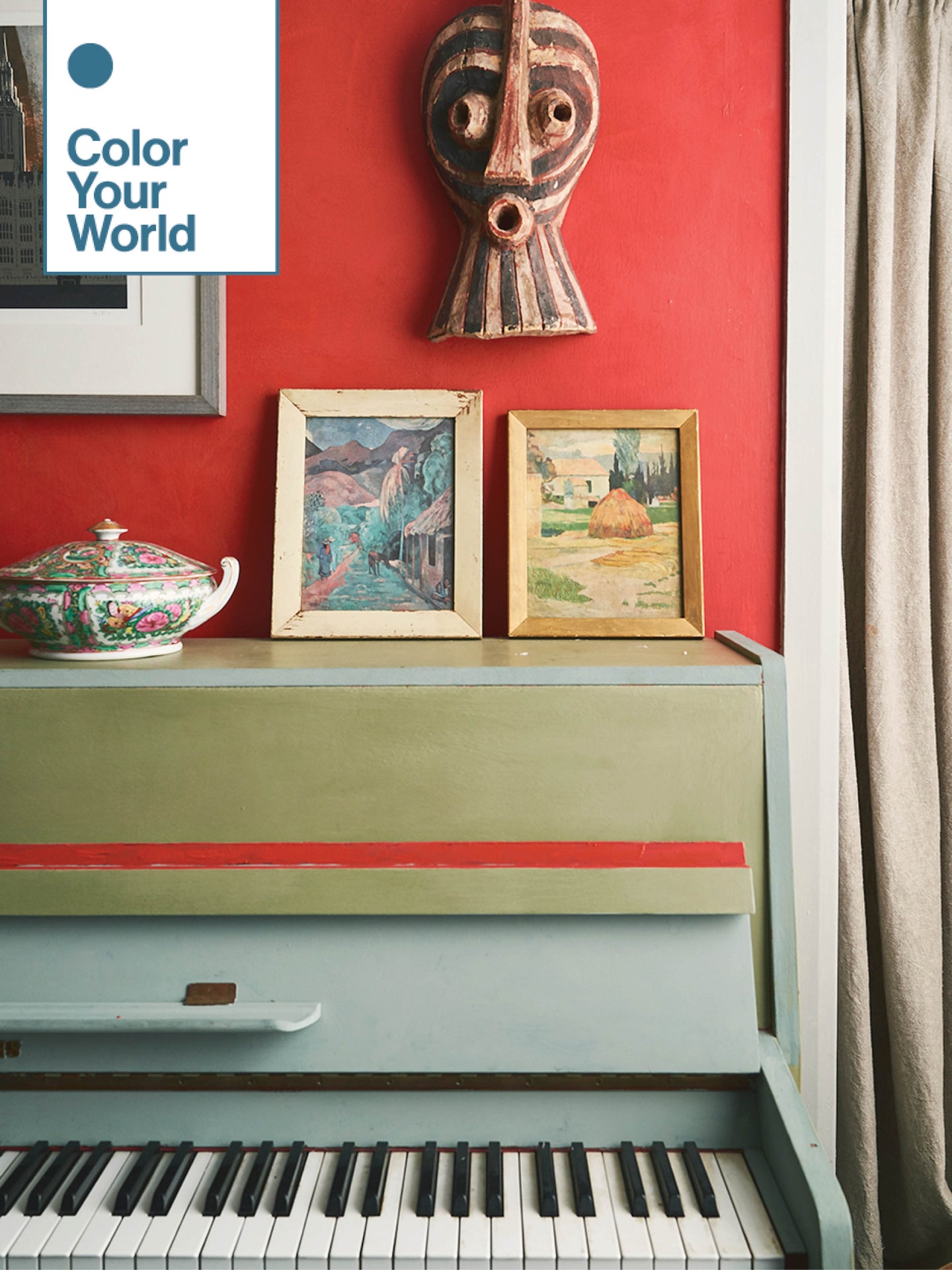 Annie Sloan can get away with a lot of color, and not just because she’s an expert in the area (she invented her revolutionary Chalk Paint back in 1990 and has authored and published more than 20 books on the matter). Her Oxfordshire, England, home welcomes it. “Sometimes you start with a palette and find it actually doesn’t work, and that’s been the case for every other house I’ve worked on or lived in,” she says. But the 1817 Victorian townhouse she and her husband, David, have called home since the early 2000s is an exception. Its southwest orientation prevents shadows from looming on the walls, so tones as punchy as a cherry red or as moody as a charcoal black look natural all day long. “It just works,” she says.

It was years before the couple decided to renovate the space. “When you make changes immediately, what you do is change your last house, not the one you’re in,” she explains. The only major addition came in the form of the breakfast room off the kitchen, now complete with a spiral staircase and a glass surround that offers views of the backyard. “The garden is very much a part of the house,” notes Sloan. But with the new, there’s still plenty of old: objet d’art passed down from her father, a headboard she and her husband built out of reclaimed wood, original ceiling moldings. Suffice to say, her house was cottagecore before cottagecore was cool. “I love getting back to chintz,” she says in approval of the trending style. “Then there are certain things I never want to bring back—macramé is one of them.”

Color combining is a talent of Sloan’s, but it even took her a while to come around to yellow and green—a duo that’s now the focal point of the foyer. “This house made me love it,” she says, noting how much brightness it brought to the basically windowless entryway. “When you come in, you just feel so joyful,” she says. Really the only spot in the entire house she didn’t paint herself is the English Yellow stairwell (the walls go up way too high for her to DIY).

The heavy dose of Antibes Green leading to the ground-level kitchen was inspired by a pre-COVID vacation Sloan took to Cuba (her Greek-Italian grandfather lived there for years). She brought the inspiration full circle by hanging paintings she sourced on her trip on the Antoinette pink wall.

advertisement
“When you make changes immediately, what you do is change your last house, not the one you’re in.”

In the kitchen Sloan freestyled an illustration of an acrobat on the backsplash—an art project she’s been meaning to protect with a glass cover but hasn’t gotten around to yet. “I was thinking about how the kitchen is the place where you magic stuff up,” she says of the design.

The low ceilings open up into a sunlit breakfast nook lined with plants. The greenery is there not only because it helps bring the garden vibe indoors, but it prevents the ledge from becoming a landing spot for clutter. “The problem with shelves is they end up a mess,” she says, laughing. Pens, drinking glasses, books, dirty dishes—she, her husband, and their three sons were all guilty of dropping their stuff there before the addition of the Graphite black trough made out of reclaimed pieces of wood (think: old picture frames, molding, and bits of chairs). Today it’s the perfect place for her houseplants to thrive. “I wonder if I hadn’t done what I do now if I would have been a gardener,” says Sloan. “It’s a dream. I love having my hands in the earth.”

You’ll almost never catch Sloan parked in front of the television (though occasionally she’ll stream Netflix on her iPad), so the sitting room is very much a place that promotes quietness. The space features a combination of two soothing neutrals: French Linen (the walls) and a camel-toned hue dubbed Country Grey (the ceiling). “I often have the lights down quite low,” she notes. The backlit bookcases, stocked with small treasures from her travels and family, like a bust her father gave her, create the right amount of ambience. “I just wanted a sort of cocoon,” she says.

advertisement
“I wonder if I hadn’t done what I do now if I would have been a gardener. It’s a dream.”

In some corners, art is the star; in others, it’s the wall itself that’s the shining moment. One of the easiest ways to add texture to a surface is varying how hard you press on a foam roller, notes Sloan. The technique results in a cloudy, plaster-like finish, as seen in the space above. “People always ask me: What did you do there?” It’s just the way you put it on,” she says matter-of-factly.

Until Sloan swathed the dining room in a bright red hue dubbed Emperor’s Silk, it was a “dead zone” or “no-man’s-land,” as she puts it. “It’s not a very big room with not very high ceilings, so it needs to feel alive,” she explains of wanting to draw guests in. The color has a waxed sheen on top of it that gives it an almost lacquered look, but the real trick to pulling off a color as bold as this on all four walls is to hang tons of pictures. “It disappears,” she says. The nearby piano wasn’t necessarily a precious heirloom, so she painted the piece with a pop of the same red and a heavy dose of Château Grey.

While splashy red was a solid fit for the dining room, Sloan steers clear of warm hues in the bedroom, including bright whites. “I want something deep and nonchallenging,” she explains. The palette is an ode to Versailles, featuring grayish greens, muted violets (all the fabrics are Annie Sloan designs), and hints of gold.

In the bathroom, it’s another story. Specifically, one that recalls warm days in Normandy, France, where she and her family have a farmhouse. “I’m hoping to get back there this summer,” she says. In the meantime, you’ll find her at home—if not in the garden surrounded by her blossoming geraniums, then inside with a paintbrush in hand.

My favorite vintage shop: I have bought from the French @antiquities_quattrocento Instagram account recently, and I’m always on the lookout for stuff from my stockists and Etsy, too.

Where I get all my gardening supplies: New Covent Garden Market is where I buy things wholesale for events but Bunker Hill Garden Shop is my favorite, as it has a crazy mix of the usual and unusual. Waterperry is an absolute must when it’s a beautiful day out.

The object in my home that gets the most use: The kitchen table that’s painted all over with leaves. I eat, work, and paint at it.

The textile that is so me: I love my Shine Shine cushions.

If I could go back in time… I’d love to have lived in Paris in the 1930s with the artists and the intellectuals. No earlier than 1928 and the invention of penicillin, though.