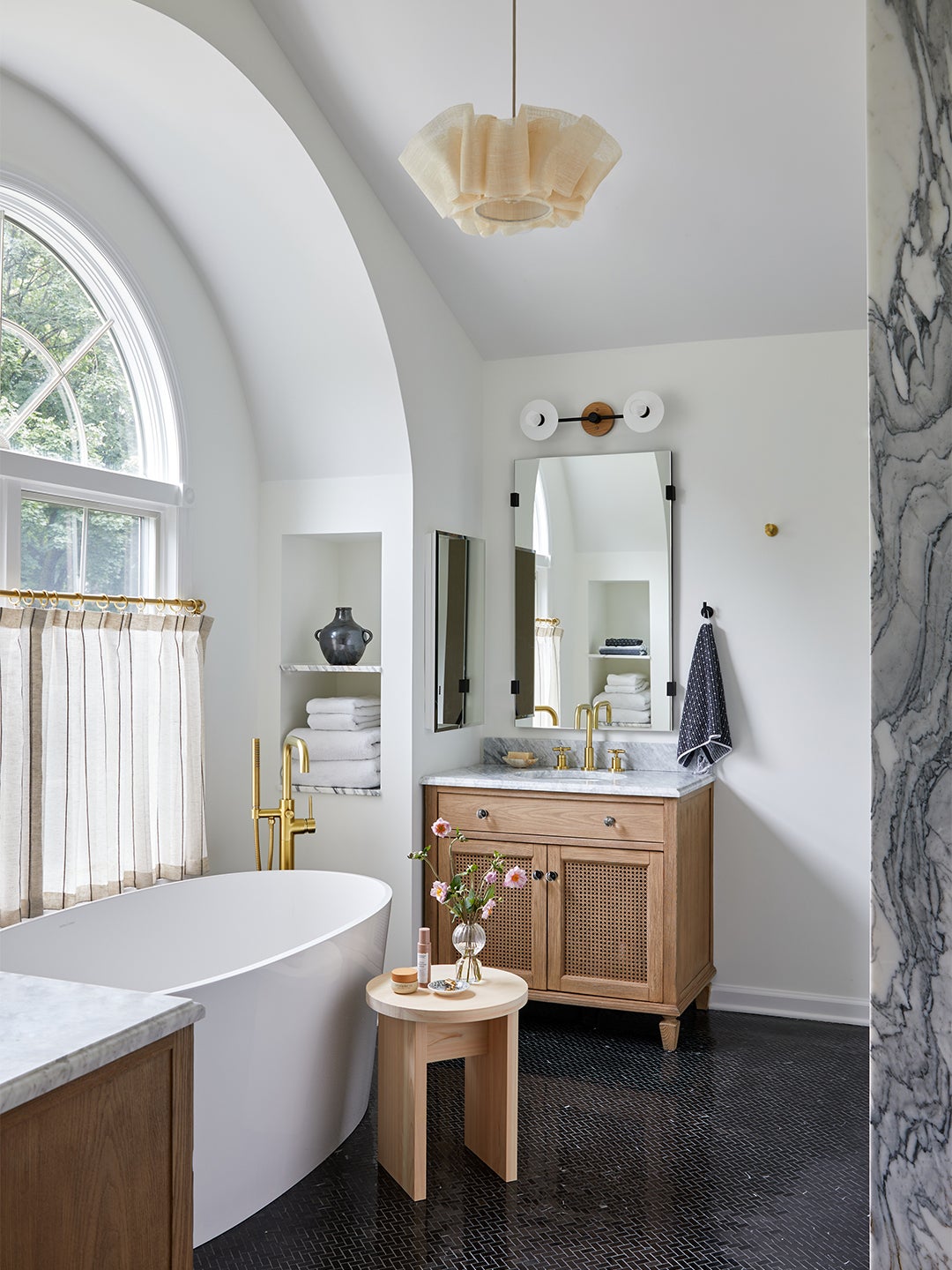 Like so many parents, this Livingston, New Jersey, couple had put off renovating their en suite bathroom in favor of updating rooms that their family—they have three children, ages 7, 4, and 1—would enjoy together. But after several years of starting and ending the day in a 20-year-old beige primary bathroom with an awkward layout and next-to-nothing storage, it was finally their turn. “They said, ‘Do your magic and let’s create something awesome,’” says New York City interior designer Rachel Sloane Sherman.

First, Sherman tackled the floor plan, moving everything but the shower. “We came to the realization that there were plumbing lines in every corner, which gave us flexibility,” she says. Then she layered natural materials and textures—marble, ceramic, wood, linen—for a feel she describes as “more organic than polished.” Here’s a peek into her process.

Play Up Architectural Elements That Work

By framing the half-round window with an archway, Sherman softened the angles of the pitched ceiling and created an alcove for the new freestanding soaking tub, which the couple and their three children bliss out in. On either side of the arch, she inserted marble-lined built-ins for grabbing towels without a single drip on the tile floor. The curve of the window doesn’t lend itself to full-length drapery, but semi-sheer linen café curtains provide all the privacy the family needs while still letting natural light through.

“When you walked into the bathroom, the first thing you saw to your left was the toilet,” says Sherman. The view through the doorway wasn’t much better: a wall of wonky right angles where the Jacuzzi tub and shower stall met. The designer’s solution? Tuck the toilet into “a proper water closet with a pocket door,” then frame the entrance with wide slabs of Calacatta Fantastico marble. Now the stone’s standout blue-gray veining is the focal point.

Think Outside the Double Vanity

The new water closet and bath alcove left few options for squeezing in a double vanity, so Sherman decided to install two single sinks opposite each other, flanking the tub. No storage—or symmetry—was sacrificed in the process. Each side has a drawer-topped cabinet plus a mirrored medicine cabinet on the side (the more places to hide things, the better). Sherman’s trick for making the store-bought vanities feel custom: “We just swapped out the hardware for glass knobs that worked with the rest of the brass and black finishes.”

Use Every Sliver of Your Marble Slab

To stay within the couple’s budget, Sherman kept the shower in its original corner but converted its footprint from an angular walk-in to a sleek, extended rectangle. The savings didn’t stop there: She also put the offcuts from the water closet trim to use as a shower bench and two-tier storage niche. “A lot of times, clients come in and they want a beautiful marble primary bath. In this instance, instead of making the full experience marble, I wanted to use it as more of an accent,” she explains.

“They’re a very stylish couple, and I wanted to give them something neutral enough that they wouldn’t get sick of it,” Sherman says of the room’s monochrome color scheme. Yet the space never feels stark. The secret is in the designer’s material choices—polished herringbone Nero Marquina floors and chalky white zellige tile in the shower reflect light. Then there’s the smattering of pottery and artwork, which, yes, Sherman argues, belong in a bathroom. “You need that beautiful extra layer that makes it feel like part of the home versus a forgotten space.”